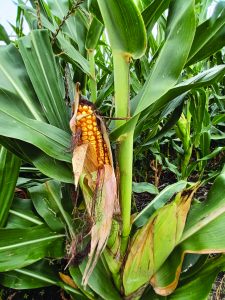 A busy week in Illinois agriculture was highlighted by increased funding for farm conservation programs, a waiver on highly combustible fuels in response to a refinery fire, and preparation for the 2023 harvest. For a clearer peek between the rows, please read on …

SPRINGFIELD — The shuttering of an Indiana BP facility that provides fuel for Midwest gas stations will open the door to more corn-based ethanol usage under an emergency waiver of federal fuel regulations from the United States Environmental Protection Agency. The governors of Illinois, along with Indiana, Michigan, and Wisconsin, requested and were granted the emergency waiver through Sept. 15 as a result of a massive electrical fire at the Indiana BP facility on Aug. 24.

“This coordinated effort with our neighboring states will reduce the chance of disruptions and keep the people and businesses of Illinois moving,” said Illinois Gov. J.B. Pritzker, in a news release announcing the temporary waiver allowing “high volatility” gasoline, including ethanol blends, to be sold during the summer months. In addition to reducing fuel disruptions, the waiver signals the need for more corn-based ethanol, a lower emission alternative to fossil fuels.

“The Illinois agricultural and ethanol industries are poised to help motorists maintain a steady supply of liquid fuel in the face of the tragic burning of the BP refinery,” said Marty Marr, president of the Illinois Corn Growers Association and a corn grower from New Berlin. “Because locally grown and produced biofuels can displace a large percentage of petroleum fuel, motorists can feel confident that they are not only purchasing an available, safe, high-quality fuel, but also that they are saving money at the pump and cleaning the air when they drive. Ethanol has 40-45 percent fewer greenhouse gas emissions than gasoline without ethanol, making this interim change to include more biofuels in our fuel supply a positive one for the environment.”

No one was injured in the blaze at the Whiting BP facility, which produces 430,000 barrels per day and provides fuel for Indiana and neighboring states.

“We should be funding this at a higher level,” said Durbin, a member of the Senate Ag Committee. “I’m hoping this new farm bill is an opportunity to do that.”

When asked by IFB reporter Timothy Eggert if he expects additional conservation dollars to be included in the 2023 farm bill on top of funding outlined in the new law, Durbin said, “Historically, each year, we put more money in conservation — I’m confident we’ll do it again.”

URBANA – Corn should be matured across much of Illinois around mid-September despite a delay in spring planting experienced by many growers. This is according to University of Illinois crop scientist Emerson Nafziger, who credits an unusually dry and hot summer for allowing corn to “catch up” in maturity after late planting.

“The 2022 Illinois corn crop was planted about two weeks later than normal, but slightly above-normal temperatures this summer have helped move crop development along,” said Nafziger, of the U of I’s Department of Crop Sciences. “The crop is only a few days behind normal as it reaches late grainfilling stages and maturity. With the forecast for warm weather to continue into September, we can expect the majority of the crop to reach maturity by mid-September.”

Nafziger added that overall corn yield prospects have not decreased much as the result of unfavorable weather in Illinois. “The August 1 estimate for Illinois corn yield is 203 bushels per acre, up one bushel from 2021. The crop condition rating has been around 70 percent good+excellent since pollination, which is similar to the rating in recent years except for 2019.

“Many people in drier areas have noted “tip-back” with kernels not developing on some length of cob at the ear tip. That is partly offset by good ear counts, and by the fact that canopies have remained intact with good color in most fields, so kernels should reach at least normal size.”

Though maturity, doughing and denting were all behind in progress, corn condition was looking good with a rating of 24 percent fair, 49 percent good, and 20 percent excellent across the state.