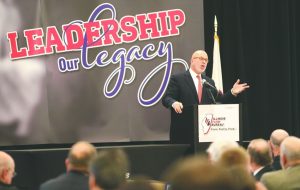 The final county production and yield estimates for Illinois have been published, revealing the effects of 2019’s wild weather year on harvest numbers — we will highlight the reports and compare them to past year’s yields. Also this week: last year’s Fall Covers for Spring Savings cover crop incentive program was so successful, more acreage has been added for 2020. And what did CNN’s Michael Smerconish advise Illinois farmers last week about the 2020 election? Read on to find out …

SPRINGFIELD — Final 2019 Illinois corn and soybean production and yield estimates were released Feb. 20 by the USDA National Agricultural Statistics Service, illustrating the effects of a delayed and abridged growing season. Corn and soybean production, yield and harvested area were all below recent years’ levels, as the report reflects when compared to past USDA final yield reports.

As for soybean, 2019 total area harvested was 9.9 million acres, well below Illinois farmers’ 2018’s harvest of 10.8 million acres. Yield, at 54 bu./acre, was off pace from last year by 9.5 bushels, while production, at 532.4 million bushels, was 20 percent less than 2018 Illinois production. McLean County led all individual counties with 18.1 million acres of soybean production in 2019.

Illinois farmers claimed a record 1.5 million acres of unused cropland in 2019 under USDA prevented planting insurance due to the inhospitable planting season, accounting for a large share of the unplanted acres.

DEKALB — Illinois farmers’ desire to plant cover crops as a way to enhance nutrient retention and improve their soils outpaced the number of acres allotted for enrollment in the state’s second annual Fall Covers for Spring Savings cover crop incentive program. According to program originator American Farmland Trust, farmers are taking it one step further by planting additional cover crop acres despite the cap, hoping it will incentivize further funding for the program in next year’s agriculture department budget.

The FCSS program was created to promote cover crop utilization by offering a cash incentive of $5 per acre for farmers who plant covers on acreage not already rewarded through other state or federal programs. The Illinois General Assembly approved a new line item in the Illinois Department of Agriculture 2020 budget that provided $300,000 — enough money to fund 50,000 acres plus expenses — to fund the FCSS program. This year’s funding allotment was claimed within seven days of its launch.

“We have done cover crops without EQIP or CSP and it has been out of our pockets,” noted farmer Andrew Rueschel, who is enrolled in the program, in an AFT news release. “I was excited about this program because there was an opportunity to receive a crop insurance discount on 100 percent of my cropland acres that are completely planted in cover crops.”

BLOOMINGTON — CNN political commentator and Sirius XM Radio host Michael Smerconish was the keynote speaker at the recent Illinois Farm Bureau Governmental Affairs Leadership Conference. After praising farmers for their resilience, conversation turned — of course — to the 2020 election. As for the Democratic nominee, “My hunch is that it could be (Michael) Bloomberg and Bernie (Sanders) battling it out,” Smerconish said.

Smerconish also offered advice on how best to consume media reporting leading into the election: “So many of us are siloed in … you’re getting all of the same information from the same sources. The best thing we can do is mix it up. Get our news and information from a variety of sources because somewhere in the middle lies the truth.” (IFB news service)

CHAMPAIGN — Local FSA offices will be busy this week serving farmers rushing to declare their ARC-PLC choices now that the Feb. 20 USDA 2019 Illinois County Crop Estimates report has clarified county production levels. Add in the Feb. 28 deadline for general signup for the Conservation Reserve Program, and you have a mix for mayhem.

USDA is marking the 35th anniversary of the CRP program by lauding its many successes, including preventing more than 9 billion tons of soil from eroding, enough soil to fill 600 million dump trucks. In addition, the CRP is credited with reducing nitrogen and phosphorus runoff relative to annually tilled cropland by 95 percent and 85 percent, respectively.

Along with this week’s CRP sign-up deadline, the Illinois USDA Natural Resources Conservation Service has established deadlines for applying for Environmental Quality Incentives Program funds. Producers are encouraged to submit applications by March 20 and April 17 if interested in the program, which is the primary financial assistance conservation program offered by USDA.

Producers must submit signed applications to their local NRCS field office. If their application is ranked high enough to be funded, NRCS staff will work with the applicant to develop a contract.

“NRCS has a long history of conservation planning with agricultural producers and forestry managers,” said Ivan Dozier, Illinois state conservationist with USDA-NRCS. “We have the technical knowledge to develop a conservation plan for your resource concerns and NRCS conservation programs that are available to implement that plan.” (Illinois NRCS/USDA news)