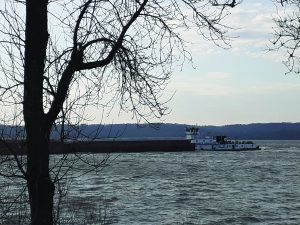 The Penny Eckstein, a Marquette Transportation tow, pushes barges through choppy waters on the Illinois River on March 28. The American Jobs Act contains funding for waterways infrastructure improvements, according to IIllinois Corn. (Photo by Tim Alexander)

This week’s peek at the week’s top farm and rural headlines includes farm machinery road safety during harvest, along with brief examinations of Illinois agriculture’s view of the Biden administration’s American Jobs Plan and STEP Act. Please plow on at your leisure …

SPRINGFIELD — The Illinois Department of Labor is urging motorists to observe caution when encountering farm implements on roadways during the busy planting season. Speed, impatience, and left-hand turns are the leading causes of many accidents involving farm machinery, according to Michael Klenik, IDOL director.

“Agricultural commodities generate more than $19 billion annually to Illinois’ economy, and that translates to a lot of activity in the fields this time of year. It’s a time for all of us to be aware that large farm machinery is on the roads and to be aware and patient when we encounter them,” Klenik said in an April 7 news release. “Everyone practicing patience and common sense will make for not only a productive planting season but also a safer one.”

Drivers should take precautions as they approach farm vehicles on the road as operators have limited visibility to the rear. Anyone passing such a vehicle needs to use extreme caution, Klenik added. (Illinois e-News)

SPRINGFIELD — In addition to cautioning motorists to slow down and observe safety precautions around farm machinery on roadways, the Illinois Department of Labor is reminding farmers of their legal obligations when operating large, slow-moving machinery on public roadways. According to Illinois law, all agricultural vehicles must display a fluorescent-orange Slow Moving Vehicle triangle. Tractors and other self-powered farm vehicles must have proper lighting. In addition:

“Likewise, safety experts caution farm workers not to ignore their own needs while rushing to get the spring crop planted. Three words sum up good safety protocol: Rest; nutrition; and hydration. Taking the time to eat, stretch your legs and keep hydrated can make a big difference in safety,” an IDOL news release stated, in part. (Illinois e-News)

BLOOMINGTON — Farmers should be concerned about a “transfer tax” within the STEP Act that would affect estate transfers, according to the Illinois Farm Bureau. In a recent call to action to IFB members, President Richard Guebert Jr. said the tax would financially burden farm families in Illinois and elsewhere.

“It wouldn’t take many acres of farmland, farm machinery and equipment, buildings or grain bins to trigger the extremely low $1 million asset threshold. Several years ago when the threshold was lower, many family heirs were forced to sell the land they inherited to pay the estate taxes. This proposal to eliminate stepped-up basis would have the same detrimental effect,” Guebert said.

The proposed legislation would allow for a tax on capital gains at death and eliminate stepped-up basis as a way to raise revenue for government spending, according to the IFB call to action. Stepped-up basis allows a farmer to pay capital gains taxes only on a property’s increase in value since the time that land was inherited, rather than paying the full increase in value since the land’s initial purchase by a relative.

According to the Institute for Policy Studies, the STEP Act allows the first million dollars of appreciated assets to pass at death without triggering income tax. Family members who inherit farms or small businesses they intend to continue operating will have 15 years to pay any income tax.

BLOOMINGTON — The Illinois Corn Growers Association issued an optimistic statement regarding the Biden administration’s American Jobs Plan to rebuild the economy and invest in rural communities. The ICGA lauded the inclusion of $17 billion in investment for inland waterways, coastal ports and land ports of entry. The proposed investment is crucial, according to Illinois Corn, in repairing and maintaining waterways infrastructure, such as locks and dams, that facilitate the movement of agricultural products.

“While this is a huge step in the right direction, we are still waiting to hear where the funding for these projects will come,” the organization stated. “Illinois Corn recognizes that the money to support these projects will have to come from somewhere and it is our hope that the sources of this funding do not negatively impact agriculture.” ICGA also touted the American Jobs Plan’s inclusion of funding to improve rural broadband and repair highways and bridges, which are issues critical to rural communities.

BLOOMINGTON — Next week is the Illinois Stewardship Alliance Virtual Food and Farm Week of Action, uniting small farms, small businesses and local food vendors. Attendees will be supporting the legislation of the Alliance’s 2021 Policy Agenda, which includes growing the number of farmers and local food businesses in Illinois, revitalizing communities, protecting soil and water and keeping food dollars local.

The event kicks off with a virtual lunch hour on Monday, April 19, setting the stage for more than three days of virtual constituent meetings (available by reservation) with at least 15 state senators and representatives. Learn more at www.ilstewards.org/weekofaction/.

Illinois is home to 27 million acres of farmland. (Illinois Department of Labor)