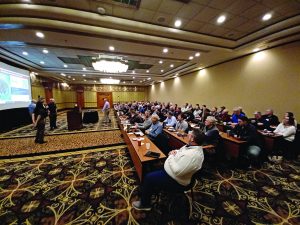 Dozens of central Illinois farmers attended the 2023 Farm Economics Summit in East Peoria on Jan 11. They heard Jonathan Coppess and the U of I farmdoc team discuss the 2023 Farm Bill and other matters. (Photo by Tim Alexander)

In this week’s wintery mix of farm and rural news we celebrate Illinois farmers’ nation-leading 2022 soybean crop, and take a look at how Illinois figures into farm bill spending. For more on these and other news items of interest to farmers and those interested in agriculture, please read on …

“This announcement is more than a newsworthy headline; it represents the lineage, hard work, and contributions of 43,000 farmers,” said Steve Pitstick, a Maple Park soybean producer who serves as chairman for the Illinois Soybean Association (ISA). “This celebration belongs to every soy grower — and every soy family — across Illinois. Congratulations on a job well done!”

Pitstick says ISA’s three-pronged approach to supporting a thriving soybean industry — agronomy, domestic and global market development, and local, state and national government relations — are the key ingredients when it comes to the recipe for raising a record soybean crop. (ISA news)

EAST PEORIA — Speaking at the 2023 Illinois Farm Economics Summit in East Peoria, University of Illinois farm economist Jonathan Coppess said negotiations for the next farm bill will soon begin in the House Committee on Agriculture — providing Republican leadership can resolve their differences and work together. He told the central Illinois farmers in attendance that a finished 2023 Farm Bill could have trouble passing the House due to certain factions, such as the Freedom Caucus, who have vowed to slash federal spending across the board.

Coppess also presented a look at how Illinois stacks up with the rest of the nation in farm bill funding compared with other key agricultural states. Overall, Illinois received 4.3 percent of total funding for the 18th Farm Bill from 2018-22, good for fifth in the nation in overall spending.

“For conservation programs, we’re actually in the top three states with 5.2 percent of the national total. With crop insurance, as you all know too well, we’re in a unique space because farmers in Illinois tend to pay a little more for crop insurance than in other states. We’re on the bottom of the stick. Illinois farmers paid $600 million more in federal crop insurance premiums than they received, ranking next to last other than Iowa.”

A key issue to keep an eye on as farm bill negotiations progress is whether Congress will slash conservation and climate funding for the 2023 Farm Bill due to historic investments in climate-smart agriculture made through the Inflation Reduction Act of 2022, according to Coppess.

SPRINGFIELD — Illinois Farm Service Agency Director Scott Halpin notified farmers that his office has begun issuing $255 million in payments to eligible 2021 Agricultural Risk Coverage and Price Loss Coverage program participants. He also reminded producers that March 15 is the deadline to register their ARC-PLC choice for the 2023 growing season. If producers do not submit their election by the deadline, their farm safety net election remains the same as their 2022 election for crops on the farm.

“Also, the FSA farm loan teams in Illinois are already working on operating loans for spring 2023 and asks potential borrowers to submit their requests early so they can be timely processed.  The farm loan teams can help determine which loan programs are best for each applicant,” Halpin said, noting that USDA “micro-loans” are key to helping those new to agricultural production get started in the industry.

“Farmers can use USDA farm ownership microloans to buy and improve property. These microloans are especially helpful to beginning or underserved farmers, U.S. veterans looking for a career in farming, and those who have small and mid-sized farming operations. Microloans have helped farmers and ranchers with operating costs, such as feed, fertilizer, tools, fencing, equipment, and living expenses since 2013,” Halpin explained.

“Microloans can also help with farmland and building purchases and soil and water conservation improvements.  FSA designed the expanded program to simplify the application process, expand eligibility requirements and expedite smaller real estate loans to help farmers strengthen their operations.  Microloans provide up to $50,000 to qualified producers and can be issued to the applicant directly from the USDA Farm Service Agency.”

SPRINGFIELD — An additional 20,000 acres has been added to the Illinois Department of Agriculture’s  2023 Fall Cover for Spring Savings program. The application period for the program ended on Jan. 15, with 828 applications accounting for 182,688 acres applied for. This surpassed the allotted 140,000 and established a record for acres requested, according to IDOA Director Jerry Costello.

“This exemplifies the Governor’s priority on maximizing resources for the betterment of the state,” said Costello. “I want to thank our partners at the Illinois Environmental Protection Agency, as well as our IDOA staff for leveraging dollars for greater federal funds.”

Through the program, which was established in 2019 with 25,000 acres, eligible applicants will receive a premium discount of $5 per acre on the following year’s crop insurance for every acre of cover crop enrolled. Applicants are required to certify that their cover crops are approved through their local Farm Service Agency office before applying, and the program is only applicable for those with coverage through the United States Department of Agriculture Risk Management Agency crop insurance program. (IDOA news release)

Illinois soybean yields did not set a record in 2022, coming in one bushel below the record 65 bushel per acre yield set in 2021. (University of Illinois farmdoc)