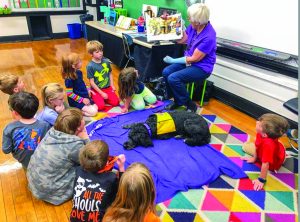 An Illinois farm dog who moonlights as a therapy animal is a finalist in the AFBF’s farm dog of the year contest. (AFBF photo)

Thanksgiving week has farmers looking ahead to their 2023 production plans, and one thing is certain: there is no certainty regarding the usage of an effective weed killer, dicamba. We also have an update on the average price of the turkey dinner many of us will enjoy on Thursday (spoiler alert: it’s higher than last year). Please read on …

SPRINGFIELD — As producers look ahead to their 2023 production plans, uncertainty remains as to whether they’ll be able to utilize a very popular, yet controversial, herbicide — dicamba.

“Director Costello did reconfirm that there will be no changes to the dicamba label coming for the 2023 season from IDOA. The department is still waiting for EPA to make a final decision on the dicamba label for the 2023 season,” Johnson said in an update to IFCA members. “DOA interacts with EPA on a regular basis and EPA has yet to show their cards. IFCA has also reached out to EPA on a decision, and they are also giving us no more clear direction. As soon as IFCA gets any information on what the 2023 dicamba label looks like, IFCA will pass this on to our membership.”

In other IFCA news, the association is co-hosting a 4R meeting focused on the Lake Springfield watershed on Dec. 7. The “Water Quality and Economics of Conservation Practices” meeting will offer updates on the status of the lake, as well as estimates of the economics involved when implementing different conservation practices. There is no charge to attend this event at the Prairie View Reception Center in Chatham, which begins at 6 p.m. Contact jason@ifca.com for more information on the event, or to register to attend.

Year-end surveys go out to farmers

SPRINGFIELD — With the 2022 growing season over, the U.S. Department of Agriculture’s National Agricultural Statistics Service is contacting farmers to gather final year-end crop production numbers and the amount of grain and oilseeds they store on their farms. NASS is also contacting grain facility operators to determine grain and oilseed stock in commercial facilities. The surveys are the basis for the official USDA estimates of production and harvested acres of all major agricultural commodities in the United States and grain and oilseed supplies, according to NASS Illinois State Statistician Mark Schleusener.

“Data from the survey will benefit farmers and processors by providing timely and accurate information to help them make critical year-end business decisions and begin planning for the next growing and marketing season,” said Schleusener. “Responses to the survey will be combined with the County Agricultural Production Survey data and used to calculate county yields. Farmers who receive this survey are not included in the County Agricultural Production Survey, so this is their only opportunity to be included in the calculation of Illinois county yields.

According to NASS, the information will be used for statistical purposes only and will not be disclosed in identifiable form. All NASS reports are available online at nass.usda.gov/Publications/. (USDA-NASS news)

BLOOMINTON — Though she might not be a master herder, an Illinois farm dog’s unique attributes have qualified her as a finalist in the American Farm Bureau Federation’s annual “People’s Choice Pup” contest. Bernice, a comfort therapy dog in Shelby County that helps children gain confidence reading and speaking, is a Bernedoodle, a mix of Bernese Mountain dog and poodle who also helps out herding livestock on her owners’ farm.

“Children will read to a dog more easily than they will to an adult,” said Sandy Brix, who along with her husband, John, owns Bernice. “I kind of sit in the background and they read to Bernice. If they get stuck, they’ll hold up the book like, ‘OK, what’s that word?’”

“We have selected five dogs who have interesting stories but they didn’t quite bubble up to the top of the contest,” she said. “Those are the contenders for this year’s People’s Choice Pup.”

BLOOMINGTON — It’s said that inflation has pushed the cost of food and many consumer goods upward by 13 percent in the past two years. The price of this year’s Thanksgiving meal has also risen by an average of 13 percent nationwide, according to the Illinois Farm Bureau and American Farm Bureau Federation, signaling that farmers aren’t to blame for the rise in food costs.

According to the farm bureau, Illinois shoppers participating in the 37th annual American Farm Bureau Federation’s Thanksgiving Cost Survey reported a state-wide average price of $65.53, or $6.55 per person, for a standard Thanksgiving meal for 10. It’s an increase of exactly 13 percent over the previous year’s state average of $58.15.

“Illinois farmers know the role inflation has played over the last year in driving food costs higher. Farmers have been experiencing higher input prices for over 18 months,” said Illinois Farm Bureau President Richard Guebert, Jr, in a news release. “Increased fuel prices are a significant component of the distribution of food to consumers.”

Illinois’ Thanksgiving costs are slightly higher than the national average, according to the AFBF. The national cost of a classic Thanksgiving feast for 10 came in at $64.05, or less than $6.50 per person. It’s an increase of $10.74 — equal to a 20 percent increase over last year’s average of $53.31.

The AFBF Thanksgiving dinner survey was first conducted in 1986. The informal survey provides a record of comparative holiday meal costs over the years. The classic survey menu has remained unchanged since inception to allow for consistent price comparisons. (Illinois Farm Bureau)