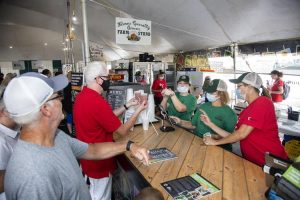 This just in: Illinois is expected to repeat as the nation’s leader in soybean acreage, production and yield; we will dissect the early projections from Kansas State University for you. We also have news about results from USDA’s 2021 NLRS study gauging farmers’ conservation efforts in Illinois. Please read on to unpack these and more news items for Illinois farmers and rural dwellers …

URBANA — Illinois will again lead the nation in soybean acreage, production and yield per acre, according to projections issued by the Kansas State University Department of Agricultural Economics. KSU ag economist Gregg Ibendahl based his findings on USDA crop acreage and condition reports for the 18 top soybean producing states, along with an index to determine deviations between past USDA in-season estimates and final yield and production statistics.

Illinois is on pace to claim top U.S. soybean yield for 2022 with an estimated harvest of 60.2 bushels per acre, which bests Nebraska, at 59.5 bu./acre, and Iowa, at 58 bu./acre, according to Ibendahl’s predictions, which were published by the University of Illinois farmdoc team on Aug. 4 (Ibendahl, G. “An Estimate of Soybean Production From the 18 Leading Soybean States.” farmdoc daily).

In addition, Illinois is expected to lead the nation in soybeans harvested by state, with 11.1 million. This would give Illinois an edge over Iowa, where farmers are expected to harvest 10.2 million soybean acres, and Minnesota, with 7.4 million acres. Illinois is also projected to lead in total soybean production by state, with a harvest of 668 million bushels. Iowa is predicted to finish second with a 593 million-acre soybean harvest. Minnesota is picked a distant third with an expected 368 million-acre soybean harvest, the report stated.

SPRINGFIELD — The USDA National Agricultural Statistics Service released the results of their 2021 survey of 1,095 Illinois farms about field nutrient use as part of Illinois’ Nutrient Loss Reduction Strategy. With a focus on reducing loss of nitrogen and phosphorus through leaching and runoff, the NLRS, issued in 2015, includes a list of cultural practices that producers are encouraged to adopt or expand to preserve nutrients in their fields.

Survey respondents were provided a map of Illinois with Maximum Return To Nitrogen nutrient application rates for three regions in Illinois, with MRTN threshold rates for corn-after-corn acres and corn-after-soybean acres. Respondents were asked to report the number of corn acres they fertilized at or below the MRTN rate for their region of the state.

In addition, the survey showed that farmers used a nitrification inhibitor on 85 percent of corn acres that were fertilized with anhydrous ammonia in the fall or winter. For anhydrous ammonia used in the spring, that ratio was 83 percent.

BLOOMINGTON — The Soil and Water Outcome Fund, an emerging agricultural carbon market, is opening enrollment for farmers in several Illinois counties. According to an Aug. 3 news release from the Illinois Soybean Association, rather than provide farmers payment for practice implementation, the SWOC provides payment for the multiple environmental outcomes of new conservation practices. These outcomes include water quality improvements and carbon sequestration.

Farmers interested in more information on the SWOC or wishing to enroll should visit www.theoutcomesfund.com/enroll or contact conservation agronomist Kevin Schabacker at (779) 861-2979. Applications for enrollment must be submitted by Sept. 1.

SPRINGFIELD — If you’re planning on visiting the Illinois State Fair during its 11-day run from Aug. 11-21, a stop at the Illinois Specialty Growers Association booth in the Illinois Department of Agriculture tent is a must-do. Craig Tanner of Tanner Orchards in Speer will be delivering hundreds of gallons of their famous fresh apple cider to the ISGA booth, as will Curtis Orchard of Champaign, for use in apple cider slushies. Along with vanilla ice cream from Prairie Farms Dairy, farm-fresh items available inside the tent include watermelon from Frey Produce, sweet corn from Piscasaw Gardens of Harvard and peaches from Eckert’s Family Farms.

According to the Illinois Farm Bureau, fair visitors will have a chance each day to learn about a different facet of specialty farming, such as hydroponic strawberry production or building farm-grown flower bouquets. The “Meet the Farmer” schedule is: Aug. 12 and 13, Piscasaw Gardens; Aug. 14, Growing Healthy Veterans; Aug. 15, We Sow We Grow; Aug. 16, Mariah’s Mums and More; Aug. 17, Grand Oak Farm Artisan Bread; Aug. 18, Kristen’s Pumpkin Patch and Corn Maze; and Aug. 19, Christ Orchard.

The food tent will operate from 10 a.m. to 6:30 p.m. daily, except for on opening day. On Aug. 11, the hours will be 4-6:30 p.m. Illinois Farm Bureau is sponsoring the tent’s stage that will provide ag-based demonstrations and information for fairgoers. For a Meet the Farmer schedule, visit bit.ly/3os2tVs.

The 2022 Illinois State Fair theme, “Grow With Us,” is reflective of the importance of agriculture to the state and also calls attention to the $58 million Fairgrounds improvement effort that is underway in Springfield. (ISF/Rebecca Clark)