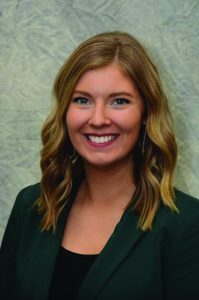 2022 Transitions: Jenny Ring was known as Jenny Jackson when she first was introduced as communications director for Illinois Pork five years ago. She’ll soon be moving on to a similar job within the Illinois agriculture industry. (Illinois Pork photo)

For our first column of 2022, we look at some of the top issues facing Illinois farmers in the new year. We also have a look back at the amazing contributions of Illinois pork producers in feeding the hungry in our state during 2021.

U of I: Exports will determine ’22 crop profitability

URBANA — As we reported in this column last week, University of Illinois farm economists have projected break-even prices for 2022 crop production at $4.73 per bushel for corn, and $11.06 per bushel for soybeans. During the 2021 Illinois Farm Economics Summit, held virtually in December, U of I economists also projected crop profitability for the coming year.

“The profitability of corn and soybean production in 2022 will depend on continued strength in output prices. Rising input costs, particularly for fertilizer, are squeezing projected margins,” according to Scott Irwin and Joe Janzen, with the U of I Department of Agriculture and Consumer Economics. “Demand for U.S. corn and soybeans in global markets remains somewhat uncertain. How much of the current crop is actually exported will determine the level of ending stocks for this marketing year and the state of play for the 2022 crop.”

The analysts noted that if actual crop sales plus accumulated export shipments follow historic trends between now and the end of the current marketing year in August 2022, U.S. corn and soybean exports can be expected to meet or slightly exceed the projections from the latest World Agricultural Supply and Demand Estimates report.

“However, exports form only one leg of the three-legged stool of corn demand. Robust domestic ethanol and feed use of corn continue to underpin prices in the short run. The larger concern is that a combination of lower exports, higher ending stocks, and an increase in acres and production in 2022 would lead to prices for the 2022 corn and soybean crop that are closer to long-run average levels,” wrote Irwin and Janzen in an article accompanying their IFES presentation, “IFES 2021: 2022 Market Outlook for Corn and Soybeans: Part I, Export Sales.”

Ag Conservation, NLRS at threat in 2022?

DEKALB — Funding for crucial agricultural conservation programs in Illinois is on the line in 2022, according to Max Webster, Midwest policy director for American Farmland Trust. In addition, lawmakers will be looking for sustainable solutions to better equip farmers with new resources in order to make progress on Illinois’ Nutrient Loss Reduction Strategy, Webster said in a Dec. 28 email.

AFT is inviting Illinois farmers and producers to lend their voices of support to these vital programs during its first-ever virtual Policy Roundup meeting for members, scheduled for noon on Wednesday, Jan. 12. Webster will lead the discussion and walk participants through the process of becoming engaged in grassroots advocacy to help advance state agricultural conservation efforts.

Not an AFT member? Simply register for the meeting by phoning their DeKalb office at 815- 753-9347 and receive a free one-year membership. (AFT news)

SPRINGFIELD — A Dec. 21 report from the U.S. Environmental Protection Agency is sending shockwaves through the agricultural community. Though the EPA has said it is too late to make changes to the 2022 label for dicamba products, growers who use the popular herbicide are left wondering about the product’s fate — at least as an in-season weed abatement tool.

At issue: Even after regulatory and label changes to 2021 dicamba products, control measures implemented by the EPA have done nothing to change the “number, severity of geographic extent” of dicamba-related incidents of crop damage caused by careless usage of the product, according to the report. Nationwide, the EPA received some 3,500 dicamba incident complaints in 2021, resulting in alleged damage to more than a million acres of non-dicamba-tolerant soybeans, as well as off-target damage to other crops and non-agricultural landscapes, including a 160,000-acre wildlife refuge.

In Illinois, 336 alleged incidents of dicamba-related damage to non-tolerant crops resulted in damage to more than 66,000 acres, according to the Illinois Department of Agriculture, which has set a June 20 deadline for in-season dicamba applications.

SPRINGFIELD — Through its Pork Power: Partnering to Fight Hunger in Illinois campaign the Illinois Pork Producers Association donated 64,497 pounds of pork products to Illinois food pantries in 2021. Somewhere along the line the campaign, which is co-sponsored by the Illinois Corn Marketing Board and Illinois Soybean Association (ISA), provided the equivalent of its 3 millionth donated meal, according to an end-of-year news release recounting the partnership’s activities.

“Partnership with ICMB and IPPA is invaluable to us, and when we can leverage that partnership to support food banks that help those in need, it benefits everyone involved,” said Scott Gaffner, ISA director. “Together we help feed and fuel the world.”

Author’s note: Over the years this column has often mentioned the food banks and pantries that have received pork products donated by Illinois farmers and ranchers through the Pork Power program. This time around, we would like to acknowledge the processors in Illinois who contributed their time and talent to enable 2021 pork donations to reach food-insecure families: Eickman’s Processing Co. (Seward), Main Street Meats (Roscoe), Paris Frozen Foods, Inc.  (Hillsboro), Slagel Family Meats (Forrest), Steidinger Foods (Fairbury) and Turasky Meats (Springfield).

Anyone can learn more about the Pork Power campaign, including how to contribute, at www.ilpork.com.

SPRINGFIELD — A new year often brings transitions, and Jenny Ring, communications director for the Illinois Pork Producers Association for the past five years, is looking forward to a big one in 2022. Ring, known as Jenny Jackson when she first arrived at Illinois Pork, will be taking on the role of media relations manager at Rooster Strategic Solutions, a Lincoln-based marketing company specializing in agricultural issues, production, policy, and sustainability.

“I have thoroughly enjoyed working with local and nationwide agriculture media and I’m thrilled that I get to continue this journey but expanding my horizons outside of simply pork, and into the full array of agriculture!” Ring said. Congratulations, Jenny!