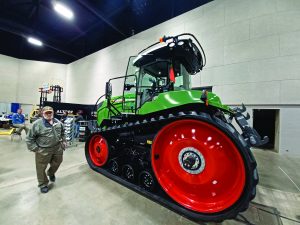 Though there weren’t as many tires (or treads) to kick as in years past due to the lingering effects of the pandemic, thousands of farmers turned out for the 40th Greater Peoria Farm Show. (Photo by Tim Alexander)

This week we offer a report and observations from the 40th Greater Peoria Farm Show, along with a roundup of the week’s top farm and rural news stories. Please read on …

PEORIA — A scaled-down version of the Greater Peoria Farm Show returned to the Peoria Civic Center Nov. 30 through Dec. 2, offering fewer vendors and product lines due to the ongoing repercussions of the COVID-19 pandemic. Show organizer Ron Bormaster reported that around 185 vendors participated in the 40th GPFS, down from more than 300 in years past.

Most notable was the reduced number of large machinery items on display, led by the conspicuous absence of the John Deere Company. Attendance estimates haven’t been released, but after attending two of the three days of the show this reporter can attest that not as many farmers came out compared to many past years. Bormaster, who works for GPFS sponsor Midwest Shows, told me that this is reflective of farm machinery shows across the country as companies gear back up following a year’s hiatus due to the pandemic. One problem, he explained, is that some larger companies simply cannot find enough personnel to staff their often-elaborate exhibition areas.

However, the mood of the show was decidedly upbeat. The vendors I spoke with remarked on the number of farmers they were able to connect with on a one-on-one basis. And though there weren’t as many tires to kick this year, Bormaster said that attendees were actively shopping for new equipment after a year away from farm shows, with cash in pocket thanks to higher commodity prices.

Here’s hoping that the show can eventually recapture its full past glory and once again occupy the entirety of the Peoria Civic Center.

PEORIA — The Peoria County Farm Bureau was on hand at the 40th Greater Peoria Farm Show to distribute free copies of their 2022 color calendars, which feature rural-themed photography contributed by PCFB members. The calendars feature 14 photos submitted by members for the PCFB’s 2021 photo contest, including the Best of Show entry by Kyle Plattner of Edwards depicting two girls watching a combine pick corn. It also highlights local events such as PCFB programs, 4-H shows and Peoria County Soil and Water Conservation District events, along with USDA crop reporting dates and FSA deadlines.

One free calendar is available for anyone who drops by the PCFB offices at 1716 N. University Street in Peoria. The office can be reached at 309-868-7070 or via email at office@peoriacountyfarmbureau.org. Additional calendars are $3 each.

ISA pitches in for lock and dam repair

BLOOMINGTON — The Illinois Soybean Association is among a coalition of farm groups to offer $1 million to help move lock and dam projects from the on-deck circle to the batter’s box. This is according to Mike Steenhoek, executive director of the Ankeny, Iowa-based Soy Transportation Coalition. Steenhoek reported that in addition to the ISA, donations have been offered by the United Soybean Board, Iowa Soybean Association, Iowa Corn Promotion Board, Minnesota Soybean Research and Promotion Council and the Missouri Soybean Merchandising Council in order to encourage tangible investment in the infrastructure along the upper Mississippi River.

Specifically, the offering would help underwrite the pre-engineering and design expenses of Lock and Dam #25, located in Winfield, Missouri. Widening the lock chamber at No. 25 would represent the first construction project within the new Navigation and Ecosystem Sustainability Program, which calls for the construction of seven new locks – five north of St. Louis on the Upper Mississippi River (Nos. 25, 24, 22, 21, and 20) and two on the Illinois River (La Grange and Peoria).

“Because of all the work over the years by a variety of agricultural leaders, the barge and towing industry, and so many other inland waterways stakeholders, we are on the cusp of achieving tangible results for a number of these important projects on the Upper Mississippi River,” said Steenhoek. “The team of inland waterways stakeholders are all working to ensure Lock and Dam No. 25 and other lock and dam projects will become a reality in the near future. The $1 million offer by farmers is a supplement to this overall effort.” (STC news)

SPRINGFIELD — Remember the losses suffered by farmers in May due to freezes? Those residing in McHenry, Lake and Boone counties in northern Illinois sure do. Last week, the USDA announced a secretarial disaster declaration for losses incurred between May 5 and May 30, enabling farmers in those northern Illinois counties to apply to the USDA Farm Service Agency for low-interest emergency loans.

“From flooding to drought and now freeze, Illinois farmers continue to show resiliency year after year,” said Jerry Costello II, Illinois Department of Agriculture Director. “Thank you to Secretary Vilsack and Governor Pritzker for continuing to give Illinois’ farmers the resources they need to come back from these situations.” Producers should contact their area USDA Service Center to file a Notice of Loss. (Illinois e-News release)

URBANA — Accidents on the farm can hasten mean the end of a productive career in agriculture. But when accidents resulting in disabilities occur, one group has helped farmers to continue their profession for many years. Illinois AgrAbility, a program that provides assistance to Illinois farmers with physical limitations and disabilities so they can maintain their independence and continue farming, recently acknowledged their 30 years of service to Illinois agricultural producers with a virtual celebration. Special recognition was given to individuals and organizations who have been central to the success of the program, including its longtime leader, Robert Aherin.

“The program assists our agricultural producers by providing them with adaptive and assistive equipment to keep them in the workforce,” said Shelly Nickols-Richardson, associate dean and director of Illinois Extension. “Agriculture is the foundation of our Illinois economy, so every farmer who is able to continue working provides benefit to all.” (Illinois Extension)

To support Illinois AgrAbility, visit www.giving.illinois.edu. Include the AgrAbility Farm Safety Fund (336120) in the giving form.

Since 1990, Illinois AgriAbility has directly assisted 800 farmers and provided education about assistive technologies and referrals to another 1,200 producers. (Illinois Extension)