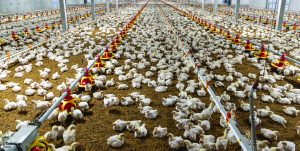 Late December, owners of poultry farms and other animal agriculture operations were preparing for a “deep freeze” event such as the one felt in Illinois during the days approaching Christmas.

RFD News and Views wishes our readers a happy and healthy new year! Here are some of the top year-end agricultural news highlights:

URBANA — ’Twas the night before Christmas 2022, and livestock producers across Illinois were busy checking on their animals’ welfare. In addition to livestock producers, owners of poultry farms and other animal agriculture operations were also preparing for a “deep freeze” event such as the one felt in Illinois during the days approaching Christmas.

“Depending on everyone’s set-up it’s a little bit different. But as cattle producers, our preparations are similar. In some cases they will put a calf jacket on some of the newborn calves,” said Tasha Bunting, livestock specialist for the Illinois Farm Bureau, and a cattle and sheep producer from Dwight. “With our modern hog farms, they are regulated so that as long as the power stays on and all things are working properly, it’s a matter of checking to make sure that those barns are operating efficiently and as they should. With chickens and backyard producers, making sure the flocks have plenty of feed and bedding is very important. This is very similar to how we (prepare) as livestock producers.”

Preparing shelter, extra bedding and feed, making sure water is available and ensuring that heaters are functioning are among the top things producers can do to protect their animals, according to Bunting, who farms with her husband, Jason, in Livingston County. “There is a lot of prep work depending on the weather Mother Nature is going to throw at us,” she said.

Brutal cold extended across much of Illinois

URBANA — Illinois State Meteorologist Trent Ford issued a summary of the Arctic-like weather conditions that gripped much of the state of Illinois during the week of Dec. 22-28. According to Ford, average temperatures in Illinois ranged from the single digits in northwest Illinois to the low 20s in southern Illinois, or between 15 and 20 degrees below normal during the week.

“Actual temperatures regularly dipped below zero across the state, including minus 15 in Knox and Mercer counties, minus 12 in Lee and Cook counties, and minus 11 in McLean and Champaign counties. Combined with 25-plus mph sustained winds and 45-plus mph wind gusts, wind chill values were in the minus 25- to minus 40-degree range. Although the temperatures and wind were not unprecedented for late December, they are fairly rare, occurring only once every 20 to 25 years,” Ford said.

The state meteorologist projected as much as 4 inches of precipitation this week in far southern Illinois, while cautioning of the possibility of some flooding. “Despite severe drought currently in the southern tip of the state, heavy precipitation on bare soils can induce some isolated flash flooding. With that said, at least the first inch or two of rain will be greatly beneficial to improving soil moisture conditions in southern Illinois,” Ford said. (Gleason, T. “Dec 29 | Weekly Weather Review & Forecast.” (Todd E. Gleason, Farm Broadcaster, University of Illinois Extension; Trent Ford, Climatologist, Illinois State Water Survey, Prairie Research Institute, December 29, 2022.)

SPRINGFIELD — The office of Illinois Gov. J.B. Pritzker issued a year-end news release calling attention to the accomplishments made by the administration in the area of agriculture during 2022.

“Illinois has always been — and will always be — an agricultural state. And this year, we continued to lay the groundwork for a thriving, sustainable agricultural industry for generations into the future,” said Pritzker. “From waiving all FFA dues for agricultural education students to issuing hundreds of cannabis licenses to social equity applicants, 2022 was full of firstsb — and we’re only getting started. My administration remains laser focused on growing and supporting our No. 1 industry, so that farmers and workers have the resources they need to put food on the table for the people of Illinois.”

The lengthy news release pointed out the accomplishments Illinois has achieved in many subcategories of agriculture, including the marketing of Illinois agricultural products. Marketing highlights included:

URBANA — A recent essay issued by the University of Illinois farmdoc team shed light on the massive amount of funding required to fund USDA staff and operations. Focused on the proposed 2022 “omnibus” bill currently before the lame-duck 117th Congress, the essay reveals the following:

The FY2023 omnibus bill also contains disaster relief supplemental appropriations for agriculture. Congress appropriated $3.7 billion for revenue, quality or production losses of crops (including milk), trees, bushes, and vines, “as a consequence of droughts, wildfires, hurricanes, floods and other natural disasters.” (U of I farmdoc)