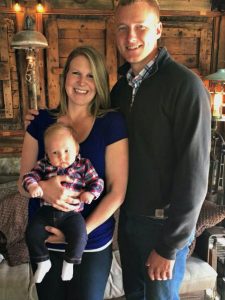 A recent blog by northern Illinois farmer Trent Sanderson (pictured, with family) discusses whether conventional or organic production would be best for your farming operation. The blog can be accessed on the Illinois Farm Families website. (photo provided)

Did you know it was recently National Agriculture Day? We have info on what it means and how it was observed last week. Also: the Peoria Civic Center was the scene of the 2018 National Alpaca show, which drew hundreds of alpaca enthusiasts and fiber artists from across the country; we have a report. In addition, we have news of how Illinois farmers are working to increase monarch butterfly habitat, while also fighting to keep the insect off of the federal endangered species list. For more on these farm and rural news items, please read on …

WASHINGTON, D.C. — March 20 was National Agriculture Day, an occasion that few of the 99 percent of Americans who don’t make their livings as farmers were aware of. However, the 45th observance of the occasion was observed by many within the farm and food industries as an opportunity to educate consumers on where their food and fiber comes from, and agriculture’s role in the economy. “Our farmers, ranchers, foresters and producers in America are feeding and clothing the world — and it’s important to never forget that,” noted U.S. Agriculture Secretary Sonny Perdue, who also released a video celebrating America’s agriculture community that can be viewed on the www.usda.gov website.

In addition, the USDA Farm Service Agency (FSA) celebrated by recognizing a variety of farmers and ranchers, including John and Pat Sondgeroth, fourth-generation farmers who raise beef in Mendota. The owners and operators of Heartland Meats have been selling their meat products at farmers markets in the Chicago area for 17 years. “Educating consumers is a challenge in the agriculture industry,” John Sondgeroth said. “We have to tell our story, what we do, why we do it and how. It’s a necessity.”

BLOOMINGTON — Illinois farmers are doing their part in planting pollinators such as milkweed on their lands in order to encourage habitat for the monarch butterfly, acknowledges Kay MacNeil, director of the Illinois Garden Club’s Milkweed for Monarchs program. But now the Illinois Farm Bureau and other farm groups are concerned that a move to list the monarch butterfly as endangered or threatened could “fundamentally change agriculture in the Midwest,” according to one IFB official.

According to the IFB, the U.S. Fish and Wildlife Service plans to decide whether to list the monarch by June 30, 2019. The listing is being considered after environmental advocates petitioned the U.S. Fish and Wildlife Service to declare the insect as endangered, assigning much of the blame to agriculture for the significant decline in monarch populations recorded during their annual breeding migration. The IFB, along with state farm bureau organizations in Oklahoma and California, supports placing a moratorium on placing any more species on the list under the Endangered Species Act.

At issue is how Fish and Wildlife defines a species’ critical habitat, said Lyndsey Ramsey, IFB associate director of natural and environmental resources. “In the case of the monarch, if critical habitat is defined very broadly to not only be where milkweed exists, but where milkweed could exist, then the impact would be widespread,” she said in an IFB news release.

CLARE — Northern Illinois farmer-blogger Trent Sanderson contributes insightful and educational articles to the Illinois Farm Families website (www.watchusgrow.org) and blog. His recent post describing how his family has grown both organic and conventional crops — and the benefits and drawbacks of both — was also shared on the Illinois Corn website. “It all comes down to what is best for each individual farmer and their land,” said Sanderson, who also enjoys learning and educating other farmers about the environmental benefits of cover crops. “I’m comfortable growing both and I feed both to my family. I’m making what I believe are the best choices and I encourage you to do the same.”

Raising organic and conventional crops employs some similar products, concepts and values, points out Sanderson, who is a young farmer with a wife and toddler son. For instance: contrary to what many assume, pesticides are approved for both types of farming. And as for soil health, both types of farmers use a variety of tools and practices to maintain soil and water health on farms of every shape and size.

His post serves as an adequate primer for beginning and other farmers considering organics.

PEORIA — Some 800 alpacas and their entourages converged from all over America to spend last weekend at the Peoria Civic Center (that’s a lot of warm sweaters). The occasion was the Alpaca Owners Association’s annual National Alpaca Show, which draws hundreds of alpaca enthusiasts and fiber artists to varying geographical locations. So why Peoria?

“We are thrilled to bring our national show to Peoria in 2018,” said Bud Synhorst, AOA executive director. “We visited several cities throughout the U.S. to choose a host site for our premiere industry event and the city of Peoria, as well as the Peoria Civic Center, quickly rose to the top by exceeding all of our expectations.”

The alpacas, raised by ranchers for their valuable fleece, hailed from over 160 farms, according to Synhorst. The animals were featured in a show ring competition with grand national champions crowned on March 25. Also featured was an alpaca “selfie” booth, alpaca costume contest, a trade show and farm displays offering the latest alpaca fashions and hand-crafted items.

Hundreds of curious locals and ranchers looking to diversify into the growing North American alpaca market attended the event to talk face to face with breeders from throughout the U.S. — including some from central Illinois — and meet hundreds of alpacas, Synhorst reported.