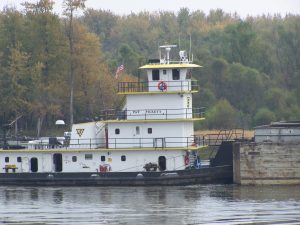 The Pat Pickett takes its payload south on the Illinois River toward Peoria on Oct. 27. Though a new water resources bill signed by President Trump last week will not authorize any lock and dam repairs on the river this year, its passage was greeted with enthusiasm by Illinois ag groups. (Tim Alexander photo)

This week’s roundup of news for Illinois farmers and rural dwellers includes reaction to the passage of a new water infrastructure bill that continues momentum in funding lock and dam repairs critical to farmers. Also this week: CRP payments are on the way to farmers in Illinois, and details have been announced for the WILL Farm Assets Conference in Normal on Nov. 20. Please read on …

Conservation payments on way to farmers

SPRINGFIELD — About $174 million in payments to farmers enrolled in the Conservation Reserve Program is ready for distribution, according to the Illinois Farm Service Agency. Payments will be sent to some 43,500 landowners in Illinois in compensation for their voluntary efforts to improve water quality, reduce soil erosion and improve wildlife habitat on private land, according to FSA executive director William Graff.

“Since its inception in the 1980s, CRP has built upon the voluntary participation of farmers and landowners to take sensitive land out of production and establish land cover to improve the environment,” Graff said in a prepared statement.

BLOOMINGTON — Seven years elapsed between passage of the 2007 and 2014 Water Resources Development Act, which typically authorizes new projects and repairs to the nation’s waterways infrastructure. However, with last week’s signing of the 2018 WRDA by President Donald Trump, Congress has now managed to work in a bipartisan manner to pass three consecutive, two-year water resources bills — just as the bill cycle was intended to operate.

Though this WRDA does not specifically authorize the U.S. Army Corps of Engineers to address lock and dam issues on the Illinois River, many in agriculture are praising the continuity of the bill’s passage and its “no-harm” content.

“Illinois corn farmers rely on an environmentally friendly and efficient river transportation system to get grain to an international marketplace,” said Aron Carlson, Illinois Corn Growers Association president, in an ICGA news release. “Thus, we are very happy to see that President Trump signed WRDA 2018 into law … allowing the Army Corps of Engineers to work on locks and dams on our rivers for the coming year. Though the bill does not directly impact the Illinois or the Mississippi rivers, it also does no harm to the industry via additional fees, tolls, taxes; for that, we celebrate.”

The University of Illinois Research Park employs more than 800 student interns that work in research and development for Illinois companies including ADM, Caterpillar, CME Group, Deere and Company, Dow AgroSciences and Syngenta, among others.

NORMAL — The Normal Marriott Hotel and Conference Center will again be the site of the WILLag.org Farm Assets Conference on Nov. 20. The day begins with the annual meeting of the Illinois Corn Growers Association at 8 a.m., followed by the official opening of the conference at 9:30.

“Naturally, we’ll take up the commodity markets, and the price of farmland,” said Todd Gleason, farm broadcaster for WILL and the University of Illinois Extension. “Bruce Sherrick will be on hand from the U of I TIAA Center for Farmland Research. He’ll be joined by colleagues Jonathan Coppess and Gary Schnitkey to round out a panel discussion of the farm economy.”

The panel will include Pete Manhart from Bates Commodities, Bill Mayer of Strategic Farm Marketing, Merrill Crowley from Midwest Market Solutions, Wayne Nelson of L and M Commodities and U of I farm economist Todd Hubbs. Another panel of experts will take up how large corporations are reaching all the way through the supply chain to the farmer and how this impacts premiums paid for commodities and production practices.

An update from the U of I Research Park, which is the home to many successful Illinois agricultural startups, will be offered after a noon luncheon. The conference cost is $40, which includes deck parking and the noon-hour meal. More info: 800-898-1065.

BLOOMINGTON — Three Illinois projects will be among 24 from across the nation selected to exhibit in the American Farm Bureau Federation County Activities of Excellence program. The chosen projects were from among more than 100 entries chosen for the Farm Bureau CAE Showcase at the 2019 AFBF annual convention and IDEAg trade show in New Orleans.

Past Illinois CAE winners include the Marshall-Putnam County Farm Bureau, with their “ImAgination Acres” attraction that is now a permanent fixture at the M-P County Fair in Henry.

Rohrscheib reappointed to USB board

FAIRMOUNT — A farmer from Fairmount and Illinois Soybean Association chairwoman, Lynn Rohrscheib, has been reappointed to serve a three-year term on the United Soybean Board. Rohrscheib was appointed along with 16 new members to the board by U.S. Agriculture Secretary Sonny Perdue. The board is composed of 73 soybean-producing members representing 29 states in eastern and western regions of the U.S., and is authorized by the Soybean Promotion, Research and Information Act. The members must be nominated by a qualified state soybean board in order to be considered for the honor. (USB/ISA news)