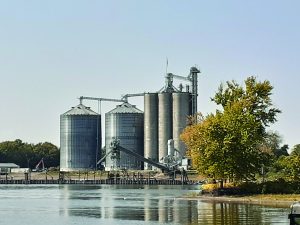 A grain facility on the Illinois River at Hennepin awaits barges in this October photo. The Illinois corn harvest stands at 95 percent complete and the soybean harvest at 96 percent, both ahead of schedule. (Photo by Tim Alexander)

Corn gained value last week when the USDA lowered its projected 2020 yield estimate for Illinois, but was harvest size again impacted by weather after the latest wind storms? We also have a summary of the new world supply and demand report for corn, soybeans and wheat, along with an announcement on new national conservation practice standards for agriculture. Please plow ahead for more farm and rural news …

SPRINGFIELD — Corn received a value boost with the release of the Nov. 10 USDA Illinois Crop Production report, which forecasts a 2020 yield of 195 bushels per acre in the Prairie State — down five bushels from October expectations. Planted area, at an estimated 11.4 million acres, is up 9 percent from waterlogged 2019’s acreage, while harvested area, forecast at 11.2 million acres, is up by 10 percent from last year. Production, at 2.18 billion bushels, would represent an 18 percent increase over 2019.

A cold front that pushed through Illinois producing 40-70 mph winds and storms on Nov. 10 did not appear to cause as much crop damage as was credited to the Aug. 10 derecho wind event that flattened crops across the Corn Belt. This is because unlike prior to the derecho of three months earlier, most farmers had already harvested their crops and put them in the bin. Favorable harvest weather can be credited, noted Ryan Frieders, an Illinois Farm Bureau crop watcher from DeKalb County.

“If it was earlier in the year, (the windstorm) would have been a very dramatic event,” Frieders said. “Normally there would be a lot of corn still in the field this time of year. But harvest went so fast, most people are done or wrapping up.” The corn harvest was 95 percent complete — six points ahead of average pace — and the soybean harvest 96 percent complete, or three points ahead of average, as of Nov. 8, according to USDA’s National Agricultural Statistics Service (NASS).

WASHINGTON, D.C. — As with Illinois and the U.S., the global outlook for corn and soybean production has been scaled back with the issuance of the Nov. 10 USDA World Agricultural Supply and Demand Estimates report. However, corn exports are expected to rise to record levels.

“The November USDA World Agricultural Supply and Demand Estimate report was expected to be a bullish report, but it exceeded all expectations,” commented Dana Mantini, senior marketing analyst for Progressive Farmer. “Yield and production on both corn and soybeans fell greater than expected — 2.6 bushels per acre (bpa) for corn and 1 bpa for soybeans. Ending stocks fell by 465 million bushels (mb) for corn and 100 mb for soybeans. Perhaps the biggest surprise was the 325 mb rise in U.S. corn exports, as Ukraine corn fell by 8 million metric tons (mmt) and China imports rose by 6 mmt. Another surprise was seeing no change in U.S. soybean exports, with USDA likely fearing an even greater demand-rationing rally ahead.”

In addition, the outlook for 2020-21 U.S. wheat is for stable supplies, higher domestic use, unchanged exports, and reduced ending stocks. Domestic use is raised primarily on higher food use, which has increased 5 million bushels to 965 million from 962 million for 2019-20. This increase is based mainly on the NASS Flour Milling Products report, which indicated higher food use for the early part of the marketing year than previously estimated.

The NRCS also announced two new conservation practices relating to wastewater management and wildlife habitat planning, noted NRCS acting chief Kevin Norton. “NRCS is committed to efficiently and effectively implementing the Farm Bill and delivering on our promise to America’s farmers, ranchers and forest landowners,” he said. “These practices are the building blocks of conservation, and they are science based and site specific. We took a hard look at our existing practices on the books, looking for opportunities to improve flexibility and integrate technology.”

URBANA — Add the University of Illinois’ Farm Economics Summit to the list of annual conferences and conventions going virtual due to the ongoing COVID-19 pandemic. This year, the IFES will consist of five, hour-long webinars to be broadcast from Dec. 1-15.

“IFES is specifically designed for farm operators, lenders, land owners and other agribusiness professionals. Due to COVID, this year the event will be virtual rather than in-person,” said Ryan Batts, U of I Extension program, in an email announcing the change.

Here is the webinar schedule:

Each webinar will begin at 11 a.m. CST. Registration is free at the conference website: