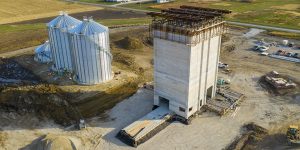 The new $20 million Feed Technology Center, under construction at the University of Illinois, received a financial gift from the Illinois Pork Producers Association. (Photo by James Boltz/College of ACES)

It’s official: the release of the 2019 USDA Illinois Crop Production Summary confirmed massive harvest losses for corn and soybeans, and we have the data. Did Illinois retain production its soybean production crown in a decidedly down year? You might be surprised. Also, this week Illinois Ag Director John Sullivan faced scrutiny over whether the state is doing enough to fund animal disease prevention. For these and more farm and rural newsbits, please read on…

SPRINGFIELD – Production losses during 2019 were reflected for all commodities in USDA-NASS’ Illinois Crop Production 2019 Summary, issued Jan. 10. Here are the lowlights:

BLOOMINGTON – Illinois’ 20 percent reduction in soybean production was still good enough to lead all states, according to 2019 USDA estimates.

“I won’t say it was easy because 2019 will be remembered as the most challenging growing season on record for many Illinois producers,” said Doug Schroeder, chairman of the Illinois Soybean Association (ISA) from Mahomet. “Yet, I think this report reflects the Illinois soybean industry’s resiliency and ability to produce a consistent, high quality product year after year, despite the weather and economic challenges of 2019.”

Exports continued to buoy Illinois soybean growers’ production, creating worldwide markets for our farmers’ products even as China and other key trade partners reduced their reliance on U.S.-grown commodities, noted ISA Marketing Committee chairwoman Roberta Simpson-Dolbeare. “One of ISA’s key priorities is to create marketplace preference for Illinois soy in export markets, biodiesel, animal agriculture and beyond. In 2020, you will see continued focus on nurturing existing markets and opening new ones. We hope to remain Illinois’ number-one ag export for years to come.” (ISA news)

BLOOMINGTON – A year after his appointment, Illinois Agriculture Director John Sullivan addressed challenges facing the state’s ag industry during the Illinois Farm Bureau’s yearly Agricultural Legislative Roundtable in Bloomington. Among the challenges: securing funding in a new state budget for agricultural priorities including a plan to fund animal disease prevention. This is exceptionally crucial to the state’s pork industry, which has mounted an extensive education campaign to help prevent the arrival of African swine fever in the U.S. and the state.

Acknowledging the Illinois Department of Agriculture’s animal health and welfare division has been underfunded, Sullivan answered that he has discussed funding work to prevent contagious disease outbreaks with State Veterinarian Mark Ernst and the governor’s office of management and budget.

“It’s all GRF (general revenue funding) money, and it’s a challenge to get those dollars,” Sullivan said during the Jan. 8 meeting. “I need you to talk to your legislators– your state representatives and senators. It can’t wait; you need to do it now.” (IFB news/Kay Shipman)

URBANA – In other Illinois Pork Producers Association news, the IPPA has announced a financial commitment to the University of Illinois’ new $20 million Feed Technology Center under construction south of the campus. The new center will strengthen relationships between the U of I College of Agricultural, Consumer and Environmental Sciences (ACES), industry and producers while fostering animal nutrition innovations with global impacts, according to Rodney Johnson, head of the Department of Animal Sciences at the College.

“Private gifts, such as this commitment from Illinois Pork, assist with sustaining and advancing the valuable discoveries, training and translation this facility will support. We welcome other stakeholders to join us in this investment,” Johnson stated, in a College of ACES news release.

Pam Janssen, IPPA president, noted that the investment will help ensure African swine fever and other animal diseases stay away from the Midwest. “With the threat of foreign animal disease transferring through feed ingredients, we welcome more research in that capacity,” the Minonk pig farmer said. (U of I College of ACES news)

During the 1950s and early 1960s, Illinois scientists pioneered the modern corn-soybean meal diet for swine and built one of the first indoor, slatted-floor swine production units in the U.S. (U of I College of ACES)