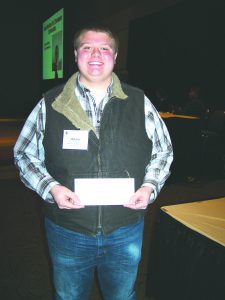 Adam Wright, of Carthage was a recipient of an IFCA Scholarship Grant at the Illinois Fertilizer and Chemical Association Annual Meeting in Peoria. He attends Western Illinois University studying Ag Science with a Double Minor in Precision Agriculture and Ag Business. (Photo by Tim Alexander)

BLOOMINGTON — Illinois Corn is bemoaning the weeks of progress to be lost on U.S. Congress’ ratification of the “new” trilateral NAFTA agreement, known as the U.S.-Mexico-Canada Agreement, due to the now-suspended partial federal government shutdown. This is founded on reports that the U.S. International Trade Commission’s investigation into the trade agreement will be delayed by 35 days, commensurate with the length of the shutdown, according to a post shared by Illinois Corn on Jan. 30.

The USITC is investigating the USMCA for its trade impacts before releasing the details to Congress for consideration. Originally due on March 15, the USITC report deadline will apparently be pushed back until April 19 or 20. According to the USITC, Federal Register notices will be posted for the USMCA and other investigations “in the coming days” that will provide more detailed information on scheduling. The notices will also be posted on the USITC website. This is unwelcome news, of course, for farmers who are desperate for new, expanded and reliable foreign markets for their products.

ST. LOUIS — Analysts, investors and farmers are awaiting the release of a major “catch-up” report from the USDA scheduled for Feb. 9 that will hopefully shed light on current crop supplies, values and futures. The first reports from the Heartland Field Office of the Illinois USDA National Agricultural Statistics Service to be issued after the end of the government shutdown, however, began trickling in on Jan. 31 with the Agricultural Prices Report.

The prices report reflected prices received for Illinois commodities in November 2018. The November Prices Received Index for agricultural production was at 88.1, an increase of 3.5 percent from October 2018, reported Illinois State Statistician Mark Schleusener. In addition, the Crop Production Index for Illinois increased by 5 percent, to 84.1. The Livestock Production Index, at 92.1, showed a 0.9 percent increase.

“Producers received higher prices for lettuce, market eggs, cattle, and broilers but lower prices for soybeans, milk, hogs, and lemons,” according to the report. This was evident in the Prices Received Index, which registered a 3.6 percent decline over November 2017. The Food Commodities Index, at 93.8, increased 5.6 percent from October of 2018 but showed a decrease of 6.9 percent from November 2017.

WASHINGTON, D.C. — In an alarming disclosure, the USDA Animal and Plant Health Inspection Service issued a news release on Feb. 1, alerting the public that 26 cases of virulent Newcastle disease were reported in California poultry facilities during the week of Jan. 25-31. An additional 84 cases were confirmed between Dec. 21, 2018 and Jan. 24, 2019. However, producers and the public were not properly notified of the latest reports until after the partial federal shutdown was settled, the agency admitted.

“These detections occurred during the recent government shutdown and, while there were APHIS employees responding to the detections during that time, the weekly update messages and updates to the APHIS website were not completed,” according to the APHIS news release. “These updates include two commercial cases in Riverside County, Calif., which were announced during the shutdown. They also include one case in backyard exhibition chickens in Utah County, Utah.”

Though no human cases of VND have ever occurred from eating affected poultry products, the omission shines a light of confirmation on many observers’ warnings that food and production animal safety were left at risk during the shutdown.

PEORIA — New Illinois Agriculture Director John Sullivan joined fellow Illinois farmer and former U.S. Ag Director John Block as guest speakers at the 2019 Illinois Fertilizer and Chemical Association Conference, held Jan. 28-30 at the Peoria Civic Center. Sullivan, a surprise guest at the IFCA Annual Meeting on Jan. 29, talked about working with new Gov. J.B. Pritzker. “He told me ‘John, I don’t know the first thing about farming, so please help me to understand some things,’” Sullivan said. “He has been very open and is interested in working with the farmers of Illinois on their priorities.”

Block, who still farms in Illinois, was the featured speaker at the $50-per-plate awards breakfast that morning. Also present were Illinois deputy agriculture director Warren Goesch, and IFCA chairman Regan Wear, who issued a report on IFCA’s 2018 accomplishments. Among the accomplishments: accommodating more than 3,000 spray operators in need of dicamba herbicide application training, in spite of the new dicamba labels being issued as late as Oct. 31.