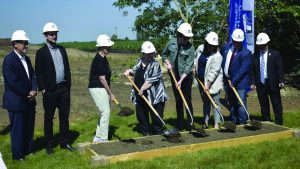 In this week’s farm and rural news roundup, we’ll talk about agricultural politics, finances and university research as farmers begin their 2022 harvest. Please plow ahead …

WASHINGTON, D.C. — During an Illinois Farm Bureau legislative mission to Washington last week, Union County specialty farmer Austin Flamm had an opportunity to talk with Sen. Dick Durbin, D-Ill., about rising input costs and farm labor costs that negatively impact his farm operations. Flamm told Durbin he routinely employs between 100 to 150 temporary laborers each harvest season, with around 70 percent of them working through the federal H2A program, which allows American producers to temporarily employ foreign workers for on-farm duties.

Flamm said that proposals to cap the number of available H2A visas would negatively impact farmers. He also told Durbin Congress should authorize an amnesty program that both halts the free-flow of immigrants into the country and provides opportunities for those who are already in the U.S.

Durbin later addressed Flamm’s policy suggestion in a Twitter post. “We agreed we need comprehensive immigration reform to fill farmworker positions (with) immigrants in search of new opportunities in the U.S.,” Durbin said. “I will continue to advocate for policies that advance the needs of the IL’s ag sector.” (IFB news service)

BLOOMINGTON — Thirteen Illinois agricultural conservation project proposals will be supported through the first round of funding for the United States Department of Agriculture’s climate-smart ag grants, which incentivize Illinois growers to implement climate-smart practices for row crop production, animal agriculture and forestry. In total, the USDA will invest around $2.8 billion in 70 projects across the U.S. in hopes to meet growing demand for American climate-smart commodities.

According to the Illinois Soybean Association, the majority of funding is intended to go directly to producers to encourage their participation. Enrollment in USDA’s climate-smart projects, which are supervised by private contractors and not through the USDA, does not require participation in a USDA conservation program. However, producers already receiving Natural Resources Conservation Service funding also will be able to participate in these pilots.

“In preparation for this funding announcement, the ISA checkoff funded projects including technical assistance and cost-share for conservation practice implementation, research for understanding cover-crop and no-till management, and the carbon, nitrogen, and phosphorus footprints of row crop production in Illinois,” said ISA Director of Agronomy, Abigail Peterson.

A complete list of projects identified for the first round of funding is available at usda.gov/climate-smart-commodities.  (ISA news)

URBANA — Measured in terms of liquidity, solvency, profitability, and financial efficiency, farm incomes in 2021 were much higher than the year before leading to stronger financial positions on Illinois farms. This is according to Brad Zwilling, of the Illinois Farm Business-Farm Management Association and Department of Agricultural and Consumer Economics at the University of Illinois, who issued his findings in a farmdocDAILY report on Sept. 16.

As for solvency, the average net worth of the 2,159 farms at the end of 2021 was $3.7 million, up from $3.3 million the year before. “Average farm and nonfarm incomes in 2021 were well above family living requirements, thus enabling net worth increases,” Zwilling found.

The average return on farm assets in 2021 for the farms was 7.8 percent, up from 4.3 percent a year earlier, reflecting greater profitability. “Hog farms recorded the highest returns, averaging 9.8 percent, while dairy farms recorded the lowest, averaging 1.1 percent. Return on farm equity in 2021 ranged from 13.2 percent for hog farms to 1.0 percent for dairy farms. The average was 9.3 percent, up from 4.5 percent in 2020,” Zwilling said.

In terms of financial efficiency, Zwilling reported that the interest-expense ratio averaged 1.9 percent for the 2,159 farms, ranging from 1.9 percent for grain farms to 5.4 percent for beef farms. The 1.9 percent was down from 2.9 percent in 2020. See the entire report at Financial Summary of Illinois Farms for 2021 – farmdoc daily.

BLOOMINGTON-NORMAL — The Illinois Soybean Association has announced they are a proud sponsor of the Heartland Community College Soils Lab, which is currently under construction. The Soils Lab is part of the college’s new $23.4 million modern ag complex designed to serve the educational and ag workforce needs of central Illinois.

When ground was broken for the laboratory earlier this year, Heartland President Keith Cornille called it a pivotal day in the school’s history as it develops an agriculture workforce to meet a growing demand. According to WGLT Public Radio, the 29,500-square-foot facility will include an ag lab with roll-up doors so it can stage farm equipment, animals and drones for instruction. It also will include a plant and soil lab, a precision ag lab and additional classroom space.

Heartland has close to 50 full-time agriculture students but hopes to have 200 students once the new complex opens in 2024 to help satisfy demand for agriculture jobs in McLean County and across the state, WGLT’s Eric Stock reported.

“Whether students go on to become sales agronomists or plant breeders, educating students about soil history, development, functions, and health is vital to keeping our Illinois soils protected,” said Illinois Soybean Association Director of Agronomy, Abigail Peterson, in an ISA news release. “There is an imminent need for more students to know the science behind soil management as we face increased soil loss, nutrient loss, and undergo changing climate patterns.

More than 636,700 visitors attended the Illinois State Fair this year, making it the highest attended fair since industry attendance calculations were put into effect. Weekend attendance during the fair saw an increase of nearly 95,000 people over 2021. (Illinois e-News release)