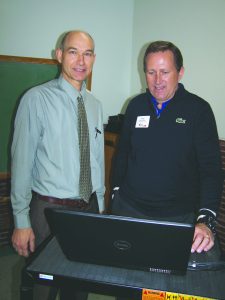 This week in your farm and rural news roundup: Illinois set a new yield record for corn and soybeans in 2018, but no one knew it until the delayed USDA production summaries were finally issued. We also have reports from the Illinois Pork Expo and a weather outlook seminar held last week at the Peoria County Farm Bureau, so please read on …

ST. LOUIS — The federal government finally issued its 2018 crop production summaries following the end of the partial shutdown (part one) on Feb. 8, showing a corn yield estimate of 210 bushels per acre, up nine bushels from 2017, and a corn production estimate of 2.28 billion bushels in 2018, up 4 percent from 2017. The USDA-National Agricultural Statistics Service yield estimate is a record high, and production is the third-largest on record. The national yield estimate for corn, at 176.4 bu./acre, was down 0.2 bushels from the record 2017 national yield. In Iowa, the corn yield estimate was 196 bu./acre, and Indiana farmers harvested an estimated 189 bu./acre.

A record soybean yield, at 65 bu./acre, was also recorded in Illinois in 2018. Soybean production, at 699 million bushels, also set a new state record. Soybean yield was up 7 percent from 2017, while production rose by 14 percent in Illinois, according to NASS.

PEORIA — Meteorologist Mike McClellan of the Mobile Weather Team was invited to the Peoria County Farm Bureau auditorium on Feb. 6 to present a planting season crop outlook to farm bureau members. During his 45-minute presentation, McClellan, of Washington, concluded that after an unstable remainder of winter and early spring, the Midwest should be in line for weather conducive to another highly productive growing season this summer.

More interesting were some of the follow-up questions from the audience, including an inquiry as to the legitimacy of global warming. Comparing today’s climate change awareness to the 1970s “new ice age” scare, the meteorologist opined that humans are not changing the world’s climate, but are certainly impacting “the weather.” Confused yet?

“Do I think that human activity is impacting the climate? Absolutely not. Absolutely not,” said McClellan. “Are we impacting the atmosphere with pollution and stuff? Absolutely yes. But we are not changing the climate, we are changing weather in micro-spots around the world.” He pointed to a “natural phenomenon” in Beijing, China that occurs when wind-whipped sand particles attach to pollutants in the air, creating a gritty type of smog, as an example of negative human influence on regional or local atmosphere.

“If you look on the map, (Beijing is) a little tiny area around the world,” he said, before going on to cite a recent television show claiming that the ecological disaster recovery that occurred following the Exxon Valdez oil spill has led to an actual improvement in marine life health and diversity in the region of the disaster. “The Earth has the unbelievable ability to not only improve itself, but to stay balanced. If that balance ever becomes unbalanced, then we are doomed. How that will happen I don’t know, but from a human perspective, we are just a grain of sand on a beach.”

The world likely stands a much greater risk of atmospheric disaster as a result of multiple volcano eruptions than from human pollution, McClellan added. He also compared clean air regulations influenced by global warming with misinformation promulgated under the guise of stricter proposed federal clean water regulations for farms.

SPRINGFIELD — Pam Janssen of Minonk was elected president of the Illinois Pork Producers Association during the Illinois Pork Expo, held Jan. 28-29 in Springfield. She has served the IPPA in the past in a host of leadership roles, including marketing and youth education. “My plan is to keep marketing our product both here and abroad,” Janssen said in an IPPA news release issued at the Expo. “Also, to continue bringing young leaders to our table to take our industry into the future.”

Janssen and her husband, Bob, are fifth-generation farmers residing on an 1874 centennial farm outside Minonk in Woodford County. She attends the First Baptist Church in Minonk and supplies sausage for the annual fire and rescue benefit breakfast in her community. “We must stand together as one to keep our industry viable,” she said. “As only the third woman to represent IPPA in this role, I have very big shoes to fill and I am ready to fill them.” Congrats Pam!

SPRINGFIELD — The families of Lehmann Bros. Farms of Strawn, operated by brothers Art and Ken Lehmann, were awarded the Illinois Pork Producers Association Family of the Year award at the recent Illinois Pork Expo in Springfield. The brothers’ families were recognized for leadership and pork promotion on the state and national levels, as well as for giving back to the agricultural industry and the community in which they live.

The Lehmanns market 120,000 hogs annually and work with 21 grower partners in eight counties in Illinois. They also farm 1,500 acres of corn and soybeans in Livingston County. They have opened their operation up to school groups, legislators and community members seeking education about modern pork production, while striving to adapt to changes and grow their business and remaining good stewards of the land. Lehmann Bros. Farms was recognized in 2007 as the Conservation Farm Family of the Year by Illinois Soil and Water Conservation Districts.

Both branches of the Lehmann family are dedicated to a lifelong journey of success in the pork industry as a close farming family, according to the IPPA. Congrats Lehmann family! (IPPA news)