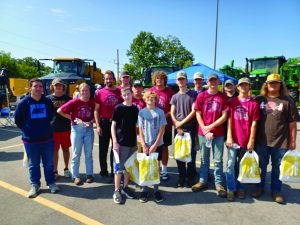 With combines rolling in southern and central Illinois, the 2022 harvest is finally upon us. Fittingly, it is also National Farm Safety Week. We have info on harvest expectations and more in this week’s news digest for Illinois farmers and rural dwellers. Please read on …

PEORIA — This columnist’s travels through Woodford, Tazewell, Peoria, Fulton and Knox counties last week confirmed that farmers were harvesting corn in many early planted crop fields. A quick yellowing and dry-down of crops in recent weeks hastened the central Illinois corn harvest, which many thought wouldn’t begin in earnest until late September or early October.

Illinois farmers planted 10.8 million acres each of corn and soybeans in 2022, according to recently updated USDA projections. Their estimate of harvested acres for corn (10.55 million) in Illinois is down 300,000 from last year, while harvested acres of beans (10.7 million) are up 190,000 from a year ago.

EAST PEORIA — Hundreds of high school students arrived via orange school buses at the East Peoria campus of Illinois Central College on Sept. 16 for an Agriculture, Diesel and Horticulture Career Showcase and Industry Immersion event. After a program orientation held in the college’s Performing Arts Center, the 450 kids in attendance were loosed outdoors to network with over 35 local employers and industry specialists and check out the latest in ag, construction and heavy truck equipment. The day also featured live demonstrations, food and gift bags for the students, most of whom belonged to their school’s FFA chapter, diesel mechanics program or agriculture-horticulture club.

“The day allowed students to see firsthand what a career in these fields could mean for them,” said Grant Grebner, ICC Ag and Industrial Tech professor. “They heard from successful alumni and current students in the programs and gained a better understanding of the potential of these career paths.”

ICC President Dr. Sheila Quirk-Bailey said the number of students attending the showcase doubled the 225 who were present for the same event pre-Covid. Agriculture professor Pete Fandel remarked that the high attendance signaled increased demand for employees in these fields, along with a gradual shift in attitudes regarding two-year technical degrees.

“I think a lot of students are not aware just how many jobs tie back to these industries. As for farming, there is also the input supply side, the marketing side, the merchandising, the financing, the computer side and the technology side, biotechnology … all those things tie back to ag and hort, and word is starting to get out about all of the fantastic career opportunities in these fields,” Fandel said.

ANKENY, Iowa — Last week’s tentative labor agreement between the National Carriers’ Conference Committee — representing the nation’s leading railroads — and the remaining unions representing railroad workers — the Brotherhood of Locomotive Engineers and Trainmen Division of the International Brotherhood of Teamsters, the International Association of Sheet Metal, Air, Rail, and Transportation Workers — Transportation Division, and the Brotherhood of Railroad Signalmen, sent a wave of relief through the agriculture and transportation sectors as harvest gears up across the nation.

Explaining the ramifications of the agreement was Mike Steenhoek, executive director of the Soy Transportation Coalition, of which the Illinois Soybean Association is a member. “Our nation’s railroads are integral to the success of the American farmer. Without cost-effective, reliable rail service, so much of what farmers produce will never connect with our domestic and international customers,” said Steenhoek. “American farmers are responding to the challenges of global food insecurity. We need our nation’s railroads to be a reliable partner in this effort.  A strike, lockout, or significant slowdown would have imposed significant harm on agriculture — particularly on the eve of harvest. The tentative agreement allows farmers and U.S. agriculture to proceed with doing what they do best — being the highest quality, most reliable provider of food to the world.”

The tentative agreement will provide rail employees with a 24 percent wage increase during the five-year period of the contract (2020-24).  An immediate average payout of $11,000 will be provided upon ratification, according to Steenhoek.

SPRINGFIELD — Heading into harvest season, the Illinois Departments of Agriculture and Labor are reminding all farm workers to stay safe. Gov. J.B. Pritzker has proclaimed the week of Sept. 18-24, 2022, National Farm Safety and Health Week in Illinois, with the theme, “Protecting Agriculture’s Future.”

The latest data from the U.S. Bureau of Labor Statistics shows the agriculture sector is one of the most dangerous in America. Each year the farming profession sees over 500 fatalities nationwide. “It is important to bring awareness not only to the physical dangers of farming, but the emotional toll it takes as well,” said Jerry Costello II, Director, IDOA. “While we highlight roadway safety, confined spaces safety, and other traditional farming hazards, it is also important to encourage farmers to take care of their own health.”

Each day during National Farm Safety and Health Week, the Illinois Department of Agriculture will highlight emerging issues and important topics on Facebook and Twitter. (Illinois e-News)

Each year since 1944, the third week of September has been recognized as National Farm Safety and Health Week. (Illinois Department of Agriculture)