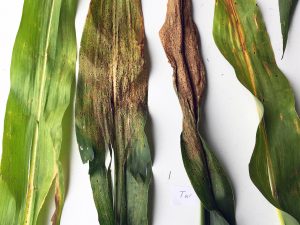 Northern Illinois and surrounding area corn growers are noticing an increase in tar spot this year. (Photo provided by Illinois College of ACES)

In this week’s roundup of farm and rural news: Applications for the government’s financial aid package for farmers affected by the current administration’s trade wars became available days ago, and details on the plan– which pays corn farmers a penny per bushel– are now coming out. In an effort to end the trade impasses with China, Mexico and other nations, farm bureau leaders including Illinois’ Rich Guebert, Jr. met with President Trump last week. What did they say? For these and more answers, please read on…

WASHINGTON, D.C. – Farmers who will apply for the first round of payments from the Trump administration’s trade-aid package at Farm Service Agency (FSA) offices can expect to receive $4.7 billion in Market Facilitation Program (MFP) payments for crops including soybeans, sorghum, wheat, cotton and corn, as well as dairy and pork products. This is according to the American Farm Bureau Federation (AFBF), which revealed that the top five states for payments– including Illinois– would receive around 45 percent of the total aid payments from round one.

“Combined, Illinois, Iowa, Minnesota, Indiana and Nebraska are estimated to receive more than $2.1 billion, or 45 percent, of the first round of MFP payments,” stated Victoria Nigh, AFBF economist. “The top ten states, which include some of the largest wheat-and-grain-sorghum-producing states, are expected to amount for 71 percent of all of the first round MFP payments.”

Payment rates for commodities are based on 50 percent of a farmer’s production for the commodity receiving aid, meaning farmers will need to prove actual production for the crops in 2018. This means that farmers needn’t be in any hurry to register for the aid package until after harvesting their crops. Farmers must have an adjusted income under $900,000 and be in conservation compliance to receive any aid payments, which will be capped at $125,000 per person. Dependent on the outcome of trade talks later his year, another round of payments may be scheduled, according to the administration. (AFBF, DTN, AgFax)

BLOOMINGTON – The Illinois Corn Growers Association (ICGA) has issued a two-sided fact sheet for farmers interested in the minutia of the president’s trade aid package known as the Market Facilitation Program (MFP). Tricia Braid, ICGA communications director, noted that farmers have until January 15, 2019, to apply for the program, which is paying one cent per bushel on corn planted for grain (corn intended for silage is not eligible).

The breakdown on payment rates determined by the USDA for other crops includes soybeans ($1.65 per bu.), wheat (14 cents per bu.), grain sorghum (86 cents/bu.), and cotton (6 cents per pound).

Guaranteed payments will be made on 50 percent of a farmer’s crop production prior to December, after which USDA will review payment rates and the status of trade relations before a determination is made on any future payments or rates. Options will include adjusting payment rates or extending the payments to 100 percent of harvested bushels or weight.

An important note Braid added: crop acreage that is disaster-affected will receive payment on only the bushels or pounds harvested, while disaster-affected acreage with no production is not eligible for payment.

For all of the details on the MFP, contact your area FSA office and visit the USDA website, www.farmers.gov. In addition, the AFBF has issued an analysis of the payment plan at www.fb.org. The Illinois Corn analysis can be found at www.ilcorn.org.

WASHINGTON, D.C. – State Farm Bureau presidents including Illinois’ Rich Guebert, Jr. met with President Trump in Washington September 5 to express their continuing concerns over trade and tariffs, and the unique financial difficulties heaped on farmers due to the administration’s decision to slap huge tariffs on imported goods earlier this year, and the fallout from the act. Guebert joined American Farm Bureau Federation (AFBF) vice president Scott VanderWal– who is also president of the South Dakota Farm Bureau– and Texas Farm Bureau president Russell Boening in telling Trump and U.S. Vice-President Mike Pence that they “needed open markets soon,” according to an AFBF news release.

Though Guebert nor the Illinois Farm Bureau did not return my email asking for an interview by press time this week, AFBF President Zippy Duvall issued the following statement after the meeting, which also included Agriculture Secretary Sonny Perdue and representatives of ag organizations covering row crops, dairy, livestock and specialty crops: “Farmers and ranchers are counting on the Administration to fight for strong trade deals that expand our markets– now more than ever as we face the worst farm economy in 12 years. This White House has been the most ag-focused in recent memory, and we are grateful to have a seat at the table with our nation’s leaders to discuss the importance of agriculture to our rural economies and the importance of trade to farmers and ranchers across the country.”

URBANA – Corn growers in northern Illinois and surrounding areas are noting a marked increase in tar spot, which is a relatively new corn leaf disease known in parts of Latin America as tar spot complex. Up to 30 percent infection rates have been recorded in some crop fields north of I-80, according to University of Illinois Department of Crop Sciences pathologist Nathan Kleczewski.

“Many people are wondering what we know and what they can do to manage the disease,” Kleczewski said in a U of I College of ACES news release. “The bottom line is that we do not really know, but we are working on it and need help from producers. This season we have seen this disease take off on northern Illinois, as well as southern Wisconsin, Michigan and parts of Indiana. Symptoms vary from the traditional black raised bumps, to bumps with necrotic fisheye lesions, to spots on leaves that lead to blight and drydown.”

Farmers with suspected tar spot should submit samples to the U of I Plant Disease Clinic. Visit www.web.extension.illinois.edu/plantclinic/.

“Tar spot” in corn was first identified in Illinois near DeKalb in 2015. (University of Illinois)