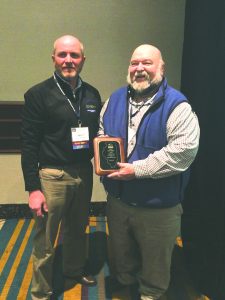 This week’s farm and rural news column focuses on the truth behind the president’s claim that Mexico will “indirectly” pay for his border fence through tariffs his administration has imposed on imports of Mexican steel and other products, according to a high-ranking member of his own party and a farm bureau trade expert. We also have some emerging details on the recommendations put in front of the new Illinois governor by his agriculture transition team, including the need for more spending on infrastructure and broadband access. Please read on …

PEORIA — On Feb. 15, President Donald J. Trump stood in the White House Rose Garden and announced that the U.S.-Mexico border wall he will build by circumventing Congress and declaring a national emergency will be “indirectly” paid for by Mexico through higher tariffs included in NAFTA 2.0, also known as the U.S.-Mexico-Canada agreement, on Mexican steel and other products, such as avocados. But there is an apparent flaw in his thinking that top members of his own party and trade experts had already warned him about: neither Mexico, Canada nor the U.S. will likely ratify the proposed trade agreement until the import tariffs that he says will pay for the wall are rescinded.

Illinois Farm Bureau director of legislative affairs Adam Nielsen echoed the recent comments of Senate Finance Chairman Chuck Grassley (R-Iowa) concerning the tariffs and USMCA ratification. Grassley, in his weekly press call, said that metals duties are the “biggest impediment” to passing the USMCA agreement. “It is very, very important that the White House get on board with doing away with these tariffs so we can get this thing not only before the Congress of the United States but before the Mexican Senate and before the Parliament, the House of Commons in Canada,” Grassley said.

Speaking to a group of farmers gathered at the Peoria County Farm Bureau earlier this month, Nielsen said “tariff-free trade is what the farm bureau promotes.” He warned that if Trump did not relax the tariffs on Canada and Mexico, USMCA would likely not gain passage. “We are happy that this treaty is ready to go and we will be full-throttle in support of it,” Nielsen told around 50 farmers, “but retaliatory tariffs are kicking our rear ends. Mexico is saying they will not ratify the final deal until our tariffs go away. We have been telling (the Trump administration) that those tariffs hanging over Mexico and Canada have to go. That is a quiet conversation that is taking place; the tariffs have to go or they will not ratify it. They are on the record, and we are too, saying please, please get rid of the tariffs.”

So, the question is if the proposed terms of the USMCA trade agreement — with U.S. import tariffs firmly in place — will “indirectly” pay for the border wall, according to the president, and Mexico is on record as saying they will not ratify the agreement with the tariffs in place, at whose expense will the border wall eventually be constructed?

BLOOMINGTON — Among the many recommendations made to Illinois Gov. J.B. Pritzker by his Growing Our Agricultural Economy transition team in their newly released report was to improve state infrastructure and rural broadband access. The 22-member, bipartisan committee said the action should be paid for through a state capital bill, which hasn’t been approved by the Illinois General Assembly in 10 years.

“The new administration should lead the effort to improve state infrastructure through a capital plan that takes into account the needs of state waterways, climate resiliency, and preventing the loss of farmland property value. The new administration could encourage the U.S. Army Corps of Engineers to upgrade lock and dam facilities on major waterways. The state should also improve farm-to-market infrastructure by upgrading rural roads and bridges that farmers rely on to move their products to market, and could work with rural drainage districts to improve field drainage and handle rural road flooding during harvest and planting periods,” the five-page report reads, in part.

“Additionally, the state should find ways to expand broadband to rural residents across Illinois, prioritizing farmers, schools and small businesses. The state should leverage existing broadband corridors and rural electric cooperative infrastructure and should consider ways to honor private property rights throughout the expansion process. The state could also convene a coalition of businesses, local governments, schools and hospitals to determine upload and download speeds and identify gaps in access across the state.”

These actions could, indeed, be paid for by a new capital bill, according to Pritzker’s appointee to the position of state agriculture director, John Sullivan. “Our (ag transition team) goal was, if the General Assembly works on a capital bill, broadband should be a part of it,” Sullivan, who co-chaired the ag transition team until Pritzker called on him to lead the Illinois Department of Agriculture, told the Illinois Farm Bureau news service.

SPRINGFIELD — A certified crop adviser from Ottawa was honored as the 2019 CCA Soybean Master Adviser during the ILSoyAdvisor Soybean Summit on Feb. 5 in Springfield. Kevin Nelson, a CCA with 24 years of experience, was honored for excellence in helping farmers improve soybean production.

“It is very humbling to be named the 2019 CCA Soybean Master Adviser. CCA certification has given me the opportunity to help growers find solutions and improve soybean productivity. Being able to help farmers make progress on their farms is why I do what I do,” said Nelson, a Joliet Junior College graduate who has completed more than 500 hours of continuing education credits. He works as an independent crop consultant at New Ag Center in Monee.

“His dedication to continuing education has helped him keep his approach to grower consulting fresh and up-to-date with current trends in research and production,” said Phyllis Coulter, field editor for Illinois Farmer Today. Producers can glean production advice from Nelson via articles posted on ILSoyAdvisor.com. His observations and advice as a “Cropwatcher” are often featured in Illinois Farmer Today. Congratulations Kevin! (Illinois Soybean Association news)