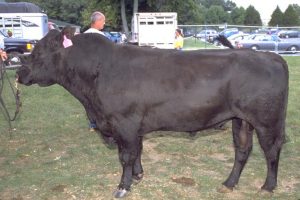 The 2018 Illinois Cattle Feeders Meeting, hosted by the University of Illinois Beef Extension, is set for Sauk Community College outside of Dixon from 9 a.m. to 2:30 p.m. on Friday, March 9. (USDA Photo by: Bill Tarpenning)

We have news and reaction pertaining to how President Trump’s proposed budget could affect the Illinois farm and rural community from a myriad of sources — and some of the reaction is not positive. Also this week, we have news and details of a major cattleman’s (and cattlewoman’s!) event coming soon to Springfield, courtesy Illinois Beef Association. Please read on …

PEORIA — Congresswoman Cheri Bustos (D-17th) is pulling no punches in her specific criticisms of the budget proposal put forth by President Donald Trump — a proposal which has been heralded by U.S. Agriculture Secretary Sonny Perdue as championing the causes of rural America. Not so, says Ms. Bustos, whose sweeping congressional district includes areas of Peoria County northeast through Moline. Among the damaging low-lights for rural Illinoisans: Trump’s proposal to kill 200 good-paying jobs by shuttering the USDA Peoria Ag Lab, defunding crop insurance that farmers depend on, and eliminating the programs that are funding the Barber-Colman Redevelopment in Rockford and the Q Multimodal Station in Moline. Also on Trump’s chopping block: cutting the infrastructure investments in TIGER grants rural communities rely on for capital project matching funds, according to Bustos.

“They often say that a budget is a statement of one’s values. As Midwesterners, we pride ourselves on values like hard work, community and lending a helping hand to our neighbors in their time of need. No matter what he says or what he tweets, President Trump’s budget proves that he sees us as nothing more than flyover country,” Bustos said in a Feb. 12 statement, which detailed seven major cuts Trump has proposed to rural economic development and agricultural programs, along with more than a dozen more cuts or program elimination in the areas of rebuilding communities (including eliminating the Economic Development Agency), protecting families (including elimination of the Low Income Home Energy Assistance Program, or LIHEAP program), supporting aging infrastructure (including a 22 percent reduction in funding for 2019 Army Corps lock and dam repairs), education (including eliminating subsidized student loans) and health care (including another run at eliminating the Affordable Health Care Act and slashing Medicaid).

National Farmers Union President Roger Johnson concurs with Bustos. “To say that this budget is disappointing is an understatement,” Johnson said. “This policy fails to step up for family farmers and ranchers, who are expected to endure yet another year of declining farm income. As the farm economy continues to falter, this is the time for the government to step in an boost rural America up, not yank the rug out from underneath them.”

PEORIA — At least Republican Rep. Darin LaHood, Bustos’ congressional district colleague from across the aisle, has the good political sense not to defend Trump’s budget in his hometown of Peoria. As he did last year when Trump first threatened to close the USDA’s National Center for Agricultural Utilization and Research, or NCAUR, as the Peoria Ag Lab is officially known, LaHood reacted quickly, issuing the following statement regarding Trump’s FY19 budget proposal:

“Peoria’s Ag Lab, and the researchers employed there, continue to serve a vital role in our local community and I am disappointed to see that the White House once again propose it to be cut. We must remember that the President’s budget proposal is just that — a proposal — and Congress holds the ultimate power of the purse. Similar to last year, it will remain a top priority for me to work in a bipartisan and bicameral way at the local, state and federal levels to maintain funding for the lab and ensure the facility remains an integral part of Peoria and the U.S. Department of Agriculture’s research efforts.”

BLOOMINGTON — While the Trump White House is proposing to eliminate funding for the TIGER grant program created by his predecessor, it is also seeking Congressional approval to move ahead with 25 percent of all new federal funds going to ‘rural infrastructure’ improvements at the local and state levels. Though critical of Trump’s overall FY19 budget proposal, National Farmers Union President Roger Johnson offered his early approval for Trump’s ambitious public-private transportation infrastructure initiative, which Ag Secretary Sonny Perdue says proves the President “has rural America close to his heart.”

After the administration delivered its “Legislative Outline for Rebuilding Infrastructure in America” on Feb. 12, the Illinois Soybean Association issued a reminder of its commitment to focusing on rural infrastructure improvements throughout the state. “We continue to be actively involved in discussions regarding infrastructure challenges in rural communities, and to help find solutions for them,” stated Lynn Rohrscheib, a soybean farmer and ISA chairwoman, in an ISA news release. “As a focus on infrastructure improvements begin to take place nationwide, we look forward to the positive impact this will have on Illinois soybean farmers.”

URBANA — The 2018 Illinois Cattle Feeders Meeting, hosted by the University of Illinois Beef Extension, is set for Sauk Community College outside of Dixon from 9 a.m. to 2:30 p.m. on Friday, March 9. “This meeting is a must-attend for Illinois cattle producers,” noted Travis Meteer of Extension. “First-hand access to this kind of knowledge in the cattle industry is rare.”

“Come join fellow cattlemen in Dixon to enjoy an opportunity to gain knowledge for today’s cattle industry,” said Meteer, who can be contacted about the meeting at wmeteer2@illinois.edu.