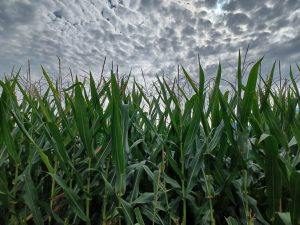 Despite a season of extreme weather challenges, Illinois farmers are preparing for a bountiful corn and soybean harvest, according to the USDA. (Photo by Tim Alexander)

This week, we have a report on Illinois’ expected corn and (record) soybean harvest, an update on the meteoric rise in Illinois farmland values, news about upgrades coming to rural bridges, and more. Please read on …

URBANA — Illinois farmland rose in value by $1,000 per acre, on average, for all classifications in 2022 when compared with average farmland value in 2021. This was the conclusion of the USDA National Agricultural Statistics Service, which estimated average farm real estate values by state in a survey of farmers from select geographical areas.

The largest yearly percentage increase for Illinois farmland occurred in 1977, when prices shot up by 37.3 percent from $1,062 per acre the year before to $1,458 per acre. Conversely, the largest yearly percentage decrease in Illinois farmland values occurred in 1985, when prices sank from $1,845 per acre during 1984 to $1,381 per acre, a decrease of 25.1 percent, according to the USDA Agricultural Land Values Bulletin.

BLOOMINGTON — When the Illinois Department of Transportation announced its Multi-Year Program, it endorsed a cost-sharing “bridge bundling” initiative that will serve to help repair crumbling rural bridges Illinois farmers rely on to move their goods to market. IDOT’s six-year bridge-bundling program, which was endorsed and promoted by the Illinois Soybean Association, could allow IDOT to deliver more bridge projects in less time, while saving money and leveraging increased revenues from the Infrastructure Investment and Jobs Act. A total of 14 statewide bundles will include nearly 60 structures programmed into IDOT’s MYP, according to the ISA.

“The ISA is encouraged to hear IDOT is starting to utilize bridge bundling across the state,” said Todd Main, Director of Market Development, ISA. “Making state funds available in addition (to) federal funding as part of the Federal Infrastructure Bill will help rural communities ‘Bundle Up Their Bridges’ and keep Illinois farmers moving as harvest approaches.”

Bridge bundling involves issuing a single contract for the replacement, rehabilitation, or repair of multiple bridges to reduce costs. A bridge bundling program can be implemented at the county and township level.

“One of the foundations of Illinois farmers’ transportation network is rural bridges which allows farmers access from the field to their destination point for delivery,” Main said. “The bridges of Illinois are showing signs of stress (due) to deferred maintenance and poor condition.” (ISA news)

BATH — Ten tons of invasive Asian carp — also known as silverfish — and a whole lot of cash for charity was netted during the Redneck Fishing Tournament, held Aug. 5 and 6 on the Illinois River at Bath, Illinois. Teams who paid to enter netted 3,367 invasive carp, weighing in at a total of roughly 20,000 pounds, with the top team grabbing 346 fish in just two hours.

The tournament, originally organized by Betty DeFord and now hosted by Nicki Gregerson, raised just over $6,700 that will go to veterans’ charities with the help of the local VFW chapter in Havana. In addition, DeFord, who is now battling breast cancer, raised nearly $900 for the Hult Center for Healthy Living in Peoria, which provides free cancer screenings and support programs for cancer patients.

DeFord began the event in the early 2000s as a way to fight back against the encroaching invasive carp population on the Illinois River. Following the daily competitions, the fish were trailered away to a processing plant — which didn’t exist when the event was created.

“I never imagined we’d still be doing this and having so much fun,” said DeFord, who, due to her efforts in battling the Illinois River silverfish infestation, was inducted into the Illinois Conservation Foundation’s Outdoor Hall of Fame, in a news release. “We’ve educated thousands of people about the very real dangers of these fish getting in your waterways, raised money to help veterans and had a blast doing it. Can’t wait for next year.”

SPRINGFIELD — Illinois soybean farmers will harvest a record number of bushels per acre in 2022, and corn growers will average more than 200 bushels per acre. This is according to the August USDA-NASS Illinois Crop Production report, issued last week.

In Illinois, 2,273 bridges are identified as structurally deficient and an additional 1,191 bridges have vehicle size and weight restrictions prohibitive to farm machinery. The estimated cost to repair and upgrade these bridges is $4.8 billion. (ISA/Todd Main)