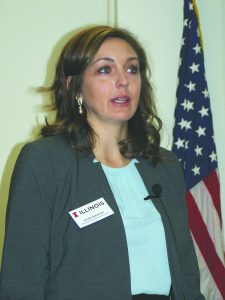 Krista Swanson, a researcher at the University of Illinois and farmer from Oneida, spoke about changes in the farm bill at the Peoria County Farm Bureau on Jan. 28. On Sunday, Swanson and her family were featured in a Super Bowl commercial seen around the world. (Photo by Tim Alexander)

In this week’s news roundup for Illinois farmers and rural dwellers, the state’s farmers are celebrating the U.S. passage of the USMCA trade agreement, which was signed by President Trump last week. They are also lamenting the lack of positive market response to the China “phase one” trade agreement — what are the factors keeping prices down? For updates and more news for Illinois farmers and rural dwellers, please read on …

BLOOMINGTON — Last week’s signing of the United States-Mexico-Canada trade agreement by President Donald Trump was bipartisanly heralded by Illinois legislators including Rep. Darin LaHood and Rep. Cheri Bustos. The agreement, not surprisingly, was also celebrated by a cross section of Illinois agriculture groups.

“This agreement is a great and vital victory that will set the stage for increased agricultural opportunity in 2020 and the years to come,” said Richard Guebert Jr., Illinois Farm Bureau president. “One in every five acres in Illinois is planted to feed Mexican and Canadian consumers. As farmers prepare for the 2020 planting season, hope is on the horizon for our Illinois farmers to sell what they grow.”

American Farm Bureau Federation President Zippy Duvall was optimistic but cautious in his statement: “There is definitely increased optimism on farms and ranches across America and we’re grateful for the advances, but we’re also realists eager to see results — especially for our dairy and wheat producers. We know it will take time for the new deals to go into effect and translate into increased sales. We’re eager to get back into full swing supplying safe, high-quality food and agricultural products around the world.”

While Mexico and the U.S. have approved the USMCA agreement, Canada’s House of Commons has yet to ratify the pact. If Canada approves the NAFTA replacement, terms will take effect 90 days later.

URBANA — Soybean futures prices fell once again last week due to the prospect of a “huge” Brazilian harvest entering the market and the expanding effects of the coronavirus outbreak on the Chinese economy. This is according to University of Illinois agricultural economist Todd Hubbs, who noted that the virus appears to have impacted China’s economic growth.

“A double hit associated with increased production from the United States’ main competitor and a potential drop in Chinese demand appears set to drive prices lower in the near term,” Hubbs stated, in an ACES News article published Jan. 27. “If present consumption trends stay in place this marketing year, the prospect of ending stocks dropping substantially below the current projection of 475 million bushels seems remote.”

Hubbs added that skepticism over China’s ability to honor the terms of the announced “phase one” trade restoration agreement with the U.S. is exacerbated by any perceived reduction in Chinese economic growth. (U of I ACES news)

SPRINGFIELD — Farmers and landowners will be glad to know that Illinois Governor J.B. Pritzker used his “state of the state” address last week to call for property tax reform. “Property taxes in Illinois are simply too high,” said Pritzker in his Jan. 29 speech. “That’s why it’s time to put the best ideas to work from both sides of the aisle. Local governments continue to max out their levies even when they don’t need to. There are perverse incentives in state law that encourage that. We can change the law to support local governments and lower property taxes. And with nearly 7,000 units of government in Illinois, it’s time to empower local taxpayers to consolidate or eliminate them. These changes, along with our landmark pension reform that consolidated police and firefighter pensions, can make a serious dent in property taxes.”

Pritzker also praised the growth Illinois has seen over the past year, especially in business tech startups. “Jobs and businesses are coming to this state because we are investing in the things that have always made us great: a skilled workforce, modern infrastructure, great public schools, top research universities, a robust agricultural sector, and a culture of innovation and entrepreneurship literally built into the steel frames of our skyscrapers — themselves a symbol of Illinois’ ambition and belief in the future,” said Pritzker.

State Senator David Koehler, D-Peoria, was encouraged by Pritzker’s speech. “By passing meaningful property tax reform, creating jobs by implementing the $45 billion infrastructure plan and assisting small businesses ahead of future minimum wage increases we will provide fiscal stability for our communities. I look forward to working with Governor Pritzker as we continue our fight to increase economic security for downstate families,” he said.

ONEIDA — Just a few days after speaking to farmers at the Peoria County Farm Bureau about crop safety net options for 2020 in her role as a University of Illinois researcher and farm bill analyst, Krista Swanson and her husband, Brett, were featured on a 30-second Super Bowl television advertisement. The Knox County farmers, who recently received the Illinois Farm Bureau Excellence in Ag award, represented Illinois Corn in an “Illinois Runs on Homegrown Corn” spot that highlighted products made from corn — including bioplastics, food packaging, clothing, medicine and ethanol.
“(The ad) is a direct reaction to the negative corn syrup ads that we saw on the big game last year,” Krista Swanson told the Illinois Farm Bureau’s RFD Radio. “Among one of the requested responses from our corn farmers was that we bring forward a really highly visible, public campaign about how awesome it is to be a corn farmer and some of the amazing things they’re doing with their time and money.”

The three partner nations in the USMCA trade agreement — the U.S., Canada and Mexico, enjoy a trade relationship valued at around $1.1 trillion annually.