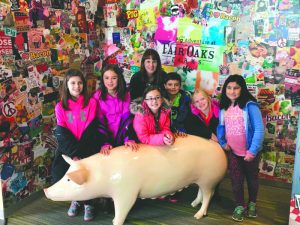 A happy new year to all of my readers! Wishing the news was better, but the new year has so far been dominated by news of the partial government shutdown. Guess which business sector is again paying the price: you guessed it, agriculture! We have a report on how the shutdown is affecting the farm and rural world, along with news of early cropping seminars and a look back at 2018 from the Illinois Pork Producers Association. Please read on …

URBANA — At press time for this issue, there was no end in sight for the partial government shutdown affecting upwards of a million federal workers, including many in the U.S. Department of Agriculture and Environmental Protection Agency. The shutdown is delaying the issuance of several USDA reports, including the export sales report, the world market price estimate, U.S. crop production report and the monthly World Agricultural Supply and Demand report, which is scheduled for a Jan. 11 release.

“Even as trade begins to wake up after an uneventful new year, much of the public information remains unavailable due to the shutdown of the U.S. government,” reported Dwight Roberts of AgFax. The shutdown of public information came at a time when trade activity seems to be keeping pace with reasonable levels achieved before Christmas, but no one can say for sure.

“A lot of the traders and people who rely on this information are wondering if we’ll get a big batch of good news all of a sudden,” said Jerry Gulke, president of the Gulke Group, on AgWeb.com. “Now you have the government looking at week’s worth of data. I think that unknown out there has a lot of people spooked. Could we get along without the USDA reports? Fundamentalists are certainly flying by the seat of their pants leaving analysis depending more on the technical aspects (price movements).”

BLOOMINGTON — Pesticide registrations will be affected by the shutdown of the U.S. EPA, according to the Illinois Corn Growers Association. Though the House of Representatives passed a bill on Jan. 3 that would fund the EPA through September and extend the Pesticide Registration Improvement Renewal Act through March 2019, Senate Majority Leader Mitch McConnell has pledged to not bring the bill to the Senate floor because it does not fully fund President Trump’s demand for $5.7 billion for a U.S. border wall or fence.

“Due to the government shutdown, any submissions to EPA after Dec. 28, 2018 will not be considered received or processed until after a change in EPA’s operational status for work to resume,” reads a notice on the EPA website. “Please note that the Pesticide Registration Improvement Renewal Act expired on Dec. 21, 2018. Per phased-out provisions described in FIFRA sec. 33(m)(2)(B), registration service fees for new applications received after that date will be reduced by 70 percent from fiscal year 2017 levels. In addition, such applications will not be subject to the decision review time frames specified in PRIA 3. Pending a change in EPA’s operational status, applications received after Dec. 21, 2018 will be subject to these new provisions, and applications received on or prior to December 21, 2018 will continue to be reviewed under the decision time frames specified in PRIA 3.”

In addition, the EPA’s online pesticide submission portal is “essentially shut down and not being manned,” according to the ICGA.

SPRINGFIELD — If you still need more information before committing to cover-cropping, the IDOA, USDA Natural Resources Conservation Service, Illinois Soil and Water Districts and others are sponsoring three conservation cropping seminars later this month. “The three meetings throughout the state will help provide more information on such practices as cover crops, nutrient management, and soil health, which help address resource concerns outlined in the state’s Nutrient Loss Reduction Strategy,” according to Elliot Lagacy of the IDOA.

Keynoting the meetings will be David Montgomery, author of “A Growing Revolution — Bringing Our Soil Back To Life,” and soil health “rock star” Ray Archuleta, who is a retired NRCS agronomist and spokesman for the USDA-NRCS “Unlock the Secrets of the Soil” campaign. Meetings will be held Jan. 22 at the Mendota Civic Center in Mendota, Jan. 23 at the Crowne Plaza in Springfield, and Jan. 24 at the Regency Hotel in O’Fallon. For more information or to register, visit the Champaign County Soil and Water Conservation District website (www.ccswcd.com).

SPRINGFIELD — On Jan. 2, the Illinois Pork Producers Association issued a “top nine” review of highlights achieved during the previous year. The achievements included further expansion of the livestock and pork industry in Illinois, with 55 new notices to construct or expand pig facilities filed with the IDOA during 2018. IPPA also graduated its inaugural class of Future Illinois Pork Leaders, with nine young leaders meeting in Springfield, Monmouth and Chicago to learn the ins and outs of the pork industry. In addition, IPPA, in conjunction with the Illinois Livestock Development Board, held several open houses celebrating many of the new barns and the families that built them.

Working with the U of I Extension and Illinois Farm Bureau, IPPA sent over 100 farmers to manure hauler workshops in the state. IPPA also debuted their Pork Anthem video on social media, launched a “pig farmer-approved” restaurant promotion campaign, and celebrated the 10th anniversary of its Pork Power program. Also in 2018, IPPA served bacon-lettuce-tomato sandwiches to legislators during “BLT Day” in Springfield, and continued its youth outreach programs with several activities and field trips conducted throughout the year. (IPPA news)