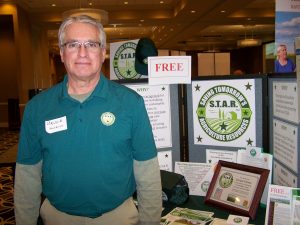 Bruce Henrikson, special projects coordinator for the Champaign County SWCD, was in East Peoria Feb. 19 promoting the Saving Tomorrow’s Agricultural Resources program, which serves to promote farmers’ soil and water conservation efforts. Around 30 Illinois counties have signed on to the program for 2019. (Tim Alexander photo)

In this week’s column, we have a couple of reports from the ILSoyAdvisor Better Beans seminar, farm bureau reaction to the EPA’s proposed new Clean Water rule, details of an upcoming farmland rental survey and more news and views for Illinois farmers and rural dwellers. Please read on …

PEORIA — Farmers are pretty much unanimous in their belief that clean waters and a conservation-based approach are basic, primary goals of their operation. Now that the U.S. EPA and Army Corps of Engineers are recommending more stringent — some say unrealistic — standards for the amount of nitrates and phosphorus allowable in streams and other bodies of water on farms, the American Farm Bureau Federation is asking the government for “clear” clean water rules.

“Farmers and ranchers continue to work hard every day to preserve the world around us,” said AFBF president Zippy Duvall in a Feb. 15 news release. “We are proud of the progress farmers and ranchers have made in their fields and ranges, and we look forward to making even more progress with fair, clear and reasonable rules.” The AFBF is still digging into the proposed new rule, which is now in a 60-day comment period that closes on April 15.

The proposed rule was a hot topic during the recent Illinois Fertilizer and Chemical Association annual meeting, conference and trade show in Peoria. During her annual address to membership, IFCA president Jean Payne said turning back the proposal — which she said would limit the presence of phosphorous in waterways to one-tenth of a part per million (ppm) and nitrogen to 3.9 ppm — would be a top priority for IFCA in 2019. Both the AFBF and IFCA are urging producers to weigh in on the proposed EPA Clean Water Rule; comments may be submitted through AFBF Advocacy’s “Clean Water Clear Rules” action alert.

EAST PEORIA — In an effort to encourage more farmers to meet the goals of the Illinois Nutrient Loss Reduction Strategy, the Champaign County Soil and Water Conservation District began a voluntary, confidential program in 2017 to assist farm operators and landowners in evaluating their nutrient and soil loss management practices on individual fields. That year, 78 Champaign County farmers managing 104 crop fields participated, leading to the program being offered statewide. In 2018, 19 county SWCDs participated in the Saving Tomorrow’s Agricultural Resources evaluation program originated by the CCSWCD.

“Two of the farmers on the CCSWCD board who were already doing a lot of the things to reduce nutrient losses and improve soil health were becoming a little frustrated that not many of their neighbors had been making any changes,” said Bruce Henrikson, special projects coordinator for the CCSWCD. “It is all based on farm practices, and it all begins with a three-minute, confidential survey of farmers’ practices on each field. Their efforts are rated on a star rating of one to five. We charge the farmer nothing, and they get a field sign to promote their star rating. We put together a summary of our results so that we have a view of what the farmers have done. Many in the food supply chain are interested in purchasing products from farmers who can document their soil and water health efforts.”

Henrikson was manning a booth promoting the STAR program at the ILSoyAdvisor “Better Beans” seminar Feb. 19 in East Peoria, hoping to encourage farmers from Tazewell and Peoria counties — which are currently not participating in the STAR program — to rally support for the program with their local SWCDs. “We have 29 counties that will be participating this year, and representatives from two more have made contact with me today,” he said. For more information on the STAR program, call Henrikson at 217-352-3536, ext. 3.

There has been a 20 bushel per acre rise in yield trends for corn in Illinois from 2013-2018. (University of Illinois/Gary Schnitkey)

EAST PEORIA — Also attending the ILSoyAdvisor Better Beans series in East Peoria was Illinois state conservationist Ivan Dozier of the USDA-Natural Resources Conservation Service, who told farmers that contrary to rumors, there is funding allocated for soil and water conservation programs in the 2018 Farm Bill. “CSP and EQIP are funded in the new farm bill, and so is the Conservation Reserve Program. And if you are already doing something, the CSP is the likely program for you. You have to show that you are already employing some conservation practices to enroll in it. Then you agree to do a few more things for a period of five years,” he said.

“EQIP has always been a fix-it program, in that there has to be an erosion problem or a water quality problem that needs fixed. You are rewarded for fixing the problem. The good news is that these programs are still included in the 2018 Farm Bill, and that we will be looking at ways to streamline both programs while we are in the process of making changes to the rules of the programs, making them easier to use and easier to sign up for.”

SPRINGFIELD — Speaking at the Better Beans seminar Feb. 19 in East Peoria, University of Illinois agricultural economist Gary Schnitkey advised farmers to attempt to renegotiate rental rates for farmland with landlords as farm profits continue to shrink. In order to better gauge what farmers are paying for land leases, the USDA National Agricultural Statistics Service will be contacting more than 8,000 Illinois farmers and ranchers to gather land rental rate information for their annual Cash Rents and Leases survey.

“This brief survey is our only source of county cash rental rates,” said Illinois state statistician Mark Schleusener. “By responding, producers help the farming community and ensure USDA bases its decisions on the most accurate data.” Illinois NASS will begin by mailing surveys to producers in February, followed by calls and visits in April. For more info, call Illinois NASS at 800-551-1014. (USDA-NASS news release)