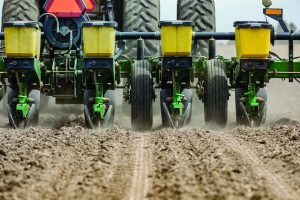 The prolonged wet and cold spring has left planting progress far behind the normal pace across most of Illinois.

Illinois’ top farm news stories include the wet spring continuing to force farmers to keep their planters in their sheds, and a look at the corn checkoff rate increase approved last week by Illinois growers. We’ve also got an interesting look back at the origins of Earth Day. Please read on …

SPRINGFIELD — Notice that you haven’t been seeing the usual number of tractors and planters entering and exiting crop fields this spring? That’s due to a prolonged wet and cold spring, which has left planting progress far behind the normal pace across most of Illinois. Just how far behind can be gauged by the total lack of planting progress updates for both corn and soybeans in the April 18 Illinois Crop Progress and Condition report issued by USDA-NASS. In two decades of agricultural news reporting, I don’t think I’ve ever not seen a planting progress report issued this late into the year.

“We’ve had many of our best yields from planting dates in early to mid-April, but the window did not present itself,” reported AJ Woodyard, an Edgar County farmer. “Our fall field work has us prepped to move quickly once it does dry out, and we know from experience that we don’t lose much yield potential in the latter half of April, so there’s still time to maximize most of our opportunity.  Once the calendar turns into May, our yield potential decreases more substantially by the day and we’ll consider strategies we can implement to try and mitigate against some of that potential loss, if that scenario presents itself.”

SPRINGFIELD — Illinois corn farmers widely approved a referendum that increases the state’s corn checkoff rate, or the percentage on a sale of seed that is deposited into an organizational fund to promote and broaden sales for Illinois-raised corn products. Corn growers approved the referendum by an 88 percent-to-12 percent margin. It will result in the current five-eighths cent corn checkoff rate increasing to seven-eighths of a cent per bushel. The program will retain the right to refund and the new rate will take effect Oct. 1.

“We understand that it is important that we continue to invest these checkoff dollars with integrity to achieve the goals and meet the needs of corn farmers in Illinois,” said Mark Wilson, chairman of the Illinois Corn Marketing Board (ICMB), which oversees the state corn checkoff program. In a news release, ICMB summarized what the additional funding could be used for:

URBANA — Did you know that Earth Day and the Environmental Protection Agency’s early 1970s origins spring from an oil slick and a burning river? For Earth Day 2022, University of Illinois agricultural economist Jonathan Coppess recalled the 52-year-old history of Earth Day and the flurry of environmental legislative actions that followed its creation. He also lamented the current inability of today’s Congress to pass meaningful climate change mitigation measures.

“These are interesting times to reflect upon this annual event amid a steady stream of scientific warnings about the danger we pose to ourselves, maybe even a ‘ghastly future’ due to climate change,” Coppess mused in his article, “Commemorating Earth Day with a Little Legislative History” (farmdoc daily (12):55, Department of Agricultural and Consumer Economics, University of Illinois at Urbana-Champaign, April 22, 2022.)

“It was the political and public impact of two events in 1969 that have received much of the credit for catalyzing the modern environmental movement. On Jan. 28, 1969, an oil rig off the coast of Santa Barbara, California exploded and released thousands of gallons of oil for a month. The explosion was powerful enough to crack open the sea floor in multiple places and was largely the fault of inadequate safety measures by the corporation operating the rig. Not six months later, sparks from a train ignited an oil slick and driftwood on the heavily polluted Cuyahoga river in Cleveland, Ohio. The sparks ignited a fire on the river that engulfed two railroad trestles and became legend.”

“Such a rare collection of achievements ‘in the circumstances of politics’ and disagreement that is the difficult deliberative process built in the U.S. Constitution can seem more distant in time than a mere 52 years,” Coppess concluded. “The past is a troubling statement on the current state of our politics and the legislative process when such achievements are unthinkable, and the previous era appears anomalous. It becomes far worse in the face of the climate change crisis that demands an ability to achieve far-reaching responses.”