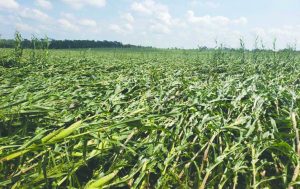 The Aug. 10 derecho windstorm pushed millions of acres of ripening corn to the ground. (Iowa Department of Agriculture and Land Stewardship photo)

The Aug. 10 derecho damaged 10 million acres of crops in Iowa alone, while wind-damaged acreage in Illinois was still being assessed at press time. Meanwhile, crop insurance claims are pouring in from northern Illinois. How this damage will affect harvest numbers and prices remains to be seen. We also have an update on Illinois farmland values from the University of Illinois. For more, please read on …

BLOOMINGTON — A new term was introduced into the lexicon of Midwest farmers who thought they’d heard them all during the crazy year of 2020 — the derecho. On Aug. 10, a huge wind storm — later termed a derecho — originated near Omaha and developed into a hurricane-force, 112 mph straight-line gale before reaching Cedar Rapids, Iowa, which took the brunt of the storm. After crossing into Illinois, the derecho’s winds were measured anywhere from 60 mph near Peoria to around 100 mph in northeast counties.

Initially, more than 1 million people were without power as the storm, which also included tornadoes, hail and powerful rainstorms, sustained itself for some 700 miles. In Iowa, over 10 million acres of crops were damaged or destroyed, according to National Water and Climate Center satellite imagery.

In Illinois, COUNTRY Financial reported 150 crop insurance claims had reached their office by Aug. 13. “The highest winds were in Iowa; that’s where we got a little lucky in Illinois,” Brad Clow, crop operations manager for COUNTRY, told the Illinois Farm Bureau news service. “We had some counties in the northeast area that had high winds that took some corn down. We had some green snap and some corn was bent. We think some of it will recover.”
Farmers in Indiana also reported crop damage attributed to the derecho, though not to the extent of the devastation in Iowa.

Will the derecho lift corn prices?

DES MOINES, Iowa — The Aug. 10 derecho windstorm may have pushed millions of acres of ripening corn to the ground, but could that same storm also help raise corn prices for farmers? That is the question many are asking after the USDA estimated that 10 million acres of corn could be damaged or destroyed in Iowa alone. The Iowa Corn Growers Association opted not to estimate how much of the corn crop was lost until more was known about the true extent of the damage.

Before the derecho, the USDA had predicted a record U.S. corn harvest of 15.3 bushels over 84 million acres. Iowa’s harvest would have provided an estimated 18 percent of the production. In addition to the loss of live crops, Iowa’s secretary of agriculture reported “tens of millions” of bushels of grain stored at farms and elevators were also damaged and destroyed.

“It’s a problem of two years of crops here,” Iowa State University agricultural economist Chad Hart told the Associated Press. “You’re still dealing with what you grew last fall and you’re trying to figure out how to prepare for what you’re growing this fall.”

As of Aug. 16, CBOT December future prices for corn had fallen 5 cents to $3.38 from the previous day’s price, showing that the markets, initially, were largely unmoved by the derecho’s effect on the crops.

SPRINGFIELD — It will be interesting to note if the derecho will move the needle on Illinois’ expected corn yield. On the day the derecho swept across the Midwest, Aug. 10, USDA-NASS issued its weekly Illinois Crop Progress and Condition report. Here are the corn and soybean highlights, pre-derecho:

With independent crop tours kicking off all around the Midwest, it will also be interesting to hear what non-USDA field scouts have to say about the extent of damage to the region’s corn crop, along with how much they expect to harvest.

SPRINGFIELD — After two years of holding steady, Illinois farm real estate values have risen by 1.6 percent. This is according to the August USDA land values report for farm real estate, which shows Illinois average value per acre at $7,400, up from $7,280 in 2019 and 2018.

“But farmers have other management issues they’re dealing with these days and our online sessions can help with that, too,” said Jungmann. “From crop protection to mental health, from soil health to farm safety, we’re putting together a targeted list of sessions.”

Breakout sessions for the three-day show will focus on operation-specific topics that attendees can choose from to best fit their needs. “The beauty of a virtual experience is that they can return later to catch a breakout they may have missed when it first appeared,” said Don Tourte, Farm Progress VP of sales.

The Farm Progress Virtual Experience runs Sept. 15-17 and is free online at FPVexp.com. To register for the event, visit FarmProgressShow.com. (Farm Progress news)

Paul Jeschke, a Mazon farmer and director for the Illinois Corn Marketing Board, lost three grain storage bins, or half of his capacity, due to the derecho. (Ill. Farm Bureau news)