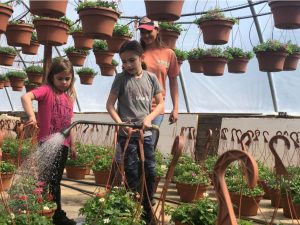 Anya Irons has been digging in the dirt since she was a girl.

First, in a small garden plot at the Russian orphanage where she lived until she was 15.

During a 10-day sponsored stay with the Ioerger family at their Minonk farm in 2003, the 15-year-old’s eyes lit up upon seeing their spanning farmland and small garden, where she spent part of her trip working in the soil and lending a hand wherever she could.

“I had a dictionary with me but I couldn’t tell them how much I appreciated them,” said Irons, who spoke only Russian at the time. “I just drew pictures for them those 10 days.”

Lowell and Janet Ioerger (pronounced yay-ger) adopted Irons two months after that trip, and today, the 34-year-old has grown a 1-acre garden to 15 acres of flower and produce gardens and nine greenhouses at the centennial farm.

“I was the happiest kid in the world,” she remembers, adding in Russia, children cannot be adopted after they turn 16.

The Ioergers have two sons — Zach and Jacob — around Irons’ age, and the couple also wanted a daughter.

“It took me a while to call them mom and dad — I never had parents,” Irons said. “It took a while to get used to it, and there were a few kids who came back to the orphanage (after being adopted), and they were heartbroken. But my parents said, ‘You’re not going anywhere.’ 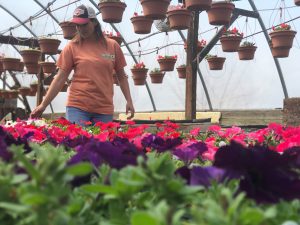 Anya Irons of Minonk walks through one of her nine greenhouses at Ioerger Family Farms. Raised in a Russian orphanage until she was 15, Irons was adopted by the Ioerger family in 2003 and since then she has grown the family’s flower and produce operation to 15 acres. (Photo by Tammie Sloup of FarmWeek)

As the years go on, Irons’ memories of the orphanage fade and are replaced with technicolor memories of building a successful flower and produce operation. Today, Irons, her parents, and her two young daughters partner with 40 regional florists and sell their fruit, vegetables and flower arrangements at farmers markets and the farm’s retail store — Triple I Garden Shop.

As the busy selling season starts soon, the greenhouses, many of which were converted from hog buildings, are filled with 4,000 potted plants and flowers of all sizes and different arrangements.

Walking through one greenhouse, Irons, with her daughters, Lyla, 9, and Ali, 6, in tow, points out how each pot has a different “recipe” and blend of colors. She holds up one pot, noting she named the arrangement “Candyland,” and touches a hanging planter, explaining that one is called “Grandma’s Choice” because the flowers bear her mother’s favorite colors.

Aside from the potted plants, veggies and herbs are starting to grow in the 20,000 square feet of greenhouses, almost ready to be planted in the nearby garden plots.

Although the arrangements are a family project, Lowell Ioerger said Irons is the real artist as she has a special knack and creativeness, earning customers from as far away as Nebraska.

(WATCH the family on their farm in Minonk)

Their work gears up in early March, with the family arranging hundreds of planters a day. By the first week in May, the family will start selling and traveling to regional farmers markets — one of Lyla and Ali’s favorite activities.

“The girls love going to the garden to pull carrots or pick other vegetables to get ready for the farmers markets,” Irons said. “They beg me to go to the markets.” 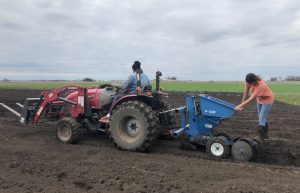 Anya Irons and her father, Lowell Ioerger, plant potatoes and onions at their family farm in Minonk. (Photo by Tammie Sloup of Farm Week)

Irons met her husband, Richie, while attending Illinois Central College, and the two live down the road from her parents. She begins to choke up as she talks about her relationship with her daughters and how different her childhood was in an orphanage with 150 other children. She dubbed her girls farmers at heart.

Since about 2005, the farm has converted more of its corn and soybean fields to the gardens, and the Ioergers now raise fewer hogs and cattle.

Lowell Ioerger said there’s a feeling of fulfillment in growing flowers and produce compared to corn and soybeans.

“You’re selling directly to the public and eating your own food,” he said.

Ioerger explained he was reading a newspaper article about sponsoring Russian orphans in 2003, which prompted him and Janet to attend a meeting, where they chose Irons from 100 photos presented.

“When she came here, she just fit into our family so well,” Ioerger said, adding two years later, the family adopted another 14-year-old girl, Kristina, from the same orphanage. Irons was roommates with Kristina at the orphanage, and now they’re sisters. Kristina is a hairstylist in the Bloomington area and helps out on the farm regularly.

“We were always taking in stray kids,” Ioerger said, explaining many of their sons’ friends would stay at the house as well as nieces and nephews.

Irons’ parents enjoy watching their daughter build on her successes and pass her skills down to her daughters.

“It’s very therapeutic looking at the flowers, knowing we did this, we created this,” Irons said. “It’s amazing.”