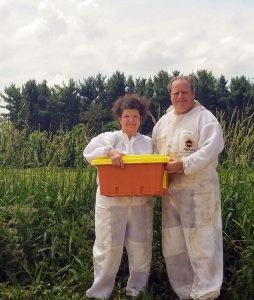 Sharon and Phil Raines prepare for new customers to pick up their bees. The Raines sell 100 to 150 nucs, or nucleus hives, to help new beekeepers get started. (Photo courtesy of Phil Raines)

On their family farm near Davis, Phil and Sharon Raines use animal husbandry practices with their winged livestock. The Winnebago-Boone Farm Bureau director has worked with bees for 25 years, the last 14 as a full-time beekeeper.

This year, they are caring for 350 to 400 hives. Those expected to produce a honey crop are located on farms in northwest Illinois and southwest Wisconsin. Meanwhile, other pollinating dynamos temporarily locate on specialty farms that grow pumpkins, watermelons, apples, cranberries and cherries.

“Without those bees, there is no crop,” Phil Raines said.

From his honey producers, Raines harvests 350 to 400 gallons of the natural sweetener annually. The couple also makes and sells beeswax products, including candles, soap, lotion and lip balm.

For honey production, Raines works with farmers with pasture and hayfields, especially those grown for beef cattle. Those hives remain in place for the season. The bees will forage within a 2-mile radius of their hive, he said.

The hives of working pollinators rotate among specialty farms around the state. Raines explained the hives are placed in orchards at night and removed after 10 to 15 days.

Illinois, the nation’s No. 1 pumpkin state, also produces many specialty crops and needs a pollinator army. Two hives are needed to pollinate each acre of pumpkins, while an acre of apple trees needs one hive, according to Raines.

The beekeeper pays particular attention to growers’ care for his working pollinators and deals with those who agree not to apply fungicides and insecticides that harm bees while his hives are there.

Typically, the traveling bees don’t produce a honey crop due to their pollination of a monoculture, where only one type of crop is grown at a time, and relocation stress. 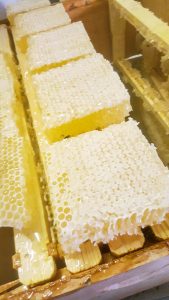 In August, the Raineses harvest the honey before the queen bees lay eggs, known as a winter cluster, in September. In late October and early November, Raines’ bees head west on semis to overwinter in massive potato cellars in Idaho. The bees go dormant in the totally black conditions where carbon dioxide is removed and temperatures range between 38 and 42 degrees.

“Animal husbandry (with bees) is critical; you’ve got to be forward thinking,” Raines said. “Next month, I’m planning how to pull off the honey crop and prepare for winter.”

In late January, Raines’ bees go back to work after they’re shipped to Fresno, California, to orchards that grow almonds, peaches, plums and nectarines.

“We go to California three times to check and make sure they’re healthy and well fed,” Raines said. By late March, the bees that have grown big on almond pollen return to Illinois and repeat the pollination cycle.

Raines Honey Farm products may be ordered online at raineshoneyfarm.com or Facebook @raines.honey.farm.4. Honey is available at the on-farm, self-serve honey stand daily from 8 a.m. to 5 p.m.

Farming sisters prove ‘yes, you can grow lavender in Illinois’