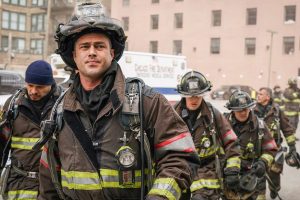 Chicago Fire is one of several TV shows being film regularly in Chicago. (Photo courtesy of NBC)

Film production revenues are the costs associated with film, television, streaming, and digital media, which have steadily increased over the past 10 years. Additionally, film permits issued by the City of Chicago have also reached pre-pandemic levels.

“Illinois has always played a special role in the zeitgeist of American culture and as a state we’re proud to be on full display during what has become a golden age of film and television,” said Pritzker. “The fact that we have surpassed pre-pandemic levels speaks to the strength of our high-quality filming facilities, locations and initiatives like the Production Film Tax credit.”

In addition to film revenues statistics, which are collected by the state as part of the Illinois Film Production Tax Credit, the Chicago Film Office at the Department of Cultural Affairs and Special Events (DCASE) recorded gains in the number of permits administered.

Additionally, in 2021 Chicago Film Office launched a new “Chicago Made” initiative to strengthen Chicago’s TV and film industry — including a workforce development program and public awareness campaign based on recommendations from the City of Chicago’s COVID-19 Recovery Task Force.

“Chicago’s TV and Film industry is globally renowned and continues to generate significant economic and cultural gains for our city,” said Lightfoot. “Our forward-thinking Chicago Film Office is building the infrastructure with initiatives such as the ‘Chicago Made’ workforce program that will continue to open doors for our residents and deepen investments in our communities.”

In addition to major prime-time programs such as NBC’s “Chicago Fire,” “Chicago Med,” and “Chicago PD” being renewed for an additional season, 2021 also brought new TV productions like “Shining Girls” from Apple TV+ and “61st Street” from AMC Studios.

Major high-profile TV productions and movies were also filmed in Chicago suburbs and rural areas, including HBO’s critically acclaimed series, “Somebody Somewhere,” which was filmed in Lockport. Moreover, 2021 brought new studios to the greater Northeast region of Illinois, such as Legendary Television which filmed “Paper Girls” and “Lightyears” for Amazon Studios primarily on location outside of Chicago.

“Every tv and film project here in Illinois, brings a flurry of economic activity to our state,” said Sylvia I. Garcia, Director of the Illinois Department of Commerce and Economic Opportunity, which houses the Illinois Film Office. “Every production creates a multiplier effect by increasing foot traffic to local stores and restaurants, recruiting local extras and hiring our talented crews, and then by making our incredible Illinois landmarks well known to audiences across the globe.”