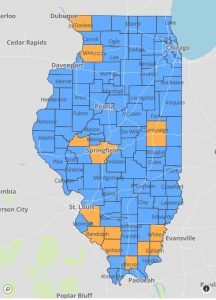 This Illinois Department of Public Health map shows the 13 counties in the state now considered to be in a ‘warning’ zone of having to return to some previous restrictions because of COVID-19 statistical increases.

SPRINGFIELD – The Illinois Department of Public Health said on Friday, July 31 that 13 counties in the state are now in danger of having to reimpose social and economic restrictions as the number of COVID-19 cases continues to rise. Later in the day, however, the agency’s site showed two additional counties with that designation.

Outbreaks have also been reported in long-term care facilities and there have been clusters associated with restaurants, churches and large sporting events including soccer, golf and softball tournaments, the IDPH said.

“Residents of many communities are not wearing face coverings that have been proven to reduce the spread of COVID-19,” the agency said in a statement. “Public health officials are finding that most contacts to cases are testing positive as well.”

As recently as Thursday, July 30 only four counties were at the warning level including Adams, LaSalle and Peoria, but those three counties were not on the list released Friday. Randolph County, in southern Illinois, is the only one of the four to remain on the list.

All 102 counties in Illinois are in Phase 4 of the reopening plan, which means businesses are allowed to operate within public health guidelines such as capacity limits and face mask requirements, and gatherings of up to 50 people are allowed.

Individual regions, however, can be forced to reimpose several restrictions seen in previous phases of the reopening plan if they show increasing positivity rates for seven out of 10 days and they have a seven-day sustained increase in hospital admissions for COVID-19 or a decrease to 20 percent capacity of intensive care unit beds.

IDPH uses several measures to determine if a county is experiencing stable COVID-19 activity, or if there are warning signs of increased COVID-19 risk in the county.

Warnings can be triggered if there are more than 50 new cases per 100,000 people in the county, if the number of deaths in a week increases by more than 20 percent for two consecutive weeks, or if the seven-day positivity rate rises above 8 percent. 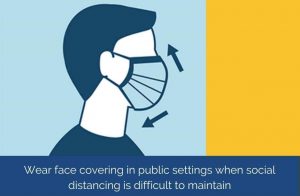 The announcement of the new warning-level counties came as IDPH reported 1,941 new confirmed cases of COVID-19 over the previous 24 hours, the highest single-day number since April 27. There were also 21 new virus-related deaths over the day.

That brings the statewide totals since the pandemic first appeared in Illinois to 178,837 cases and 7,495 deaths.

Those numbers may be revised in the near future, however, because IDPH announced late Friday that there have been processing delays on tests conducted at state-run sites that sent specimens to one laboratory, Reditus Labs.

IDPH said as many as 3,800 tests conducted at community-based or mobile sites between July 12 and July 24 were delayed beyond the appropriate reporting window. Those include sites in Aurora, Bloomington, East St. Louis, P)eoria, Rockford, Rolling Meadows and South Holland.

Overall, those sites processed more than 450,000 tests during the July 12-24 time frame, IDPH said, and the vast majority of those people tested have already received their results. IDPH recommends that individuals who have not yet received their results visit a free state-run testing site to have another specimen collected.

IDPH said it is working closely with Reditus Labs to improve their interface with specimen collection at state-run sites and ensure the processing of specimens moves forward more quickly. Specimens collected after July 24 are being processed and individuals will be promptly notified of their results, the agency said.