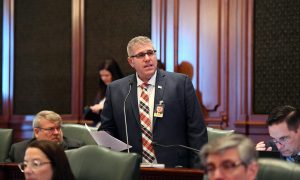 Rep. Darren Bailey, R-Xenia, has amended his lawsuit challenging Gov. J.B. Pritzker’s authority to issue consecutive states of emergency and stay-at-home orders in response to the COVID-19 pandemic. In a revised lawsuit filed Wednesday, May 13, Bailey cites a 19-year-old memo from the office of then-Attorney General Jim Ryan that says the Illinois Emergency Management Agency Act allows a governor to wield expanded authority only “for up to 30 days.” (Repbailey.com photo)

SPRINGFIELD — A document included in a downstate representative’s revised lawsuit against Gov. J.B. Pritzker suggests the governor does not have the authority to issue successive disaster proclamations.

On April 23, Republican Rep. Darren Bailey, from Xenia, first alleged the governor overstepped his power by declaring more than one state of emergency to address the COVID-19 pandemic.

Now, in amended arguments, Bailey cites a memo from the office of Republican Attorney General Jim Ryan in 2001 that says the Illinois Emergency Management Agency Act allows a governor to wield expanded authority only “for up to 30 days.”

Pritzker first issued a disaster proclamation on March 9. Since then, he has extended that proclamation twice, most recently through May 30.

In the 19-year-old memo, senior assistant attorney general Michael Luke wrote that expanding those emergency powers to last more than 30 days “would render the limitation clause meaningless.” Taking into account the rest of the law, he added, a governor would need permission from the General Assembly for any extension.

“This Attorney General opinion lays bare the overreach of the executive branch being perpetrated by this gamesmanship,” Thomas DeVore, Bailey’s attorney, wrote in the revised lawsuit filed Wednesday.

While that document is not legally binding, DeVore said the “optics” of its existence “will be horrific for the governor’s office,” especially because the attorney general’s office did not disclose the memo to a judge sooner.

Pritkzer, during his daily COVID-19 update May 13 in Chicago, said current Democratic Attorney General Kwame Raoul “has not issued that (memo) to us,” and pointed out that the office is representing him in this case.

The disaster financing section of the act further supports that argument, Bailey alleges in the lawsuit. A governor is allowed to spend a certain pot of state money on a disaster, and, if the General Assembly is not in session, to transfer funds from other accounts as needed only “until such a time” as the Legislature “can convene in regular or extraordinary session.”

Raoul’s office previously argued that if Pritzker’s disaster proclamation was allowed to lapse on April 8, or 30 days after the first one was issued, it “would lead to absurd, unjust, and profoundly harmful results to a degree rarely, if ever, contemplated by an Illinois court.”

The law does not specify a governor cannot declare more than one disaster, the office argued in a court filing.

In each of Pritzker’s proclamations, he cites COVID-19 as a continuing public health disaster.

According to the IEMA Act, a disaster is a wide breadth of circumstances “requiring emergency action to avert danger or damage, epidemic … (or) public health emergencies. …”

DeVore, in an interview, said that is key. He does not contest Pritzker was legally permitted to issue the first proclamation, but said the following two were not allowed. A disaster exists, he said, only if there is a threat that requires emergency action to avoid.

“How are you going to avert something — a public health emergency — that’s already here? That is why Governor Pritzker cannot issue a second or third proclamation. He’s admitted he’s not trying to avert anything, he’s trying to manage its effects,” DeVore said.

And he argued the governor’s legal team is practicing legal gymnastics by building a 30-day deadline into each proclamation.

“I assure you he’s putting that in there to cause that proclamation to expire so he can then issue another one and recharge his emergency powers,” DeVore said.

The Legislature, when it convenes next week for the first time since March 5, should not pass a law allowing Pritzker to continue using emergency powers to combat COVID-19, he added. That would be an unconstitutional, “excessive” delegation of the General Assembly’s powers.

Bailey is asking a judge to declare the governor’s second and third disaster proclamations unlawful and prevent him from issuing any further ones.

He is also asking a judge to agree the Department of Public Health, not the governor, has “supreme authority” to place a resident under quarantine and shutter a business due to public health concerns.

A second Republican state representative who also filed a lawsuit challenging Pritzker’s emergency powers asked a judge Tuesday to halt enforcement of the stay-at-home order until a court rules in his case.

Machesney Park Rep. John Cabello asked the Winnebago County Circuit Court for a temporary restraining order because, he said in a statement, the governor’s plan to reopen Illinois’ economy is “wholly inadequate.”

“I have filed my temporary restraining order to put the governor on notice that we are not going to let him dictate to local communities,” Cabello said. “I trust our local officials and our citizens more than I trust politicians from Springfield or Chicago.”

The outcome of Cabello’s case could affect all state residents. If a judge agrees Pritzker cannot legally issue successive 30-day disaster proclamations, it could release residents and businesses from the governor’s restrictions.

DeVore, who is also Cabello’s attorney, said shortly after this request was filed May 12, the attorney general’s office asked the case be moved to a federal court. And earlier this week, lawyers also asked three other cases be moved to a federal court — one filed on behalf of a hair salon owner and two for a restauranteur with two establishments. All are represented by DeVore.

The attorney general’s office, which represents Pritzker, did not comment on its motivation for a change in venue.

In an interview, DeVore said while his clients did not file their challenges in federal court, they do not oppose the shift.

“My clients could’ve went to a federal court. They didn’t. This is an issue of disagreement between the good people of the state of Illinois and the executive branch,” he said. “For some reason, the attorney general was not particularly excited about that.”

They are asking judges in three counties — now, federal courts — to agree their businesses were shuttered without an avenue to appeal, that the Emergency Management Agency Act cannot afford Pritzker the power to close businesses, and that the steps outlined in the Illinois Department of Public Health statute must be followed.