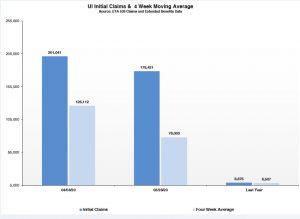 More than 200,000 Illinois workers filed first-time unemployment claims during the week that ended April 4, bringing the total to more than half a million in the four weeks since the COVID-19 outbreak began to impact the labor market. (Source: Illinois Department of Employment Security)

SPRINGFIELD – More than half a million Illinois workers have filed first-time unemployment claims in the four weeks since the COVID-19 outbreak first hit the labor market.

Economists at the University of Illinois are now forecasting a major economic downturn that could last months, or even years, depending on the local severity of the pandemic.

The unemployment claims account for nearly 8 percent of the state’s civilian labor force, and they are just part of the estimated 17 million workers nationwide who have lost their jobs over the past month.

The Illinois Department of Employment Security said Thursday that during the week that ended April 2, 201,041 Illinoisans filed initial claims, surpassing the previous record of 178,421 that was set just one week earlier.

The most recent estimates from the Washington-based Economic Policy Institute, dated April 1, suggest that as many as 779,000 people in Illinois could be out of work by July, which would boost the state’s unemployment rate to 15.6 percent.

That would be higher than the historic record rate of 13.1 percent set in February 1983, according to the U.S. Bureau of Labor Statistics.

On the same day the new numbers came out, the Institute of Government and Public Affairs at the University of Illinois issued a report suggesting the economic downturn could have a devastating impact on the state’s economy, and on state revenues in Illinois, depending on how severe the outbreak is and how long it takes the state’s economy to recover.

Economically, the researchers said, a low-severity pandemic would likely push growth in gross domestic product this year to 0 percent. That would sink to about -3 percent growth under a moderately-severe pandemic, and -6 percent under a severe pandemic.

All of those scenarios assume the economy would recover quickly once the pandemic ends and that GDP growth would return to its normal rate of about 2 percent by 2023.

State revenues are also expected to take a major hit, but the extent of the losses would depend both on the severity of the economic downturn and how long it takes the economy to recover.

Under the most optimistic scenario — a low-severity pandemic followed by a quick recovery — the state could expect to see a decline of about $4.3 billion across calendar years 2020 and 2021.

Under a worst-case scenario — a severe pandemic followed by a slow, protracted recovery — the researchers estimate the state could see a loss of revenue totaling $28.4 billion through calendar year 2023.

The researchers also noted that the full impact on the state and its economy could be lessened, depending on the kind of economic recovery measures enacted at the federal level.