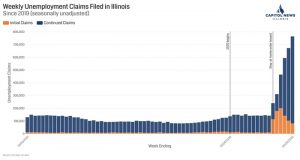 SPRINGFIELD — Unemployment in Illinois and the U.S. continues to balloon amid the novel coronavirus pandemic.

The state reported 81,596 first-time claims in the week ending April 25, during which time more than 3.8 million claims were submitted nationally.

That means 818,917 Illinoisans filed for unemployment since March 21, and 681,041 drew unemployment benefits during the week ending April 25. According to the U.S. Bureau of Labor Statistics, that is about 10.7 percent of Illinois’ civilian work force.

The claims from March 1 to April 25 this year were more than 10 times those made in the same period last year, when approximately 69,000 total claims were field in Illinois.

This is the first time in five weeks that the number of initial claims in Illinois fell under 100,000. The peak was the week of April 4, when 201,041 initial claims were made.

Nationally, more than 30 million people filed jobless claims since the beginning of the pandemic.

The seasonally adjusted unemployment rate of 12.4 percent for the week ending April 18 was an increase of 1.5 percent from the previous week, once again marking the highest figure in the history of the metric.

The more than 81,000 claims filed in Illinois last week mark a decrease of about 21,000 from the week prior. The four-week moving average for claims was 131,683, according to the Illinois Department of Employment Security.

Despite several reports of people continuing to have difficulty accessing unemployment, Gov. J.B. Pritzker said IDES has ramped up its capacity for its website and its ability to take phone calls. At his daily news briefing on COVID-19 Thursday, he took questions on the ongoing issues.

“There’s no doubt the system started out unprepared for this unprecedented level of filings,” Pritzker said. “But at this point, I must say, the ability to connect online is available to everyone.”

Pritzker said some people might have difficulty getting through the system if they previously filed a fraudulent claim, there were “challenges to the veracity of certain aspects of the forms that they filed,” or they had forgotten their password. But he said it is working “reasonably well” considering the unprecedented number of claims it is receiving.

He also said there are “many more people answering phones” in response to the increase in filings, and “many of them are working overtime weekends and so on to get done what they need to.”

Of note, Illinois has not yet set up its pandemic unemployment assistance system, which would apply to groups not normally covered by unemployment insurance, such as independent contractors, the self-employed and freelancers.

These federally-paid benefits would last for up to 39 weeks, but that program is not expected to be up and running until the week of May 11. The state is contracting with the private firm Deloitte to complete the system.

Earlier this week, the Freelancers Union called on the state to expedite the process and provide lines of zero-interest credit in the meantime.

“We are facing the greatest crisis to the freelance workforce in modern history,” Rafael Espinal, the union’s president said. “I have heard from thousands of freelancers who are losing gigs due to COVID-19. They’re unsure of how they will be able to pay the bills. The Governor must do everything in his power to guarantee freelancers will get the unemployment benefits that were secured for them in the CARES Act as soon as possible. The slow rollout of benefits for freelance workers further highlights the need for the government to focus on supporting its independent workforce.”