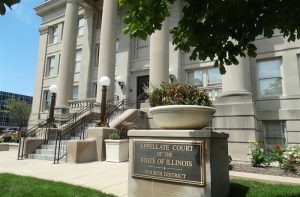 THIS STORY HAS BEEN UPDATED:

SPRINGFIELD – Gov. J.B. Pritzker’s administration said Friday, Feb. 18 it will ask the Illinois Supreme Court for an “expedited review” of an appellate court’s decision not to rule on a lower court order that invalidated COVID-19 mitigation measures for roughly 170 school districts that were parties in a set of consolidated lawsuits.

Late Thursday night, Feb. 17, the 4th District Court of Appeals said it would not review the temporary restraining order issued Feb. 4 by a Sangamon County judge, calling the issue “moot” because the emergency rules issued earlier by the Illinois Department of Public Health have expired and a legislative panel in charge of reviewing such rules had declined to extend them.

But the court also said individual school districts remain free to adopt their own mitigation policies, independent of any executive orders or state emergency rules.

“The administration is working with the attorney general to request an expedited review of this decision from the Supreme Court,” Pritzker’s press secretary Jordan Abudayyeh said in a statement in the morning on Feb. 17. “In the meantime, the governor urges everyone to continue following the doctors’ advice to wear masks so students can remain safely learning in classrooms, and is encouraged that the court made it clear that school districts can continue to keep their own mitigations in place.”

Attorney General Kwame Raoul also issued a statement saying he too was disappointed by the decision.

“The appellate court’s failure to address the important legal issues in question has added to the confusion resulting from the circuit court’s decision prioritizing a relatively small group of plaintiffs who refuse to acknowledge science or the need for public health measures to protect vulnerable Illinois residents,” Raoul said.

On Feb. 4, Sangamon County Circuit Judge Raylene Grischow issued a temporary restraining order blocking the enforcement of mask and vaccine mandates and the exclusion from school of people deemed close contacts with COVID-19 patients without giving those students and employees due process.

That order applied to the roughly 170 school districts who were named in the consolidated lawsuits. There are 852 public school districts in Illinois, plus numerous private school systems covered by the rules.

The cases were filed in various counties in September after the Illinois Department of Public Health issued emergency rules mandating that masks be worn in school settings, that unvaccinated school staff would have to submit to regular testing, and that students and staff deemed to be “close contacts” with people infected by COVID-19 be excluded from school buildings and events for a period of time.

Those emergency rules were issued in response to a series of Pritzker’s executive orders.

However, while the administration was appealing that decision to the 4th District, the emergency rules that IDPH had issued in September expired, and on Tuesday, Feb. 14, the legislative Joint Committee on Administrative Rules voted not to extend them, citing concerns about the restraining order and the pending appeal.

“We’re currently in a situation where the TRO says this rule is not enforceable,” Rep. Michael Halpin, D-Rock Island, a JCAR member, said in voting for the motion to suspend the rule. “It’s possible, if not probable, that this might change on appeal, but as we now sit here, for that reason, I’ll vote yes.”

The 4th District panel, however, cited the JCAR action as its reason for not ruling in the appeal, saying the underlying rules covered by the restraining order were no longer in place.

“Because the emergency rules voided by the TRO are no longer in effect, a controversy regarding the application of those rules no longer exists. Thus, the matter is moot,” the court wrote.

The opinion was written by Justice John W. Turner. Justice Thomas M. Harris concurred in the opinion while Justice Lisa Holder White concurred in part, but said the issues concerning Pritzker’s executive orders were not moot and the court should have ruled on them.

“As it stands, the majority’s decision leaves open the question of whether the circuit court properly enjoined the enforcement of the executive orders,” Holder White wrote.

Impact on other districts

It was unclear Friday exactly what, if any, state-issued mitigation mandates remain in place for schools in Illinois.

The 4th District court’s opinion indicated that the Sangamon County restraining order also applied to the governor’s executive orders. But both Pritzker and Raoul have said they believe the executive orders remain in place.

“While the Appellate Court’s ruling does not affect the enforceability of the governor’s executive orders, the decision does fundamentally misapply important principles of Illinois law related to the issuance of temporary restraining orders, such as the order issued by the trial court,” Raoul said in his statement Friday.

Meanwhile, the court’s opinion also said individual districts that are not parties in the underlying lawsuit still have authority to adopt their own mitigation policies, independent of the governor’s executive orders or state agency emergency rules.

Many of those districts, however, have negotiated the details of their mitigation plans with local teachers unions, and the Illinois Federation of Teachers said Friday that they should continue abiding by those agreements.

“We continue to insist that school districts statewide abide by existing collective bargaining agreements that are in place to promote health and safety in schools and to follow our laws around safe schools and workplaces,” IFT president Dan Montgomery said in a statement. “As cases continue to decline, discussions about removing these mitigations must be based on good public health decisions. Medical science tells us that vaccinations, masking, and proper ventilation have been the best ways to maintain health in schools.”

The appellate court’s decision comes the Pritzker administration is preparing to roll back the statewide indoor mask mandate on Feb. 28. Pritzker announced that plan on Feb. 9 but said he intended to keep the mandate in place for schools.

Meanwhile, the issue of mask mandates has become more contentious in the General Assembly where, on Thursday, House Democrats voted to remove nine Republican lawmakers from the chamber for refusing to abide by the House’s own masking rule.

“This appellate court decision is a clear indication that Gov. Pritzker’s unilateral decision-making relative to COVID-19 must end,” he said. “We are well beyond the point when the Governor should respect the authority and processes of the two other coequal branches of government. Rather than one-man-rule, the three branches should be working together to create clarity, not chaos.”