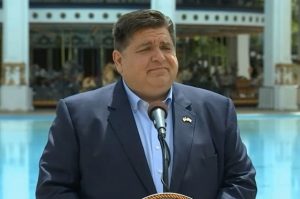 Gov. J.B. Pritzker speaks at Six Flags Great America in Gurnee Thursday, May 13 to announce that the theme park will be giving away 50,000 free tickets to vaccinated individuals. (Blueroomstream.com)

SPRINGFIELD – The state is opening vaccinations to Illinoisans age 12-15, and a major theme park operator is offering 50,000 free admission tickets in an effort to encourage vaccination in that age group.

That news came as the governor’s office confirmed the state will enter the “bridge” phase of expanded reopening Friday, May 14 amid decreasing transmission rates, while first-time unemployment claims increased from the prior week and continued claims dropped.

But the vaccination pace has slowed, with about 76,082 vaccine doses administered on average daily over the previous seven days. That’s down from a peak of over 130,000 daily in mid-April.

Gov. J.B. Pritzker said at a news conference at the Gurnee Six Flags Great America location that incentives such as free tickets could nudge more Illinoisans toward taking the vaccine.

“I think that there are people who, hearing that there’s an incentive knowing that it’s easy to get vaccinated at a place like this or somewhere near where you live,” Pritzker said. “There are an awful lot of people out there that just haven’t had time or they haven’t had a, you know, that extra little push to go get it done”

The state is sending Illinois National Guard mobile vaccination teams to the Gurnee location on June 5 and 6, and the teams will return if turnout is high. Six Flags will announce additional details in the coming weeks, according to the governor’s office. As well, “a significant portion” of the tickets will be distributed through local health departments, with more information forthcoming on a “county-by-county basis.”

Mobile teams are a key component of the state’s effort to target vaccinations to hesitant or hard-to-reach communities. The Illinois Department of Public Health said in a news release May 12 it is also enrolling pediatricians into the state immunization registry to allow them to administer COVID-19 vaccines. As well, schools may partner with the local health department or pharmacy to set up vaccination clinics for students.

Rep. Mike Zalewski, a Democrat from Riverside, is sponsoring a measure he calls the “shot and a beer act” to incentivize those age 21 and older to be vaccinated. That would allow Illinois bars to offer one free alcoholic drink to a customer who can prove they are vaccinated.

“We think it will help overcome vaccine hesitancy,” Zalewski said in a news conference Thursday, noting he was hopeful the measure could pass before the May 31 adjournment of the General Assembly.

The U.S. Food and Drug Administration recently expanded the emergency use authorization for the vaccine manufactured by Pfizer-BioNtech, and the state announced Thursday vaccination sites would be ready to vaccinate 12-15 year-olds this week.

According to health officials, the Pfizer-BioNTech vaccine was found to be 100 percent effective in preventing COVID-19 among participants ages 12 through 15 years, and side effects were similar to those 16 years of age and older, including pain at the injection site, tiredness, headache, chills, muscle and joint pain, and fever.

The bridge phase to full reopening that is set to begin Friday would allow theme parks such as Six Flags and its Hurricane Harbor water park locations to operate at 60 percent capacity, up from 25 percent under Phase 4 guidelines.

Also on Thursday, May 13, the U.S. Centers for Disease Control and Prevention released new guidance for masking which said fully vaccinated people can stop wearing masks in most indoor and outdoor locations, with exceptions for public transportation, planes, hospitals, doctors offices and prisons.

In response, Pritzker tweeted, “I firmly believe in following the science and will revise my executive orders in line with (CDC) guidelines lifting additional mitigations for vaccinated people. The scientists’ message is clear: if you are vaccinated, you can safely do much more.”

The governor also said at the Thursday news conference that the Chicago White Sox and Cubs will be adding sections in their ballparks for those who are fully vaccinated in order to maximize their allowable capacity. The capacity will increase to 60 percent at each park later in the month as well.

Also in the bridge phase, restaurants and bars can increase capacity from 25 percent to 30 percent, and outdoor capacity is allowed up to 50 percent for standing areas. As well, vaccinated people do not count against capacity limits.  The largest increase is to social events, which can allow 250 people indoors and 500 outdoors. Previously, those were capped at 50 people.

Pritzker’s office has said Phase 5, which is free of capacity limitations, could happen as early as June 11 if transmission numbers continue to decrease.

As of Thursday, the seven-day rolling average case positivity rate for COVID-19 was 2.7 percent, down from a recent high of 4.4 percent on April 12. Hospitalizations continued on a downward trend as well, with 1,765 people hospitalized for COVID-19 at the end of Wednesday night, a low since April 6.

In a separate news conference Wednesday, May 12, Pritzker said he did not plan to opt the state out of a federal plan that allows people on unemployment to receive $300 extra per week in unemployment compensation.

“Our job here is to make sure that we’re creating jobs and helping people to rebuild the lives that they had before, the pandemic,” the governor said when asked about the extra $3000 payments. “And so we’re not going to pull the rug out from under people. What we are going to do is make sure that we’re creating promoting as many jobs as possible and attracting people to those jobs.”