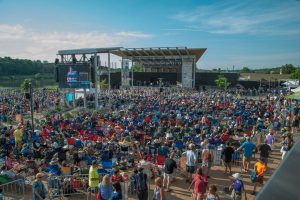 SUMMER EVENTS: Gov. J.B. Pritzker said Thursday, April 9, one month since he issued a state of emergency, it is “unlikely” his stay-at-home order can be lifted safely before April 30 and organizers of large summer events “need to think seriously” about canceling them.

“From my perspective today, I do not see how we’re going to have large gatherings of people again until we have a vaccine, which is months and months away,” Pritzker said. “I would not risk having large groups of people getting together anywhere, and I think that’s hard for everybody to hear, but it’s just a fact.”

The governor added an increase in testing residents, tracing social spread of COVID-19 and treating those who are ill are “not enough” for him to green-light large scale festivals, fairs and other events.

The number of cases and virus-related deaths in Illinois is still rising, Pritzker said.

Even if the public health situation in Illinois begins to improve by the month’s end, state officials will consider other rules and restrictions to implement moving forward.

“It isn’t going to be that all the sudden you’re going to drop the stay-at-home and every other restriction,” Pritzker said, “and that’s because there is a propensity that if you do that, we’re going to see a big spike upward and again, hospitalizations, ICU beds filled, vents filled and more death.”

Since March 9, when the governor issued a disaster proclamation in response to the novel coronavirus pandemic, his administration limited gatherings to no more than 10 people, closed restaurants and bars to dine-in, enacted a stay-at-home order and shuttered schools.

MINIMUM WAGE:  The governor said Thursday, April 9, that implementing the next minimum wage increase in July — as dictated by statute the General Assembly approved last year — is still important. The minimum wage, which increased to $9.25 from $8.25 on Jan. 1 will increase again to $10 on July 1.

The scheduled raise is “very small,” Pritzker said, and the economic situation created by the pandemic should “indicate to you more than ever before” why it should be done.

NATIONAL GUARD: Illinois National Guard Adjutant General Richard Neely said at the news conference that as of Wednesday, April 8, there are 575 National Guardsmen engaged across the state supporting the COVID-19 response.

Those efforts range from operating testing facilities and augmenting emergency operation centers, to support of Stateville Correctional Center, which has seen an outbreak of the virus, to assisting in the buildout of an alternate care facility in Chicago. 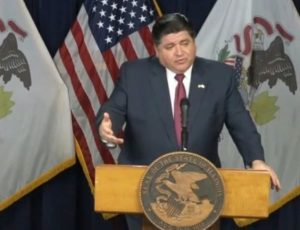 CHILD CARE PROGRAM: .Pritzker on Sunday, April 5, announced an expansion of eligibility to child care funding assistance for essential workers and an increase in financial support for emergency child care centers and homes.

Effective April 1, the governor said, all essential workers now qualify for the state’s Child Care Assistance Program, meaning the state will cover “most if not all of the cost of care” for qualifying workers.

“That includes everyone from nurses and doctors to support staff in hospitals, to grocery store clerks and food producers,” he said.

Information on the assistance is available at coronavirus.illinois.gov and at DHS.illinois.gov/helpishere.

Also effective April 1, the state will pay 30 percent above the usual reimbursement rates to emergency child care centers and homes.