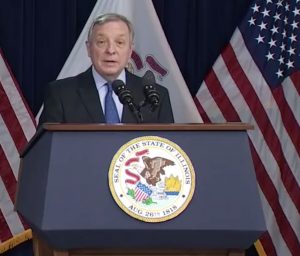 U.S. Sen. Dick Durbin speaks at a briefing in Chicago Friday, Feb. 26 where it was announced the United Center, where the Chicago Bulls and Blackhawks play, will serve as a mass vaccination site. Also in attendance was Gov. J.B. Pritzker, U.S. Sen. Tammy Duckworth, Cook County Board President Toni Preckwinkle and Chicago Mayor Lori Lightfoot. (Illinois.gov)

SPRINGFIELD – State and federal officials on Friday, Feb. 26 announced a new federal mass COVID-19 vaccination site will be opening March 10 at the United Center in Chicago.

The new site will prioritize access for seniors and be open to any Phase 1B-plus eligible residents throughout the state, which now includes those 16 years of age or older with underlying conditions.

“The United Center is one of the best locations for vaccinating large numbers of people in America: It’s easy to get to, is in the midst of a medically underserved community, can handle large crowds and is well known to everyone in Illinois,” Gov. J.B. Pritzker said at a briefing in Chicago.

“As more vaccines arrive, we will be opening more of those sites and assisting our local public health departments in doing that,” Pritzker said.

The addition of the United Center means Illinois now has 15 state supported mass vaccination sites, including locations in Springfield, Rockford, Carbondale and Metro East. There are also 97 vaccination sites operated by local public health departments across the state, as well as private pharmacy chains.

Pritzker was joined by Cook County Board President Toni Preckwinkle, Chicago Mayor Lori Lightfoot and U.S. Sens. Dick Durbin and Tammy Duckworth at a press conference Friday in Chicago to make the announcement.

The vaccine that will be supplied at this site could include the Johnson & Johnson one-shot vaccine, Pritzker said, but that is dependent on whether the U.S. Food and Drug Administration advisory panel grants the vaccine Emergency Use Authorization. The panel was set to meet Friday to make a final decision.

The United Center will be a “federally-supported, state managed, locally executed evolution,” said Kevin Sligh, acting administrator for FEMA Region 5. The mass vaccination site will be supported by the U.S. Department of Defense, the state of Illinois, Cook County and the city of Chicago. 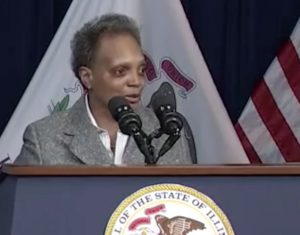 Chicago Mayor Lori Lightfoot speaks at a briefing in Chicago Friday, Feb. 26 where it was announced the United Center sports arena will serve as a mass vaccination site. (Illinois.gov)

Once the site opens on March 10, appointments will be available to the remaining Phase 1B-plus eligible residents, which includes non-health care frontline essential workers, inmates and those 16 years or older with underlying conditions.

Details about how the United Center vaccination site will operate are still being worked out, but tentatively it will be operating from 8 a.m. to 8 p.m. in the parking lot of the United Center, Brian Schiller, a FEMA official, said.

Federally supported pilot community vaccination centers similar to the United Center will be opening across the nation as part of the Biden administration’s effort to vaccinate underserved communities, according to a news release.

More information about the new site or how to make a vaccination appointment can be found at coronavirus.illinois.gov.

News about the new vaccination site came as COVID-19 cases and hospitalizations continued to decline in Illinois, with the statewide seven-day rolling positivity rate remaining at 2.5 percent Friday.

Illinois has administered more than 2.5 million doses of the COVID-19 vaccine to residents across the state, including 307,382 for long-term care residents. Pritzker said about one in seven Illinois residents have received at least the first dose of the vaccine. That’s out of 3.17 million doses of the Pfizer-BioNTech and Moderna vaccines received thus far.

“The White House has nearly doubled the weekly supply of doses coming to the state via direct shipments and other programs like the federal retail pharmacy program,” Pritzker said. “And based on public commitments from the federal government and from vaccine manufacturers, Illinois expects to receive an average of at 100,000 doses per day by mid-March.”

Illinois reported a total of 1.18 million cases of COVID-19 out of 17.9 million total test results reported, including 20,460 virus-related deaths since the pandemic started.