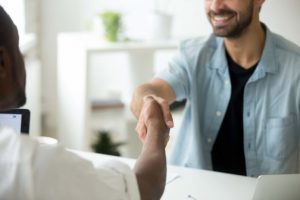 Illinois community banks have fared well in the second round of Payroll Protection Program loans, according to a leader of the smaller lending institutions. (Photo created by vanalya – www.freepik.com)

Illinois community banks are playing a major role in the second round of the federal Payroll Protection Program, according to a leader of the smaller lending institutions.

Kraig Lounsberry, president of Community Bankers Association of Illinois, said just like with the first round of PPP loans, glitches were aplenty when the latest round of Small Business Administration loan applications went live April 27.

“Despite serious issues with the SBA system, community banks under $10 billon blew through their $30 billion allotment by (the afternoon of April 28) and are now utilizing the overall pool,” Lounsberry said Friday.

He said that nationwide community bankers’ frustrations were high April 27-28, but then the SBA started denying access to robots and even set aside eight hours specifically for banks under $1 billion on April 29.

Lounsberry said just like with the first round of PPP loans, too many banks were trying to tap into the system when round 2 went live the morning of April 27.

“You’re trying to shove a camel through the eye of a needle,” he said of lenders nationwide trying to access the SBA loan portal at the same time.
He said it was good that some safeguards were put in place for round two of the loans that kept big banks from eating up the loan pool and giving the money to preferred customers. That is how Shake Shack, Ruth’s Chris Steak House and Potbelly Sandwich Shop wound up netting PPP money intended for small businesses.

“They did not set up the program,” Lounsberry said of the big banks that netted loans for high-profile clients, “and they were able to comply with the program parameters.”

He said the Illinois community bankers’ biggest frustration in the first go-round was not with the big banks getting loans for clients, it was that they could not get into the system to process their own loans.

“One bank did all of its applications in the hours before the program closed,” Lounsberry said.

He said some community banks may have lost customers when they could not get loan applications in and clients went to other banks, “but it was not because of a lack of trying,” the Bankers Association president said.

“No one was trying to take anyone’s customers,” Lounsberry said. “If one bank was not getting in, other banks were putting the loans through for them.”

Lounsberry said he had no idea how long the pool of PPP loans would last in round 2, noting that the pot of money lasted 12 days the first time around.

Community banks are used to helping small businesses, Lounsberry said, so the work the banks are doing with the small-business community is nothing out of the ordinary.