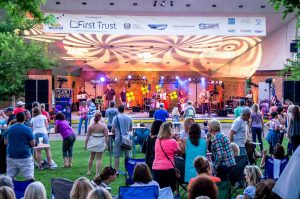 COVID-19-related shutdowns and event cancellations cost the state nearly a $500 million in tax revenue over the past year, State Comptroller Susana Mendoza said. Prior to the pandemic, tourism in the state brought in nearly $2.5 billion in sales tax revenue annually.

SPRINGFIELD – In a Senate Tourism and Hospitality Committee hearing Thursday, March 4 State Comptroller Susana Mendoza said she is hopeful outdoor events can return as early as this summer with large indoor events such as conventions and trade shows beginning in the fall.

Mendoza said that the return to holding events would be gradual and based on a number of factors, including COVID-19 transmission and vaccination rates.

“We’re on a favorable trajectory in the pandemic,” Mendoza told the committee on Thursday. “Let’s continue to prepare for the worst and plan for the best and optimally position ourselves to reopen with greater capacity sooner rather than later.”

The state’s COVID-19 seven-day rolling average was near a pandemic-low 2.4 percent for the sixth consecutive day Thursday, while hospitalizations continued to decrease and about 7.5 percent of the state’s population had been fully vaccinated.

Mendoza said she is hopeful the governor’s office will be receptive to a wider reopening approach this year.

“Working now in concert with industry shareholders, organized labor, the legislature, of course, and the administration on agreed safety measures is a sensible course,” she said.

Mendoza said allowing events and gatherings to resume safely in a quick and efficient manner would be key to jumpstarting an economic turnaround following the COVID-19 pandemic as the state works to return to a full reopening.

“My job, as you know, is to pay the state’s bills, which is hard to do when businesses close and people lose their jobs, and neither the businesses nor the employees are in any position to pay taxes,” Mendoza said.

Citing numbers from the state’s tourism office, Mendoza said COVID-19-related shutdowns and event cancellations cost the state nearly a $500 million in tax revenue over the past year. Prior to the pandemic, tourism in the state brought in nearly $2.5 billion in sales tax revenue annually, she said. 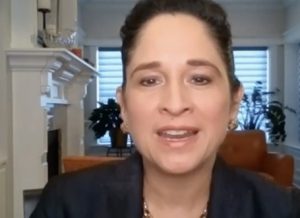 State Comptroller Susana Mendoza speaks before the Senate Tourism and Hospitality Committee in a virtual hearing on March 4. Mendoza said that outdoor events like the Illinois State Fair could return this summer with indoor events like conventions and trade shows to follow in the fall. (Blueroomstream.com)

“This is economic activity that we need to nurture and sustain to the best of our abilities while we combat the pandemic,” Mendoza added.

Mendoza cited recent decisions by the National Restaurant Association and the International Housewares Association to cancel their annual conventions in the state as an example of how the state could lose out on key income if large-scale events do not return in some capacity in 2021.

Some business leaders told the committee that they have been set back by the state’s current cap of 50 people for event gatherings under Phase 4 of the Restore Illinois guidelines. Phase 5 of the reopening plan would allow for a return of large-scale events with the necessary safety precautions, pending the widespread availability of a COVID-19 vaccine or treatment.

As a result of the federal government moving up projections that a vaccine could be available to the entire population by the end of May, business leaders asked the committee for a “ramp” approach to reopening under Phase 5 to allow events to resume in some capacity as soon as possible.

“I don’t think we need to have capacity limits,” Bob Reiter, president of the Chicago Federation of Labor told the committee on March 4. “We need to have percentages that account for actual spaces.”

In the “ramp” approach, Reiter asked that public health guidelines on event gatherings be made more flexible as the state works towards the next phase of reopening amid vaccinations and a declining positivity rate.

“I think we can move past that benchmark and set other benchmarks that get us closer to full capacity as the vaccines work their way through the system,” Reiter said.

Mendoza expressed confidence that the state could exercise flexibility in allowing events to return as early as this summer.

“As more and more of our people are vaccinated and Illinois continues in a positive direction, it’s really gratifying for me to hear that outdoor events like the State Fair this summer are a very real possibility,” Mendoza said.

“When necessary, we can always adjust and be nimble, recognizing of course that public health and safety are always the prime consideration,” she said.

Marilynn Gardner, president and CEO of Navy Pier Inc., told the committee that allowing Illinois’ flagship tourist attraction as well as the city’s McCormick Place convention center to reopen in at least partial capacity would be “critical” to an economic rebound for the entire state.

Gardner said the closure of the pier’s restaurants, theaters and attractions, as well as a shortened 2020 season, led to a 25 percent loss in revenue for Navy Pier last year.

“During this period, with every source of earned revenue diminished or suspended, we now face the harsh reality of potentially being forced to close permanently, and we can’t let that happen,” Gardner said.

“We need to start ramping up, we need to start hiring, start cleaning, and preparing for the season” Gardner added. “The health and safety of our community remains our top priority, but we also have to focus on the devastating impact on our ability to support the livelihoods and quality of life in our community.”

Mendoza said reopening McCormick Place, which was once the site of a temporary field hospital at the outset of the COVID-19 pandemic last year, would be symbolic of the state’s economic turnaround and reopening following the adversity of 2020.

“All of us, Democrats and Republicans, from Chicago to Galena to Cairo, we all agree we need to do whatever we can within appropriate safety protocols to gradually open this critical segment of our economy again,” she said.