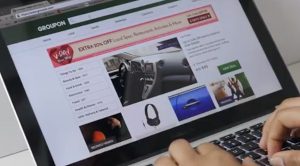 Groupon, an online advertising agency, has permanently eliminated 299 positions at its offices. The Chicago company was one of 21 local firms that eliminated at least 100 jobs in April due to the coronavirus. (Groupon photo)

However, when those merchants are not open, events are not happening and travel has been restricted, something must give. And what has given — here in Illinois — is jobs at the advertising agency. The Chicago company eliminated 299 jobs in April.

Nick Halliwell, manager of public relations at Groupon, said the company was already taking steps to reduce its cost structure to reflect the ongoing needs of the company, but the coronavirus pandemic led the company to increase its staff reductions.

“Given the restrictions in place around the world and the profound impact they’re having on our merchants and customers, in early April we had to make some tough decisions to address these business challenges,” Halliwell said.

Even though one out of five internet users ages 18-64 in the United States visits Groupon every month, the company still needed to reduce its workforce, Halliwell said.

He noted that all impacted employees will continue to receive health care benefits through the end of June.

Halliwell said the job cuts were made to better position the company for when COVID-19 restrictions lift.

“Our goal is to best position Groupon to continue making progress on our local experiences strategy when the disruption from COVID-19 ends, while continuing to fully support the needs of our merchants and customers in the meantime,” he said.

Groupon was not the only local household name to see job losses in April. Bed Bath and Beyond, Enterprise, Visionworks, Medieval Times, Hertz, Avis, Hyatt hotels and Benihana all also saw job losses of at least 100 workers, according to the Illinois Department of Commerce and Economic Opportunity.

Of the 9,631 announced Illinois job losses in April, 95 percent of them were related to COVID-19, according to Department of Commerce figures.

The biggest job losses in the state for April were at Woodward, Inc., a maker of airplane parts in Winnebago County. The company, with two locations in Loves Park and one in Machesney, laid off 700 workers and eliminated another 425 jobs.

“While our second-quarter performance was largely in line with our expectations, we started to see degradation during the quarter due to the COVID-19 global pandemic,” Thomas Gendron, chairman and chief executive officer of Woodward, said when the company’s second-quarter earnings were released in early May. “As a result, we have already taken significant actions to protect the health and safety of our global employee base, preserve our financial strength and flexibility, strictly manage our cash flow, and maintain our long-term growth position with the aerospace and industrial markets.”

“As we look at our 150-year history, Woodward has withstood the test of time and weathered numerous economic cycles,” Gendron said. “Our management team is well-equipped to further that legacy by navigating our business through these unprecedented times of uncertainty. As in past downturns, we remain committed to investing in technology and driving operational excellence initiatives through these challenging times.”

Cinemark USA, with nine theaters in Cook, Kane, DuPage, and Lake counties, laid off 476 workers at those movie houses.

The company said it is keeping its theaters nationwide closed, including ones in states, such as Texas and Georgia, that are reopening.

“We also understand the profound impact the closure of our theaters has on our employees, and it is not a decision we made lightly,” Cinemark CEO Mark Zoradi said in a message on the company’s website. “We will continue to support our employees to the best of our abilities as we navigate through this turbulent time.” 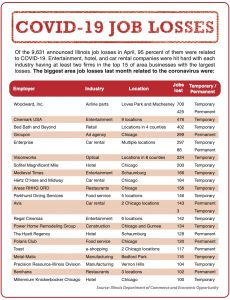 Matthew Blackmore, general manager of Sofitel Chicago Magnificent Mile Hotel, which furloughed 200 employees in April, said the hotel made the decision to close as of April 8.

“This certainly isn’t goodbye, it’s farewell for now,” Blackmore said in a message on the hotel’s website.

He said the decision to temporary close the hotel was a tough one to make.

“We currently live in a world that is changing rapidly — by the day and by the hour,” Blackmore said. “As we navigate through these times of change and uncertainty, we do so with the safety of both our loyal and valued guests and employees as our highest priority. We must support our local authorities as they work to halt the spread of COVID-19. And so, we have made the difficult decision to temporarily close the doors of our hotel.”

Here is a look at other major job losses in area counties:

In addition to the job losses listed above, here is a breakdown of other job losses per county:

Winnebago County saw the announced loss of 1,245 jobs in April.

In addition to the job losses at Woodward, the county will also lose 69 permanent positions at Anderson Automotive Group’s two Rockford locations.

Greenlee Tools announced it will be closing its facility at 1122 Research Parkway in Rockford and relocating to Elyria, Ohio. A total of 51 workers will be laid off in the relocation, which is scheduled to happen between June 26 and July 10.

Cook County saw the total loss of 2,841 jobs in April.

Preferred Airport Services, with two Chicago locations, also announced that it would be laying off 705 workers at its O’Hare facility and 124 workers at its Midway facility in the next two or three months.

Lake County saw the loss of 254 jobs in April.

The biggest loss of jobs was at Precision Resources-Illinois Division, a manufacturer of precision components, based in Vernon Hills. The company laid off 104 workers.

The biggest job loss were 73 people being laid off at Cinemark theaters in Woodridge.

The jobs at Benihana and Ra Sushi were permanently eliminated.

Eaglewood Resort and Spa in Itasca also announced that the 250 employees it laid off in March would have their furlough extended until June 1.

Leslie Bates Neighborhood House, with five locations in East St. Louis and one in Washington Park, announced it was permanently eliminating 67 positions because of a lost contract.

The company said that it received a Small Business Administration Payroll Protection Program loan to enable it to pay employees for another two months.

McLean County saw the announced elimination of 186 jobs in April.

Flexitech, an auto parts manufacture, said it would be eliminating 133 positions between April and June 1, 2021 as it closes its Bloomington facility.

Keplr Vision in Bloomington laid off 53 workers during April.