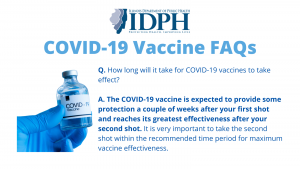 The rolling positivity rate stood at 5.5 percent, a decrease of two-tenths of a percentage point from the previous day, marking its lowest point since Oct. 20.

The one-day positivity rate was 5.6 percent Wednesday as the state reported 4,822 new cases among 86,121 test results reported over the previous 24 hours.

The Illinois Department of Public Health also reported 107 deaths over the previous 24 hours, bringing the confirmed COVID-19-related death toll to 18,398 since the pandemic first reached Illinois.

There have been 1,081,534 confirmed or probable cases among 14.9 million test results reported since the pandemic began.

Hospitalizations for COVID-19 continued to decrease as of Tuesday night Jan.19 as well, with 3,284 people hospitalized for the disease in Illinois, the lowest number since Oct. 30. Intensive care bed usage for the disease increased slightly from the day prior to 722 beds in use, while 379 COVID-19 of those patients were on ventilators.

Over the past 24 hours, vaccine administrators reported vaccinating 29,008 individuals, putting the total number of vaccinations conducted in the state at 537,740. That’s out of 1.3 million doses delivered to Illinois. Administrators have three days from when they conduct a vaccination to report doing so.

Of the vaccines delivered to the state, 524,050 have gone to a federal program aimed at vaccinating long-term care residents through a partnership with nationwide pharmacy chains. Of the doses administered, 86,180 have been part of that program.

Over the previous seven days, the state has vaccinated 21,869 individuals each day on average.

That act allows presidents to compel domestic industries “to expedite and expand the supply of materials and services,” such as vaccine materials or personal protective equipment, “from the U.S. industrial base needed to promote the national defense.”

While Phase 1A has prioritized health care workers and long-term care residents, Phase 1B includes people aged 65 years and older and non-health care frontline essential workers, defined as “those workers who are essential for the functioning of society and are at highest risk of exposure.”

These include first responders such as firefighters, law enforcement and security personnel; corrections officers and inmates; food and agriculture workers; postal service workers; manufacturers; grocery store workers; public transit workers; teachers and other educators; and shelter workers, among others.

Phase 1C, for which there is currently no timeline, tentatively includes people aged 16 to 64 years old with high-risk medical conditions and other essential workers.

Some Illinois counties begin Phase 1B of vaccine distribution