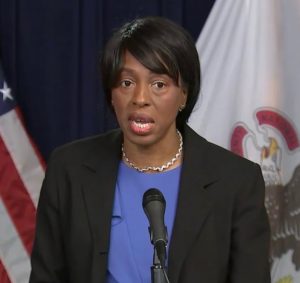 Region 1 of the state’s reopening plan saw a second straight day with a COVID-19 test positivity rate exceeding 8 percent, according to the most recent data, as it increased to 8.3 percent.

One more day above that threshold, and the state could levy increased mitigations in the region, including closing it to indoor dining and drinking.

“The concerning uptick in Region 1’s positivity — jumping more than two percentage points in two weeks even as the majority of Illinois continues to see downward trends – demands increased efforts to stop the spread in our northwestern counties,” said Gov. J.B. Pritzker on Tuesday, Sept. 29. “As other regions have demonstrated, stricter mitigations will lead to safer communities when people mask up, keep their distance, wash their hands and respect public health. It is my hope that the residents of Region 1 can turn this situation around quickly, and Dr. Ezike and I continue to coordinate with local officials to make that happen.”

“COVID-19 spread can increase very quickly, as we’ve seen in some regions in the state, now including Region 1,” said Illinois Department of Public Health Director Dr. Ngozi Ezike. “As the pandemic continues, so must our fight against it: Please, don’t hold or attend large events or mass gatherings, wear your face covering, and keep six feet of distance between you and others.”

Added mitigations include closure of bars and restaurants to indoor services, while those facilities in the region must now close to outdoor service at 11 p.m. until mitigations are lifted.

Meetings, social events and gatherings will be limited to the lesser of 25 guests or 25 percent of overall room capacity throughout the mitigation period, while party buses will not be allowed to operate. Gaming and casinos will close at 11 p.m. and be limited to 25 percent of capacity.

The region must see its positivity rate decrease to 6.5 percent or lower for three straight days to see mitigations lifted.

If the positivity rate averages between 6.5 and 8 percent, the new mitigations will remain in place. If averages greater than or equal to 8 percent after 14 days, more stringent mitigations may be applied, according to the governor’s office.

Region 4, which includes the Metro East area on the St. Louis border, saw its positivity rate tick up by one-tenth of a percentage point to 7.2 percent. That region must fall below 6.5 percent and remain there for three days in order for added mitigations to be lifted.

Also Tuesday, the Illinois Department of Public Health announced another 1,362 cases of the virus and 23 more deaths in COVID-19-positive individuals.

The death total is now at 8,637 in Illinois, and there have been 291,001 confirmed cases among more than 5.5 million test results reported. There were 45,624 test results reported over the previous 24 hours, making for a one-day positivity rate of 3 percent, which brought the rolling seven-day average rate to 3.6 percent.

At the end of the day Monday, Sept. 28, there were 1,535 people reported hospitalized with COVID-19 in Illinois, including 363 in intensive care unit beds and 151 on ventilators. Those numbers fluctuate considerably daily but have been trending slightly upward in recent weeks.

Northwest part of state might be headed for COVID-19 restrictions