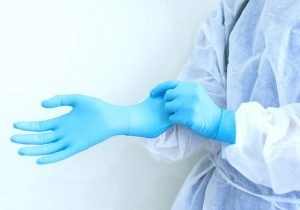 The Illinois Department of Public Health on Wednesday reported 11,378 new confirmed and probable cases of the disease over the previous 24 hours out of more than 114,000 tests performed, for a single-day case positivity rate of 10 percent.

SPRINGFIELD – The recent surge in COVID-19 cases in Illinois has shown signs of leveling off in recent days, but there has also been a large spike in new unemployment claims amid tighter economic restrictions now in place statewide.

The Illinois Department of Public Health on Wednesday, Nov. 25 reported 11,378 new confirmed and probable cases of the disease over the previous 24 hours out of more than 114,000 tests performed, for a single-day case positivity rate of 10 percent.

The rolling seven-day average positivity rate stood at 10.6 percent, marking the third consecutive day below 11 percent. It had been as high as 13.2 percent in the second wave on Nov. 13.

IDPH also reported an additional 155 deaths since Tuesday, Nov. 24 bringing the statewide total to 11,832. The state has now reported 685,467 cases of the disease since the pandemic began, and laboratories in the state have processed just over 10.1 million specimens.

Hospitalizations also showed signs of leveling. As of Nov. 24, there were 6,133 people in the state hospitalized for COVID-19, one fewer than the day before and 42 fewer than the peak recorded on Friday, Nov. 20. That number remains a source of concern, however, as it leaves only 25.3 percent of all hospital beds available to be staffed in the state while 18.8 percent of all hospital beds are occupied by COVID-19 patients.

Of those hospitalized, 1,208 were in intensive care units, and 679 were on ventilators, both of which were second-wave highs.

State officials have said it is still too early to tell whether the current trends are a result of the Tier 3 mitigation measures that were ordered statewide on Nov. 20. Those include closing casinos and video gaming facilities, limiting indoor gatherings to 25 percent of a room’s capacity and outdoor gatherings to 10 or fewer people.

Officials also warn of potential spikes in the numbers resulting from multifamily gatherings after the upcoming holiday weekend, and they have encouraged Illinoisans to move their Thanksgiving gatherings online instead of in person.

Meanwhile, there has been a surge in new unemployment claims filed in Illinois.

The Illinois Department of Employment Security reported Wednesday, Nov. 25 that 65,596 workers in the state filed first-time claims for regular unemployment during the week that ended Nov. 21, an increase of 40 percent from the week before.

In addition, the U.S. Department of Labor reported an additional 14,878 workers filed first-time claims that week for Pandemic Unemployment Assistance, a federally-funded program for gig workers, independent contractors and other self-employed individuals who don’t qualify for traditional unemployment insurance. That was a 47 percent increase from the week before.

During the week that ended Nov. 14, the federal agency said, 339,922 Illinois workers were receiving continuing unemployment benefits, down 1.9 percent from the prior week.

The Chicago-Naperville-Arlington Heights area posted the highest rate, at 7.8 percent, while Bloomington and Champaign-Urbana were tied for the lowest rates, at 4.1 percent.

The statewide jobless rate in October was 6.5 percent.

Positivity rate drops, but officials urge caution ahead of Thanksgiving