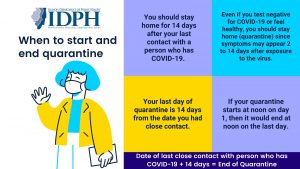 Hospitalizations showed signs they could be leveling as well, although they remained near record highs and ticked up from the day prior. As of Sunday evening (Nov. 22), the Illinois Department of Public Health reported 6,171 hospital beds in use by COVID-19 patients, which was an increase of 99 from Saturday evening but four below the record-high of 6,175 set Friday evening.

The decrease from Friday to Saturday (Nov. 20-21) was the first-time hospitalizations did not increase from the day prior since Oct. 24. As of Sunday, about 29 percent of the state’s staffable hospital beds were available.

Last week, IDPH began reporting hospital capacity based on available staff, rather than existing beds, in order to “make sure we had a fully accurate picture of how many patients could actually be cared for in hospitals across the state,” according to the department’s director, Dr. Ngozi Ezike.

“We can’t look only at the number of empty beds, but also the ability of the hospital to staff those empty beds,” she said. “Without doctors or nurses or respiratory therapists or other health care workers that can actually care for the patients, it really doesn’t matter how many beds you have.”

She said bed availability will be defined by the number of inpatient beds not in use that a hospital “attests can be staffed and ready for patient use within four hours.”

Intensive care bed usage pushed to a second-wave high as of Sunday night, with 1,206 COVID-19 patients occupying ICU beds. That left about 23 percent of the state’s staffable ICU beds unused.

Ventilator use on Sunday night shot to a high not seen since May 29, with 635 COVID-19 patients requiring the machines, an increase of 46 from the day prior.

“Let’s lessen the burden on all of our hospital teams and we can do this by not spreading infection over the Thanksgiving holiday by wearing our mask, by watching our distance, by washing our hands and by getting our flu shots,” she said.

She said people should consider hosting Thanksgiving events virtually rather than in person.

“Thanksgiving hasn’t happened yet,” she said. “People can still change their plans and change the outcome. We don’t have to have super-spreader events at homes throughout our state and throughout the country and then bring it back. Please reconsider your plans and see if we can be part of the solution to decrease infections instead of part of the plan to increase them.”

On a weekly, seven-day average from Monday through Sunday, Nov.22, the state averaged 6,058 people hospitalized for COVID-19 each day, an increase of 790, or 15 percent from the previous week. That rate of increase slowed significantly from the four weeks prior, when it increased anywhere from 24 to 31 percent each week.

The 586 ventilators used on average for the week ending Nov. 22 marked an increase of 124, or 27 percent, from the previous week. In the four weeks prior, the daily average ventilator use has increased each week by between 28 and 32 percent.

ICU beds showed a slightly slower increase than in previous weeks as well, with 1,179 in use on average for the week ending Nov. 22. That’s an increase of 176, or 18 percent, from the previous week’s average daily use. In the four weeks prior, that increases ranged from 21 to 29 percent.

Each of the state’s 11 mitigation regions were on a downtrend in positivity rates as of Nov. 20, the latest data available, with only Region 10 in suburban Cook County seeing its rate increase from the day prior. Positivity rates ranged from 12.6 percent in southern Illinois to 19.2 percent in suburban Will and Kankakee counties.