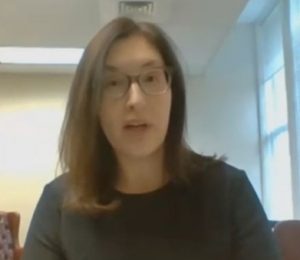 SPRINGFIELD – Gov. J.B. Pritzker warned Monday, Nov. 23 of another looming economic crisis for the state and nation if Congress does not act soon to reauthorize extended unemployment benefits for people displaced from their jobs due to the COVID-19 pandemic.

“I can’t overstate the implications of this,” Pritzker said during his daily COVID-19 briefing. “Without assistance from Congress, five weeks from now there will be no way to replace these benefits for the hundreds of thousands of Illinoisans impacted by these programs, which have become an essential lifeline for people who lost their jobs due to the pandemic. This is incredibly dire.”

Pritzker was referring to two programs created under the federal Coronavirus Aid, Relief and Economic Security, or CARES Act, which Congress passed in March.

Both of those programs are 100-percent funded by the federal government, although they are administered through state unemployment agencies like IDES, and both are set to expire Dec. 26.

According to U.S. Department of Labor data, more than 204,000 Illinoisans filed new claims for extended benefits under PEUC during the last week of October while another 177,000 self-employed workers were receiving continuing benefits under PUA.

Those numbers were in addition to the more than 337,000 Illinoisans who were receiving continuing benefits under the traditional unemployment insurance program at the end of October.

The Illinois Department of Employment Security reported last week that the state’s unemployment rate fell to 6.8 percent in October, down from 10.4 percent in September. At the same time, however, the total number of nonfarm jobs in the state declined by about 1,100, to just over 5.7 million, a sign that a large number of people have fallen out of the workforce.

Although the Democratic-controlled U.S. House passed a bill earlier this year to extend those programs as part of a broader economic stimulus package, the Republican-controlled Senate has not.

Among the issues separating the two sides is whether to provide direct financial help to state and local governments, which many Republicans in the Senate oppose, and whether to provide employers with civil immunity from lawsuits by workers who contract COVID-19, which Republicans have sought but many Democrats oppose.

“So unless the Republican Senate gets a stimulus bill moving in December, Republicans will be putting a big lump of coal in the Christmas stockings of a whole lot of American families,” Pritzker said.

Amid the surge in unemployment claims during the pandemic, IDES has been beset with backlogs and delays in processing the unprecedented volume of claims coming in each week, but the head of that agency said it has been making significant progress to improve the work flow.

Kristin Richards, acting director of IDES, said that during the peak of the pandemic in May, the agency received about 1.8 million phone calls in a single week — or about three per second — with only about 100 staff workers to answer them.

Since then, she said, IDES added hundreds of in-house and contractual staff, set up a “callback only” system in which calls are returned in the order they were received, and implemented other changes to streamline the handling of calls based on the nature of a claimant’s issue. As a result, she said, many claimants are now receiving callbacks within seven to 10 days.

“There are complex issues in our adjudication process that may require some more patience,” Richards said. “But we’re happy to say that in many cases, claimants can hear from us within one to two weeks or less.”

Richards and Illinois Attorney General Kwame Raoul also noted that IDES has been dealing with an unprecedented volume of fraudulent claims, mainly as a result of nationwide data breaches that have enabled some to file claims using stolen identities and Social Security numbers.

“I myself can attest that anyone can be targeted by these scammers because I myself received a phony debit card in the mail,” Raoul said.

Raoul reminded Illinoisans that if they receive anything in the mail about an unemployment claim that they did not file, either a debit card or a letter saying they’ve been approved for benefits, it likely means that an application was filed by an identity thief, and the recipient should not try to access those benefits.

He advised all Illinoisans to closely monitor their financial accounts and credit reports and to put a freeze on their credit cards if they suspect improper activity.

Information about how to report suspected identity theft and how to protect a consumer’s information is available on the Attorney General’s website.