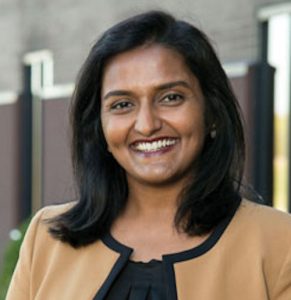 Officials from Peoria County on Wednesday, May 13 unveiled their own COVID-19 reopening plan that breaks up north-central Illinois into a sub-region of 11 counties, which officials say will allow the area to take a more localized approach that protects public and economic health better than the state’s plan.

The proposed plan, which Peoria officials have dubbed “Restore Heart of Illinois,” seeks to amend Pritzker’s 4-region “Restore Illinois” plan by carving out an 11-county area within the 27-county North-Central region, which would include the metropolitan centers of Peoria and Bloomington.

The sub-region, which is based on commuter data, would include Peoria, Tazewell, Woodford, Fulton, Marshall, Stark, McLean, Livingston, Bureau, Putnam and LaSalle counties.

“They’re not really that different,” Peoria County Public Health Administrator Monica Hendrickson, who also has a background in epidemiology, said of the three-stage sub-region plan and the state’s five-phase plan.

“The difference is really in the details where, depending on the entity, we are asking for variations to maybe bring forward something that might not be seen until Phase 3 of recovery earlier in a stage,” Hendrickson said. “Likewise, we might also have things within a stage that line exactly with what the governor’s public health approach is as well.”

Hendrickson announced the plan May 13 during a virtual news conference with Peoria Mayor Jim Ardis and Peoria County Board Chairman Andrew Rand.

The sub-regional reopening would rely on many of the same metrics the Illinois Department of Public Health is using, such as health care system capacity and trends of new cases. However, it weaves together certain parts of the middle three phases of Pritzker’s five-phase plan — which has the entire state in Phase 2 until the end of May. 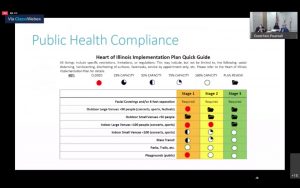 During a videoconference on May 13, Peoria County officials explained their sub-regional proposal to the state to reopen an 11-county chunk of Central Illinois independent Gov. J.B. Pritzker’s Restore Illinois plan.

Stage 1 of three under the sub-regional plan would allow most businesses and organizations — including retail shops, restaurants, personal care businesses and places of worship — to open their doors at 50 percent occupancy. Gyms would be allowed open at 25 percent capacity.

After three consecutive weeks of acceptable virus mitigation, Stage 2 would increase maximum occupancy to 75 percent for most facilities and 50 percent at gyms and places like movie theaters, bowling alleys and museums.

Stage 3 would open most establishments to full capacity with various restrictions on physical contact. All stages include 6-feet social distancing and mandatory face coverings. There are also accountability measures that can put the sub-region on pause in a stage or move it back a stage.

“We really feel strongly that the sub-regions that we’ve identified don’t dilute anything from (Pritzker’s) plan and actually could make it stronger with the accountability measures that are put in place,” Ardis said.

Local officials in the Peoria area, including mayors and village presidents, voiced their support during Wednesday’s videoconference.

“We have to do something for these small businesses that are truly underneath at this point,” said Mayor Gary Manier of Washington, with a population of about 16,000 in Tazewell County. 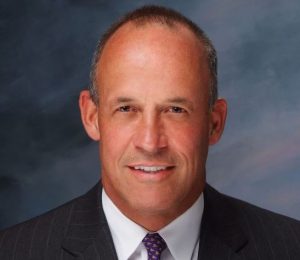 Ardis said the plan has been sent to Pritzker and IDPH for consideration, but he added officials still intend to move forward even if the state says no. He said it would take about a week to 10 days to implement the plan.

“All of the metrics of the governor’s outline have either been met or exceeded for several weeks now,” said Rand, the county chairman, “and we interpret that as a very good sign here in terms of the health and containment of the crisis in our community.”

Peoria County is not the only locality looking to chart its own path back to normal. Madison County, home to more than 250,000 people across the river from St. Louis, gave establishments a partial green light on Tuesday night during a board of health meeting.

Restaurants, retail shops and gyms were allowed to reopen Wednesday at 25 percent capacity in Madison County, which includes Edwardsville and Alton. Salons and barber shops can reopen to customers by appointment.

Also on May 12, the Grundy County Board requested that Pritzker move the rural northern Illinois county from Restore Illinois’ Northeast region – which includes coronavirus-ravaged Cook County — and place it in the North-Central region. 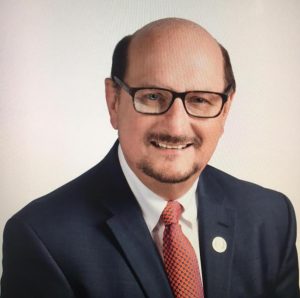 “This pandemic is not over, and to pretend otherwise in a misguided attempt to reclaim what we’ve lost will only make this last longer,” he said during his daily COVID-19 briefing.

“For leaders, there are no easy decisions in a pandemic. … And I have sympathy for them in that struggle,” Pritzker continued. “But what I don’t have sympathy for is those so intent on disregarding science and logic, so afraid to tell their constituents what they may not want to hear, that they put more people’s lives at risk.”

“Businesses and individual professionals that are licensed by state agencies will be held accountable for breaching public health orders,” Pritzker said. “Counties that try to reopen in defiance may not be reimbursed by FEMA for damages they cause because they ignored the law. Local law enforcement and the Illinois State Police can and will take action.”

Mayor Ardis said that Peoria officials are not going to command businesses to disobey the state if they are afraid of losing licenses.