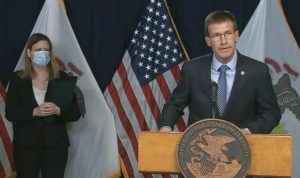 CUTLINE: Chuck Sullivan, president of the Associated Fire Fighters of Illinois, speaks during a news conference Monday in Chicago about the state’s response to the coronavirus pandemic. Alice Johnson, executive director of the Illinois Nurses Association, waits to address updates to the Illinois workers’ compensation law that allows for the “fair and reasonable presumption that a nurse who becomes infected with COVID-19 during this crisis became infected on the job, (Credit: blueroomstream.com)

SPRINGFIELD – Certain essential workers in Illinois who believe they contracted COVID-19 on the job will now be automatically covered by workers’ compensation.

Gov. J.B. Pritzker made the announcement Monday, April 13 as the state reported that new cases of COVID-19 in Illinois increased by more than 1,000 for the eighth straight day, jumping 1,173 to a new total of 22,025, according to the Illinois Department of Health. Deaths rose 74 to a total of 794.

Eighty-seven of Illinois’ 102 counties have reported cases. More than 105,000 people have been tested.

Illinoisans injured on the job normally must prove their illness or injury was directly caused by their duties. But in an emergency ruling Monday, the Illinois Workers’ Compensation Commission ordered that “COVID-19 first responder(s) and front-line worker(s)” who say they contracted the illness because of their job will automatically be presumed to be telling the truth so they can receive workers’ compensation benefits.

“We owe (essential workers) a debt that we can never fully repay. But to start, we can give them the peace of mind to know that they will be covered if they fall ill on the job,” Pritzker said during his daily COVID-19 briefing Monday in Chicago.

The ruling, which can last up to 150 days, applies to many of the “essential workers” defined under Pritzker’s stay-at-home order. They include health care workers, police and fire personnel, corrections officers, grocery store workers, food producers and postal workers.

“As a result of their sacrifice, nurses in Illinois are starting to get sick and infected,” said Alice Johnson, executive director of the Illinois Nurses Association. “Sadly, we have seen some employers argue with nurses about where they became infected, completely ignoring the obvious risk created by the work that they do every day.”

Johnson said more than 200 doctors and nurses worldwide have died because of COVID-19 exposure on the job. At least one employee of an Illinois health care facility has died from COVID-19, when a Joliet nursing home worker died earlier this month.

“Due to this change, there will now be a fair and reasonable presumption that a nurse who becomes infected with COVID-19 during this crisis became infected on the job,” she said, “which will then ensure that she receives the workers’ compensation benefits that are rightly deserved.”

“Firefighter EMTs and firefighter paramedics are the first link in the public health system, especially as they protect their communities during this pandemic,” he said. “We often respond to uncontrolled environments on a daily basis, and that’s created a unique set of exposures during this public health crisis.”

Some essential workers are not included in the commission’s ruling, including members of the media. Pritzker said the commission “could consider” expanding the list of workers, but “we felt like the people who are in the very front lines, most exposed, those are the people who want to make sure got covered first.”

A group of nine business organizations, including the Illinois Manufacturers’ Association, Illinois Retail Merchants Association and Illinois Hotel and Lodging Association, came out against the commission’s ruling.

“This commission chose to suddenly impose a drastic policy change that will significantly increase costs and require employers to pay for medical expenses and salary benefits if an employee is diagnosed with COVID-19 without proof the illness was contracted at the workplace,” the group said in a statement.

“Many of these industries are waiting for relief from the federal and state government in an attempt to make payroll and retain workers,” the statement continued, “but will now be on the hook for additional costs if they’re lucky enough to reopen when the governor’s stay-at-home order is lifted.”

Pritzker said the added cost is a necessary sacrifice during this emergency.

“In the middle of an emergency, the only way that you have to operate is to protect people as best you can, their health and safety,” Pritzker said. “And to the extent that it is required that someone has to pick up the tab for that, sometimes that will fall on the people who are most able to pick up the tab.”

The Illinois Workers’ Compensation Act requires all employers to offer workers’ compensation insurance. Depending on the injury, benefits may include medical expenses, two-thirds salary, disability benefits and more.

The Act does not allow a worker to collect benefits if their injuries were self-inflicted – if they instigated a fight, for example – or if the worker was injured while violating company policy or committing a crime.

Gov. JB Pritzker hinted during his Monday briefing that he and his team are mulling a gradual return to normalcy, saying that “it’s likely that there will be adjustments to the orders that we’ve put in place.”

“We want to lift these orders as soon as we can. We want to get things back to normal as soon as we can,” the governor said. He stressed, however, that doctors and scientists will need to weigh in and that “it’s not like we’re anywhere near” herd immunity or a treatment for COVID-19.

Pritzker said that every day he and his team look at the numbers and ask about the direction the curves of cases and deaths are headed. Although “the curve seems to be leveling,” Pritzker said, “we haven’t gotten there yet.”

“In order for you to get to a point where you want to start moving significantly back to normalcy, you need widespread testing,” he said, as well as a contact tracing system that identifies infected people and notifies who they came in contact with.

Pritzker added that widespread testing has yet to happen anywhere in the U.S., especially Illinois, where the state has yet to meet its testing goal of 10,000 per day.

Pritzker also stressed that he has yet to come to a decision on whether to lift or extend the stay-at-home order when it ends April 30, but in a hypothetical first phase of opening up the state, he would be asking questions such as, “What rules do you have to put in place?” “Does everybody wear a mask,” and “What are the rules for each industry?”

“A manufacturer is very different than a clothing store,” he said.

Pritzker asked rhetorically whether occupancy for each store should be based on square footage, like how fire marshals set maximum occupancies.

“Do we now need to have a public health administrator determining how many people at any given time can be in a certain store for us to reopen those stores?” he asked.

Pritzker added that he has been talking with industry leaders on how to protect health and safety while also getting businesses back open.

Pritzker also addressed a Monday tweet from President Donald Trump in which he said the “decision to open up the states” is “the decision of the president” and not of the individual states that issued their individual orders.

“I think he’s going to issue some advice about it. But it is true that it’s up to the governors to make decisions about the executive orders that we’ve put in place,” Pritzker said.

Legal experts have also pointed out that Trump’s claim runs contrary to the 10th Amendment, which says that powers not specifically given to the federal government are reserved for the states. Those powers include policing citizens and regulating public welfare, which stay-at-home orders do.