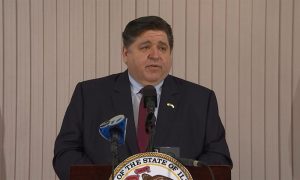 SPRINGFIELD – Vaccine operations and eligibility are expanding across the state as Illinois’ seven-day rolling positivity rate remained at 3.3 percent for the fourth consecutive day Thursday, Feb. 11.

While touring an Illinois Department of Human Services vaccination site at the Elgin Mental Health Center Thursday, Gov. J.B. Prtizker announced that over the last week, Illinois was the number one state among the top 10 most populous states in the nation for per capita vaccinations.

“And although Illinois is the sixth largest state in the country, we have now administered the fifth most vaccinations among all of the states,” Pritzker said. “Those are things to be very proud of.”

As of Thursday, a total of 2.3 million doses of the Pfizer-BioNTech and Moderna COVID-19 vaccines have been delivered to the state.

Of those, 1.9 million doses have been delivered to health care providers and 456,100 have been allocated to the federal government’s Pharmacy Partnership program for long-term care facilities.

On Wednesday, Feb. 10, 69,029 vaccine doses were administered. More than 1.5 million doses of the COVID-19 vaccine have been administered in Illinois, including 226,974 for long-term care facilities.

The seven-day rolling average of vaccines administered in the state is 56,094 doses.

Each of the three teams are made up of eight people from all over the country, and will support county call center operations in making vaccination appointments as well as assisting various organizations with community outreach to seniors and other eligible populations about the availability of the vaccine.

“My administration’s vaccine plan prioritizes equity and accessibility for all Illinois residents and federal resources like the Disaster Survivor Assistance teams will help support community outreach efforts with a keen focus on underserved populations,” Pritzker said in a statement. “Local health departments are on the front lines of this initiative and it is critical that we provide them any and all support they need.”

The last time DSA teams were deployed to Illinois was in 2013, when tornadoes and severe storms devastated areas of the state.

The state reported 2,838 new confirmed and probable cases of COVID-19 Thursday out of 96,525 test results reported, including 102 additional deaths.

As of Wednesday night, 1,954 COVID-19 patients were reported hospitalized in Illinois, the first time that number fell below 2,000 since Oct. 14. There were 448 patients reported to be in intensive care unit beds and 227 reported on ventilators.

The state reported a total of 1.15 million COVID-19 cases of 16.9 million total test results, including 19,841 total deaths across the state’s 102 counties since the pandemic started.