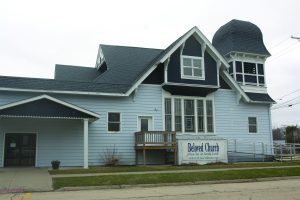 Parishioners at Beloved Church in Lena attended a service there Sunday, May 3 in defiance of Gov. J.B. Pritzker’s stay-at-home order that limits gatherings to fewer than 10 people. The church filed suit last week seeking to block the order, but a federal judge ruled Sunday the executive order is constitutional. (Credit: Dan Stevens of Village Voices)

SPRINGFIELD – A federal judge in Illinois ruled Sunday, May 3 that Gov. J.B. Pritzker’s stay-at-home order is constitutional, even though it interferes with people’s right to gather in large numbers for worship services.

In a decision that came just three days after the complaint was filed, U.S. District Judge John Z. Lee acknowledged that the freedom of religion is a “foundational” right and that the order does, in fact, interfere with the free exercise of that right.

“But even the foundational rights secured by the First Amendment are not without limits; they are subject to restriction if necessary to further compelling government interests — and, certainly, the prevention of mass infections and deaths qualifies,” Lee wrote. “After all, without life, there can be no liberty or pursuit of happiness.”

He noted that more than 60,000 Americans have died from COVID-19, “more than the number of people who perished during the 9/11 terrorist attacks, Pearl Harbor, and the Battle of Gettysburg combined.”

The suit was filed on Thursday, April 30, by the Beloved Church in Lena, a village in Stephenson County, and its pastor, Stephen Cassell. It sought to permanently block Pritzker’s latest, revised stay-at-home order, which went into effect May 1.

Under that revised order, churches may hold public services in groups of 10 or fewer as long as they follow social distancing requirements. Despite that, the church reportedly held its regular service on Sunday. WREX-TV in Rockford reported that a public relations firm representing the church said churchgoers were provided hand sanitizer and family units were spaced 6 feet apart.

As of Monday, according to the state’s COVID-19 website, there have been 63 cases of the disease in Stephenson County, but so far, no deaths.

The Beloved Church case is just one legal challenge seeking to overturn the stay-at-home order. Republican Reps. Darren Bailey, of Xenia, and John Cabello, of Machesney Park, are both challenging the order in state courts.

A circuit court judge in Clay County last week ruled in favor of Bailey’s complaint that the order violated his civil rights. But while that case was being appealed, Bailey asked that the order be vacated and the case returned to circuit court, where he plans to file an amended complaint.

Cabello’s suit challenges the legality of the order as a whole and is seeking to have it overturned statewide. A hearing in that case is scheduled for May 14 in Winnebago County.