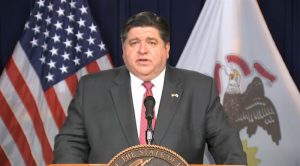 Gov. J.B. Pritzker announced from the James R. Thompson Center in Chicago Friday, Aug. 7 that his administration will file an emergency rule allowing for fines of businesses that flout capacity and face covering guidance. (Credit: Blueroomstream.com)

The rules “would provide multiple opportunities for compliance” regarding face mask requirements and capacity limits, including attempts to “educate” and warn the establishment before an order is issued for some patrons to leave the premises.

If the establishment is still not in compliance after those steps are taken, health officials can levy a Class A Misdemeanor charge and a fine ranging from $75 to $2,500.

Pritzker said all establishments in Illinois are beholden to capacity limits of 50 people or 50 percent of a building’s maximum occupancy, and schools must limit the number of people in one space to 50 or less.

Both the Illinois Department of Public Health and local authorities will have power under the rule to “seek cooperation with businesses in COVID-19 related investigations,” according to the governor.

The fines would apply to establishments — not individuals — and the governor’s office noted the rules focus on businesses, schools and child care establishments.

“These rules are a commonsense way to enforce mask requirements without jumping immediately to the extremely tough consequences that exist on the books today,” Pritzker said at a news conference announcing the rules in Chicago. “They’ll give local authorities a step-by-step guide on how to enforce masks and distancing, and an opportunity to help businesses act in good faith.”

He said the existing law allows for license revocations, which would be more costly than the fines allowed in the new emergency rules.

Because they are emergency rules, they can only be in place for up to 150 days. The General Assembly’s bipartisan Joint Committee on Administrative Rules, or JCAR, has the authority to review emergency rules, and would have to approve the rules if they are to be adopted long-term.

A previous effort to enact a similar policy for business fines failed in May as the Pritzker administration withdrew an emergency administrative rule after lawmakers said they would work on legislation detailing a fine structure. That legislation never came to a vote in the abbreviated May legislative session, however, as there appeared to be bipartisan opposition to such a rule.

While the governor has said lawmakers abdicated their responsibilities on the issue, on Friday, House Republican Leader Jim Durkin, of Western Springs, called on the governor to scrap the rule and work with lawmakers.

“Today, I am calling on Governor Pritzker to abandon his ‘mask rule’ and work with the legislature on this issue,” Durkin said in a news release. “I am committed to respecting his priorities while recognizing the undue hardship his current rule places on businesses that are already struggling across Illinois. To do this, the Governor should immediately call the legislature into special session where we can also address the urgent need for ethics reform and the controversies surrounding the Democratic Party and Speaker of the Illinois House of Representatives.”

The governor has previously said he does not plan to call a special session. Democratic leaders of the general assembly have not indicated they plan to do so either.

Pritzker suggested the emergency action will be different this time around, as the new version of the rule allows for education and warnings before the fine.

“What’s different about this rule is it focuses on warnings, and then a fine,” Pritzker said. “What’s available to us in the (existing) law is only essentially a misdemeanor immediately as a solution to the problem. And that was something that (Joint Committee on Administrative Rules) did not want us to move forward with, and so we made alterations.”

Pritzker made the announcement with various teachers’ union representatives, a restaurant trade group president and elected officials at the James R. Thompson Center in Chicago.

Sam Toia, president of the Illinois Restaurant Association, said the measure is necessary so that the state does not enter another stay-at-home order or mandate other closures in the hospitality industry.

“If we want to stay on a steady path and keep our progress with reopening, it’s up to every individual to work collectively towards a common goal,” Toia said. “It’s simple. If you choose not to adhere to public safety guidelines or house rules at businesses, your favorite restaurants, shops, bars, salons, hardware stores and more will pay the price.”

The governor also said the order will be important to enforcing mask requirements at schools.

“There are parents that are encouraging school boards in some areas of the state to open without masks. That is against the rules in the state of Illinois, and we now are giving the authority to county public health boards and county public health administrators to work with schools on improving those mitigations that they should have in place,” he said.

“I ask you, please, wear face coverings. Maintain social distancing. Do the right thing for your family, for your neighbors, for your community, and most of all, for the over 2 million students in the state of Illinois,” she said.

A trade group representing the state’s retailers released a statement later Friday opposing the rule, noting that the virus is increasingly spreading at private parties.

“This proposed rule lacks common sense and is a slap in the face to the thousands of retailers who have sacrificed so much during this pandemic while actively supporting ever-changing health and safety guidelines adopted by the state,” Rob Karr, president and CEO of the Illinois Retail Merchants Association, said in a statement. “…If the goal is to put public health above politics, the administration will amend the rule to focus enforcement efforts on individuals who are not complying instead of punishing and attempting to demonize innocent businesses.” 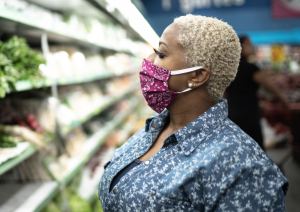 Both the Illinois Department of Public Health and local authorities will have power under the emergency mask rule to “seek cooperation with businesses in COVID-19 related investigations,” according to the governor. (Photo courtesy of Illinois Dept. of Public Health)

Pritzker also announced his signing of Senate Bill 471 on Aug. 7, a measure that amends the “aggravated battery” section of law to include the crime of assaulting or battering a retail worker who is fulfilling duties such as relaying health care or safety guidelines. That includes enforcing face covering policies.

The measure saw opposition in the General Assembly from some Democratic lawmakers who are opposed to all enhancements of criminal sentences.

Another portion of the bill extended a one-year recovery period by 60 days for eligible public employees – including firefighters and correctional officers – who are recovering from an on-the-job injury and their recovery is hindered, directly or indirectly, by COVID-19.

That bill also contained language which entitles employees of a horse track that intends to become a combined track-casino, known as a “racino,” to receive information about forming a union if the track is to receive a state license.